Heroes of the Faith: Thomas and the Eastern Apostles 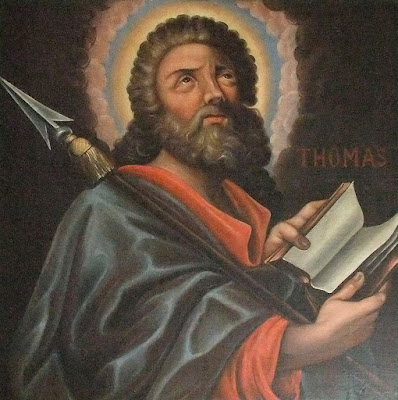 [After Jesus tells the disciples he is going back to the Jerusalem area:] Then Thomas (called Didymus) said to the rest of the disciples, “Let us also go, that we may die with him.” – John 11:16

Sing to the Lord a new song, his praise from the ends of the earth, you who go down to the sea, and all that is in it; you islands, and all who live in them. Let the desert and its towns raise their voices…let them shout from the mountaintops. Let them give glory to the Lord and proclaim his praise in the islands. The Lord will march out like a mighty man, like a warrior he will stir up his zeal; with a shout he will raise the battle cry and will triumph over his enemies. – Isaiah 42:10-13

Thomas has one of the most interesting and exciting stories of all the disciples. Within the New Testament, he is most notable as the apostle who had both the courage to want to die with Jesus (Jn. 11:16) and the skepticism to doubt his resurrection until he came face to face with the risen Christ (Jn. 20:24-28). Early tradition then tells us his story after the events of Pentecost. Like the rest of the disciples, he was assigned a mission field: in his case, India. Unlike the others, however, he dragged his feet about going—India was on the extreme edge of the known world, and he simply didn’t want to go. Eventually circumstances forced him to go, having been sold under contract as a skilled craftsman to help the Indian king Gundaphar build a new palace (in the region of Pakistan). Later, Thomas sailed down the western coast of India to Kerala, where he preached the Gospel and won 17,000 converts. There are still “Saint Thomas Christians” (the Mar Thoma Churches) in that region today. Thomas then crossed India by land to the eastern coast, where he evangelized again before being killed by a spear and buried in the city of Mylapore. The historical record of Thomas’ story is surprisingly strong.

The Story of Thomas and King Gundaphar

Having been sold as a bondservant to King Gundaphar (a real historical figure known for his building projects), Thomas was given a commission to build the king a great palace. Thomas quickly got to work, not in building anything, but in preaching the Gospel and dispensing the construction funds to the poor. After awhile, the king sent a messenger to ask Thomas how the work on the palace was proceeding. Thomas replied that the work was going well, but that more could be added to it. So Gundaphar sent even more money, which Thomas again distributed to the poor instead of using it for construction. Finally, King Gundaphar came in person and was told by some friends that no palace had been built. So he confronted Thomas: “Did you build me the palace I asked for?” “Yes,” Thomas answered, “I have built it.” Then the king demanded that Thomas bring him to the spot and let him see it. “You cannot see it now,” Thomas replied. “But when you depart this life, you shall see it.” Gundaphar is enraged and prepares to execute Thomas, but before he can do so his brother suffers a near-death experience in which he actually sees the heavenly palace that Thomas built for the king by giving alms with his money. His brother’s testimony convinces the king, and he forgives Thomas and becomes a Christian.

Bartholomew (usually also identified with “Nathaniel” of John’s Gospel), does not appear as part of the New Testament story after Pentecost. According to early tradition, this is because he, along with many other apostles, soon left the Jerusalem church to begin their missionary journeys. He had been assigned the regions to the east, in the direction of the Parthian Empire (modern Iran). So he evangelized through Mesopotamia and Parthia. One early tradition states that he even left a copy of the Gospel of Matthew, translated into Hebrew, with a group of Jewish Christians near the border of India. Like Thomas, he may have made it as far as India itself before circling back. His final mission field was the mountainous little country of Armenia (east of Turkey), which he undertook with his fellow disciple Jude Thaddeus. Like most of the disciples, he ended his life as a martyr. The most famous account says that he was arrested, held down, and then skinned alive. He is considered an apostolic founder of the Armenian church. Armenia is still largely Christian even though being in a Muslim region.

Jude Thaddeus (the disciple of Jesus, often simply called “Jude” or “Thaddeus,” but not the same as the Jude who wrote the book by that name in the New Testament), received as his mission field the regions immediately around Judea. Tradition tells us that he evangelized in the areas that are now Syria and Lebanon, as well as joining with Bartholomew for the mission to Armenia. After Bartholomew’s martyrdom, Jude partnered with another disciple, Simon the Zealot, for a final evangelistic tour. Jude was also martyred, killed with an axe in the city of Beirut. In later traditions, he was known as a man of powerful prayer, and many Orthodox and Catholic devotees respect him as “the patron saint of hopeless causes” for this very reason.

Although almost nothing is known about him from the New Testament, one early tradition claims that he was the bridegroom at the wedding in Cana (Jn. 2), and that he and his bride both became followers of Jesus after that miracle. After Pentecost, he became a missionary to Egypt and Libya before partnering with Jude Thaddeus in Lebanon, where he too was martyred, by being sawed to death.