Heroes of the Faith: Ignatius & Polycarp 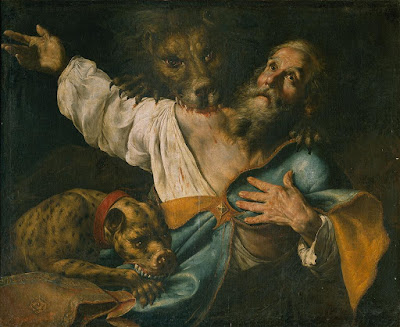 "If anyone would come after me, he must deny himself and take up his cross daily and follow me. For whoever wants to save his life will lose it, but whoever loses his life for my sake will save it." - Luke 9:23-24 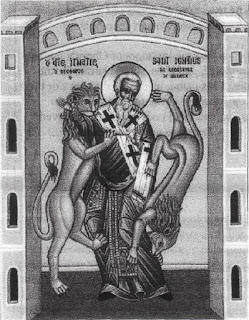 Ignatius of Antioch (c.30-108 AD) was an early Christian church leader and one of the earliest major Christian writers, a member of the post-apostolic generation known as "the Apostolic Fathers" (others of whom included Polycarp, Clement of Rome, Papias, and Hermas). Ignatius was bishop of the city of Antioch, one of the major early Christian centers. He was arrested and brought to Rome for trial, where he suffered martyrdom in the arena. Along the course of his final journey, however, he left a lasting legacy for the faith: a series of letters written to the churches which he was passing by, which give us a unique window into the life and practice of the early post-apostolic church.

"Grant me nothing more than to be poured out as an offering to God....It is good to be setting from the world to God in order that I
may rise to Him."  - Ignatius to the Romans 2:1-2

"Now at last I am beginning to be a disciple! Fire and cross and battles with wild beasts, mutilation, mangling, wrenching of bones, the hacking of limbs, the crushing of my body, cruel tortures of the devil—let these come upon me, only let me reach Jesus Christ!....Him I seek, who died on our behalf; Him I long for, who rose for our sake."  - Ignatius to the Romans 5:3-6:1 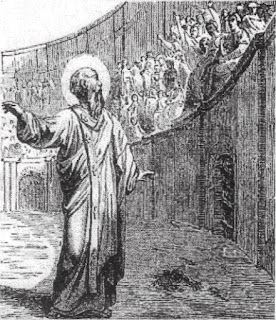 Polycarp (69-155 AD) was another member of the generation of Apostolic Fathers, one who had learned directly from the Apostle John (and his protege Papias) late in the disciple's life. He was the bishop of the city of Smyrna in Asia Minor, known as a beloved pastor and a great intercessor. He, like Ignatius, left some of his own letters as a part of his legacy, but he is most well known for the story of his martyrdom, which inspired generations of early Christians. At the age of 86, he was pursued out of the city, arrested while at prayer, and brought to trial in the arena, where he gave a winsome defense of the Christian faith before being burned to death.

Quotes from and about Polycarp:

"Let us become imitators of Christ's patient endurance, and if we should suffer for the sake of his name, let us glorify him. For this is the example he set for us in his own person, and this is what we have believed."  - Polycarp to the Philippians 8:2

"When Polycarp heard that his captors had arrived [to arrest him], he went down and talked with them, and those who were present marveled at his age and his composure.... Then he immediately ordered that a table be set for them to eat and drink as much as they wished, and he asked them to grant him an hour so that he might pray undisturbed. When they consented, he stood and prayed, so full of the grace of God that for several hours he was unable to stop speaking. Those who heard him were amazed, and many regretted that they had come after such a godly old man."  - The Martyrdom of Polycarp 7:2-3

(Polycarp's response when the magistrate asked him to renounce Christ:) "For eighty-six years I have been his servant, and he has done me no wrong. How can I blaspheme my King who saved me?" - The Martyrdom of Polycarp 9:3
Email ThisBlogThis!Share to TwitterShare to FacebookShare to Pinterest
Labels: Devotional Reflections, History
Newer Post Older Post Home