Heroes of the Faith: Gladys Aylward 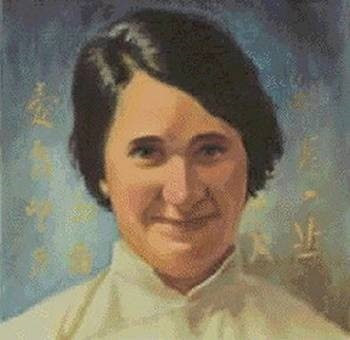 (Click here for an introduction and other installments of this series)
Lecture audio: Gladys Aylward
(click here to listen or right-click to download)
The King will reply, “Truly I tell you, whatever you did for one of the least of these brothers and sisters of mine, you did for me.” - Matthew 25:40

Be strong and courageous. Do not be afraid; do not be discouraged, for the Lord your God will be with you wherever you go. - Joshua 1:9
Gladys Aylward: Basic Facts
- Gladys Aylward (c.1902-1970) was a British missionary to China and Taiwan. She participated in evangelistic ministries, prison reform, and social action for the empowerment of women in Chinese society, but is most well known for her work with orphans.

- Her life story was popularized by the book The Small Woman (by Alan Burgess) and the somewhat inaccurate Ingrid Bergman movie The Inn of the Sixth Happiness.

- She is an outstanding representative of the many thousands of single women missionaries who brought the Gospel to the nations throughout the 20th century.
Timeline of Aylward's Life & Ministry: 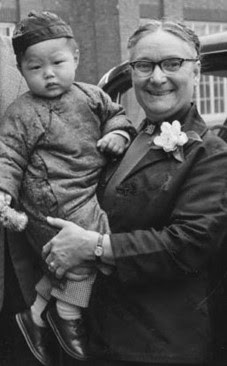 1920s – Gladys Aylward attends a revival service in her hometown of London, England, and commits her life to serving God as a missionary in China. While working as a parlormaid, she saves up as much money as she can and applies to the China Inland Mission, but is rejected from their program because of her lack of education as well as concerns about sending a single woman to a distant mission field alone.

1930-32 – Aylward hears of an elderly single missionary, Jennie Lawson, who is looking for a younger replacement to carry on the work of her mission station in Yangcheng, China. With not enough money to book passage on a ship, she has to buy a ticket to get there by rail, crossing thousands of miles of hostile territory on the Trans-Siberian railway. From eastern Russia she takes a ship to Japan, another ship from there to China, and then another train, a bus, and a mule to get to Yangcheng.

1933 – Jennie Lawson and Gladys Aylward decide to set up an inn as the venue for their evangelistic work, since Yangchen was on a well-traveled mule-train route. They offer food and lodging for both the mules and the mule-drivers, and during the communal suppertime, they tell stories about Jesus. Before long, some of the mule-drivers have become Christians, and the stories of Jesus are being told all up and down the mule routes. Unfortunately, Jennie Lawson passes away, and Gladys is left to manage the mission alone.

1934 – The mandarin (chief official) of Yangchen stops by the inn and makes Gladys an officer of his government, empowered to enforce the new anti-footbinding laws among local families. Gladys undertakes the job because of the good it does for local women, even though it was a job that often met with violent resistance, and she does it so well that she earns great respect from the mandarin.

1935 – Gladys is called to come down to the city prison, where a violent riot has taken broken out, with the prisoners now in control of the jail. The warden asks Gladys to go in and stop the riot. “Why do you think I can do this?” she asks. The warden answers: “Well, you’ve been teaching that those who trust in Christ have nothing to fear, so we figured you might be the only person not afraid to go in there.” So Gladys went in, calmed the riot, found out the prisoners’ grievances, and then led a campaign to give them profitable work and a healthier prison environment.

1936-37 – Gladys adopts a five-year-old beggar girl, buying her for nine pennies from the woman who had enslaved her. This girl, “Ninepence,” becomes Gladys’ first orphan child, and it wouldn’t be long before she had many more.

1938 – By this point, Gladys is in charge of an entire orphanage with a hundred children. But war is breaking out, and the Japanese begin their invasion of China. Although initially inclined to stay put in Yangcheng, she realizes that her children will be unsafe when she sees that the Japanese have put a price on her head. Taking the hundred orphans under her care, she sets out on a twelve-day hike through open country to get past the battlefront and safely back into Chinese-held territory. Their escape almost stalls at the final obstacle—the Yellow River—but they are finally able to cross over by a miraculous answer to prayer.

1938-40 – She remains in China during the early years of World War II—caring for her orphans, planting churches, and founding mission stations to aid lepers—before being evacuated by the British government.

1958-70 – After an unsuccessful attempt to return to China (which is now Communist), Gladys goes to Taiwan and spends the next twelve years running an orphanage ministry there.
Quotes:
[On finding out she had been rejected as a missionary by China Inland Mission:] “Well, Lord, here’s my Bible, here’s my money, and here’s me! Use me!”

“I don’t think I was God’s first choice for what I’ve done for China… It was probably supposed to be some well-educated man… But perhaps he wasn’t willing to go. And God looked down and saw Gladys Aylward, and said, ‘Well, she’s willing.’”

“These are my people; God has given them to me; and I will live or die with them, for Him and His glory.”
Posted by Matthew Burden at 8:15 AM No comments: