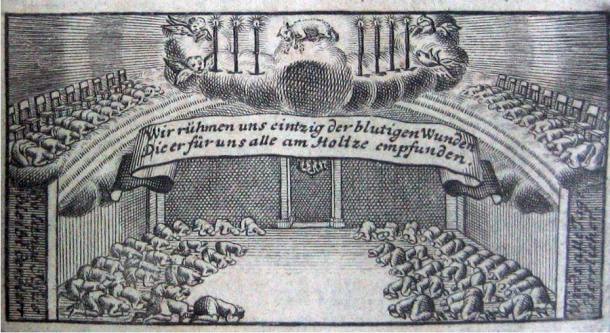 Even though all prayer is communal in light of the mystical “communion of the saints,” that doesn’t mean that we can give up on the actual practice of communal prayer in the presence of one another. Throughout Christian history, it has been repeatedly shown that communal prayer has a strength all its own. The first believers in Jesus were all gathered together in the upper room in constant prayer, and then came the power of the Holy Spirit at Pentecost. Later on in the book of Acts, the believers were all gathered together in prayer when Peter’s miraculous deliverance from prison took place (12:5-12), and at another communal prayer meeting, their prayers were evidently so powerful that the entire house was shaken (4:31).
There’s an old story that comes down to us from the desert fathers, those heroes of the faith from the 3rd century onward who decided to live as exemplary a Christian life as they possibly could by retreating into the desert to participate in prayer, the study of Scripture, and spiritual warfare. One hermit, after several years of devoting himself to prayer, was feeling pretty good about the power and effectiveness of his prayers. The Lord granted him a vision in a dream of what his prayers looked like: he saw himself at prayer, and flitting upwards towards heaven were bright little sparks, symbolizing his prayers. At first he was cheered by this pleasant and encouraging image. But then the vision shifted, and he could see the nearby church engaged in one of their services of prayer. Instead of little sparks flitting heavenwards, here was a vast column of flame, filling up the sky as it burst up toward the throne of God. The hermit was duly chastened by the reminder—as powerful as one man’s prayers might be, they are nothing compared to the unified prayers of the people of God in worship.
One of the other great stories about persistent, communal prayer comes from the Moravian Christian community at Herrnhut, Germany in the 1700s. Led by Count Ludwig von Zinzendorf, they devoted themselves to the passionate pursuit of Christ, and began to operate a continuous prayer watch. Members of the community would take up a rotation so that there would always be some Christians at prayer together in Herrnhut, 24 hours a day, 7 days a week, 365 days a year. The Moravians carried out this prayer marathon not only for one or two years, but for an entire century. And in those hundred years, God used the Moravians to help launch the Golden Age of Protestant missions, bringing the Gospel to the ends of the earth, as well as playing a role in sparking the Great Awakening in Britain and America. Moravian missionaries became the first wave of the Protestant global church, selling themselves into slavery to bring the Gospel to the West Indies even before William Carey, heralded as “the father of modern missions,” ever dreamed of going to India. Moravians were also instrumental in bringing the great preacher John Wesley into a new and dynamic experience of faith in Christ early in his adulthood, and Wesley and his followers would go on to spark the Great Awakening on both sides of the Atlantic. All of this began with a prayer meeting in Herrnhut.
Another famous prayer meeting came in 1806, when five students at Williams College, in Massachusetts, met outdoors to talk about theology and missions service. A thunderstorm blew up quickly, and they took refuge under a haystack and there began to pray for the cause of the Christian missionary endeavor. Those students were so inspired by the events of that day that they decided to form the American Board of Commissioners for Foreign Missions—the end result being that this humble little prayer gathering, “the Haystack Prayer Meeting,” became the launching-point for the entire missionary endeavor that would blossom from the eastern United States over the subsequent decades and send the Gospel to the farthest reaches of the globe.
Persistent, communal prayer can also be shown to have been at the root of many of the greatest revivals in Christian history, including the Azusa Street Revival that launched the worldwide explosion of Pentecostal Christianity. Many of the most influential ministers of the Christian tradition, like Charles H. Spurgeon, “the Prince of Preachers,” who held captive audiences of thousands of skeptical Londoners in the late 1800s with his fearless and eloquent proclamation of the grace of God, claimed that the real credit for their success in ministry was due to the power of others’ prayer—in Spurgeon’s case, a group of his parishioners who met together to pray for him while he was preaching, gathered in a prayer-room that lay directly beneath his pulpit.
In all of these instances, and many more besides, one lesson can be gleaned—the gathered prayer of the people of God is a powerful and compelling thing, perhaps the most powerful human-driven force in the world, in that it invokes the limitless power of God. For this reason, “pray in the Spirit on all occasions with all kinds of prayers and requests” (Eph. 6:18), and “do not give up meeting together” (Heb. 10:25). Prayer really can change the world.
Email ThisBlogThis!Share to TwitterShare to FacebookShare to Pinterest
Labels: Church Life, Devotional Reflections, Prayer, Theology

A Flame in the Night, Chapter 34