Bible Study Resources: What Does the Book of Acts Teach about Receiving the Holy Spirit? 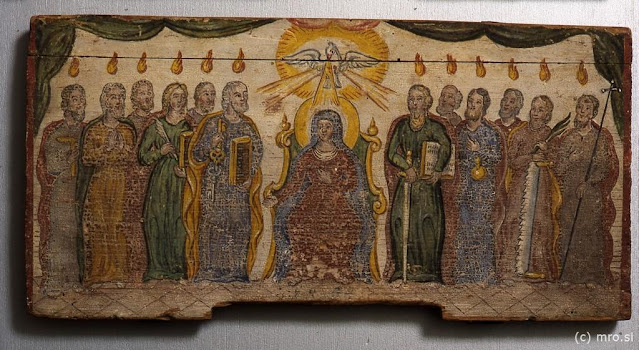 This is a series of charts I designed for a doctrinal sermon I gave at my church, examining the teaching of the book of Acts on the question of whether Christians are called to receive the Holy Spirit in a particular manner or way. You can access the original handout here, and listen to the sermon here.

1.)    In every instance in the Book of Acts where the Holy Spirit is poured out in outward and ecstatic manifestations (such as speaking in tongues), it involves a group event (and interestingly, never in an individual conversion). Specifically, each time it happens, it marks the establishment of the church within a new ethnic or religious group: Jews, Samaritans, Gentiles/pagans, and heretics.

2.)    After the initial experience of Pentecost, which occurred entirely within the Jewish group of Jesus’ original followers, the other three occurrences were with groups that the church would have had reason to be suspicious of:

a.       Samaritans – Jews and Samaritans had notoriously bad relations (the disciples even offered once to call down fire on a Samaritan village after it had rejected Jesus in the Gospels!); they were regarded as ethnic half-breeds and religious heretics.

b.      Gentiles – The Jews’ obligation to remain separate from Gentiles was hardwired into their religious consciousness, and so it comes as a tremendous shock to the early Jewish church that the Gospel of Jesus is meant to include the Gentiles.

c.       Heretics – These followers of John the Baptist only have a portion of correct doctrine and not the whole, and so the early church would have regarded them very cautiously, since heretical groups like this were a regular problem in the first few centuries (in fact, followers of John the Baptist who did not become Christ-followers did actually end up creating their own separate religion, Mandaeism).

3.)    Because of this pattern, it might be the case that God used these large-group outpourings of the Holy Spirit with ecstatic gifts like speaking in tongues (a replication of the original Pentecost event) to assist the established church in understanding that yes, even these dubiously-regarded groups were really being welcomed into the covenant-family of God. This pattern is most clearly seen in the Cornelius story, where it is the replication of Pentecost phenomena that convinces the Jerusalem church to start accepting Gentile converts.

4.)    As such, the book of Acts does not offer theological support for the position that holds that each individual Christian must, on conversion, have a Pentecost-type experience of the Holy Spirit with ecstatic manifestations. That’s not to say that such experiences will never happen to an individual, since Paul makes it clear in his letters that some Christians (but not all) do actually receive the gift of speaking in tongues (1 Cor. 12:4-11; 28-31); but it does mean that we cannot make ecstatic spiritual gifts the expected benchmark for authentic conversion. In Acts, such outpourings appear to happen only in a few situations: specifically, the establishment of the church in a new ethnic or religious group, for the purpose of authenticating their conversion in the sight of the wider family of Christians.

1.)    In regard to the question of whether Acts presents the experience of being filled with the Spirit, accompanied by ecstatic gifts, as a necessary and expected part of individual conversion, the answer appears to be “no.”

a.       The last column on the “conversion stories” chart lists all of the conversions recorded in Acts (aside from the group-focused “Pentecost events” dealt with in the first chart), and in none of them are ecstatic phenomena like speaking in tongues recorded.

b.      The next-to-last column lists all the occurrences of conversion stories being associated with “receiving” or “being filled” with the Holy Spirit. In the vast majority of cases of individual conversion, this is never mentioned. The two exceptions are when Peter tells people that those who convert will receive the gift of the Spirit (apparently as an automatic endowment upon believing and being baptized) and Ananias telling Paul that he will be filled with the Spirit upon his conversion to Christianity (and in Paul’s case, this “filling” seems to be connected with his calling as a missionary and his early preaching work, which are described immediately before and immediately after Ananias’ conversation with him).

2.)    The one constant in the book of Acts when it comes to being saved is believing. This fits perfectly with Paul’s message in his epistles, that the single thing necessary for salvation is faith.

3.)    In the majority of cases (but not all), baptism is also described as the next step. In the places where baptism is not actually mentioned, it’s probably simply assumed. But, as Baptist doctrine teaches, it’s clear that baptism isn’t actually the thing that saves you (consider, for instance, the Gentiles’ “Pentecost event” at Cornelius’ house—they are clearly saved and filled with the Holy Spirit before receiving water baptism). Even though baptism is not what saves you, there is no indication in Acts or anywhere else that it is optional for Christians: it is the expected physical enactment of one’s decision to believe.

4.)    Even though Acts seldom mentions individual converts being “filled with the Spirit” (outside of the major “Pentecost events”), the New Testament as a whole does teach that receiving the Holy Spirit is part of the conversion experience. But it is usually portrayed in the way that Peter states in his sermon: as a gift of God, given upon believing in Jesus, not as a “next step” of something that the believer needs to do or achieve in order to be really saved (see Eph. 1:13). In Baptist doctrine, we teach that Christians are indeed given the gift of the Holy Spirit the moment they are saved and that they are endowed with spiritual gifts for the edification of the church (some of which may or may not include ecstatic gifts, as Paul indicates in his long discussions in 1 Corinthians).

References to being “filled with the Spirit” –

Assessing Acts’ Portrayal of Being “Filled with the Spirit” –

1.)    Being “filled with the Spirit” does not usually refer to conversion or to the use of ecstatic spiritual gifts.

a.       The only occasion in which being “filled with the Spirit” is connected with conversion is in the case of the Apostle Paul, and a good argument can be made there that the reference is to Paul’s empowerment for the ministry to which God had called him. (Peter also promises the Holy Spirit to those who believe his sermon on the day of Pentecost, but the language of “being filled” isn’t used there.) In every other instance, being “filled with the Spirit” does not refer to conversions, but to the ministry efforts of Christians.

b.      Similarly, ecstatic phenomena are usually not recorded in these cases of being filled with the Spirit. There are three exceptions, each which also appear to be connected with the Spirit’s empowerment for a climactic moment of ministry: the Christians speaking in tongues and preaching at Pentecost; Stephen’s vision of Christ at the end of his sermon; and Paul’s act of judgment in striking the sorcerer Elymas blind.

2.)    All told, the occasions of  being filled with the Spirit in Acts seem to refer to one of two things:

a.       A general description of a particular Christian’s character (in Acts, being “filled with the Spirit” is often immediately connected with a fruit of the spirit, like joy or wisdom).

b.      A sense of boldness and power in the public proclamation of the Gospel that comes upon the apostles or missionaries when they are speaking. In this, it is very similar to what happens in the Old Testament, when the Spirit “comes upon” a judge or prophet and empowers them for a great act of ministry. This use, then, refers to an occasional empowerment, and not necessarily a constant state of experience in the Christian’s life. It is possible, but not assured, that ecstatic spiritual gifts may accompany this occasional empowerment.

3.)    Based on these usages, the book of Acts lines up with what the rest of the New Testament teaches:

a.       That all Christians are temples of the indwelling Holy Spirit;

b.      That some Christians, who have allowed the Holy Spirit to manifest his presence through the growth of spiritual gifts and “the fruits of the Spirit,” may be referred to as “full of the Holy Spirit” in a general sense;

c.      That there are moments in our lives where we may feel or experience the Spirit’s presence more powerfully, especially when we are being prepared or equipped for a particular ministry, and these moments may or may not be accompanied by powerful supernatural manifestations.