(This is a series of notes that I assembled into a handbook for myself during my last year of seminary, in preparation for stepping into church leadership. I've found them helpful to keep in mind during church conflict situations, so I provide them here in the hope that they might prove similarly helpful to others.) 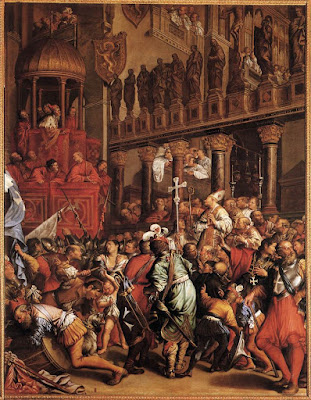 · Build a ministering laity (who feel that the ministry is theirs, and not just the pastor’s), not just a busy laity

· Be clear about the authority structure of the church, and base it on biblical principles

· Do your best to align your attitude with the biblical ideal from Phil. 4:2-9:

o Rejoicing in the Lord always

o Your gentleness evident to all

o See things as they really are

· Don’t cling too tight to your own individual “rights”—clinging to rights causes offense when those rights are trampled, but the Bible focuses more on individual responsibilities than on rights

· Be proactive and public about confession when you fail

o Address everyone involved, everyone who may have been hurt

o Avoid “if,” “but,” and “maybe”—don’t be afraid to be clear about your own culpability

o Acknowledge the hurt that was caused, to show that you understand the feelings of the people you’re addressing

o Ask for forgiveness, and allow time for those you address to process it

· Practice returning good in place of evil, of extending grace to those who wish to tear you down

· Seek out godly advisors and listen to them
Deal Well with Criticisms:
· Thank the critics for their candor & concern

· Consider the spirit in which the criticism is given (if in honest helpfulness, don’t just brush it aside)

· Consider hot anger from the critic a sign of possible unspoken, underlying issues

· Consider it in conversation with a few trusted friends and advisors (if there is a tendency for a criticism to weigh heavily on you until it has been processed out loud, then seek to do this step sooner rather than later)

· If the fault lies on the side of your critics, keep in mind a vision of what they can become rather than what they now are

· Pray for your critics

· Be gentle but firm in your responses

· Sometimes it’s best not to react immediately—give it time

· Keep perspective on the big things—the work of the ministry, the Kingdom of God, and so on

Be Alert for Warning Signs of Possible Conflict Brewing:
· Inaction on a longstanding problem—impatience and resentment might build up

· Consider “problem people” as possible clues to unspoken rules in the congregation that you may be unknowingly breaking (this is especially important as a new pastor)
Posted by Matthew Burden at 5:00 AM