(This is a series of notes that I assembled into a handbook for myself during my last year of seminary, in preparation for stepping into church leadership. I'll be posting several sets of these notes over the next few weeks. I've found them helpful to keep in mind during church conflict situations, so I provide them here in the hope that they might prove similarly helpful to others.) 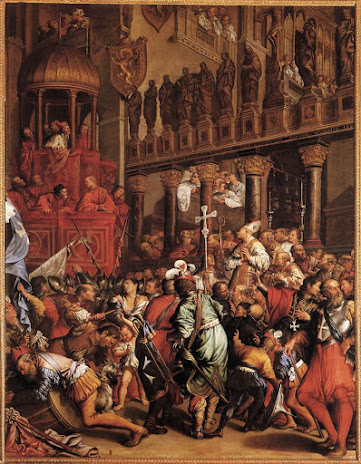 Part 1: The Truth about Conflict:
· It will happen—it’s simply part of human experience since the Fall

· Even the greatest and most godly leaders in the Bible faced conflict:
- Each of the patriarchs had significant times of conflict (Abraham with the king of Egypt, his nephew Lot, and Abimelech; Isaac with the kings and shepherds of the Canaan; Jacob with Esau and Laban; and Joseph with his brothers)
- Moses—conflict with the stubborn and rebellious Israelites, with influential leaders in the group, and even with Aaron and Miriam
- David—conflict with King Saul, and later with his own sons, and ongoing tension with his general, Joab, throughout his life
- Conflict defined the ministries of many of the OT prophets, like Elijah, Jeremiah, and Amos
-  Jesus himself experienced significant conflict and sometimes even initiated confrontations (Matt. 8:26; 21:12-16; 23; Luke 24:25-26)
- The apostles faced conflict over the treatment of Greek widows and over the larger question of Gentiles entering the church
- Paul faced conflict with Barnabas and Mark, with Peter in Antioch, and with Judaizers and other detractors all throughout his career
· God may permit conflict within his will for the church (we need not assume that conflicts are somehow a “falling short” from the will of God for a congregation)

· On the other hand, conflicts are also a dangerous time for a congregation, and Satan tries to use them to his advantage by fostering resentment and tearing Christians apart from one another (we cannot assume that conflicts occur only on the level of human relationships, without an element of spiritual warfare)

· Conflicts, when handled well, can be opportunities for growth in maturity and relationships, and can allow progress toward issues that needed to be addressed

Types & Causes of Conflicts:
· Territorial (an infringement by one party into another’s perceived sphere of control)

· Conflict-seeking personalities (either consciously or unconsciously, conflict follows them wherever they go)

Possible Positive Results of Conflict:
· Evidence of vitality (a complete absence of conflict might not be a good sign—conflict, at least, means that people feel a sense of ownership and involvement in the church. It shows that they care about what happens to the church.)

· Conflict permits venting of frustrations, rather than keeping them bottled up

Possible Dangers of Conflict:
· People are made aware of needed changes, without any real movement toward making those changes

· Gossip/backbiting
Posted by Matthew Burden at 5:00 AM