Note: This piece is the final part of a theology paper discussing various views of the nature of hell in the orthodox and evangelical Christian traditions. This article offers some general conclusions on the evangelical theology of hell. The previous weeks' pieces assessed the universalist, annihilationist, and traditionalist positions. Next week the ongoing series on foreshadowings of Christ in the Old Testament will resume. 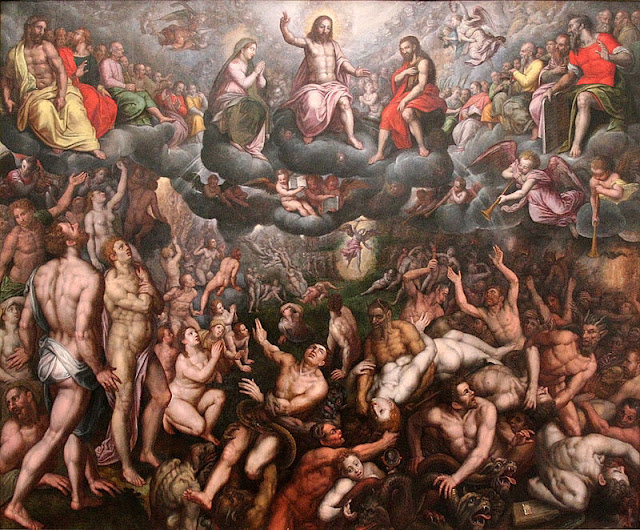 Universalism is usually rejected as an element of Christian dogma (that is, as a doctrine foundational enough and well-established enough to be taught as "Gospel truth") because it does not appear to do justice to either the full scope of Scriptural teaching or the force of church tradition. (There are some exceptions to this, however: for instance, universalism is a much more mainstream idea within the Eastern Orthodox tradition, and has been so ever since the patristic period.) Nonetheless, its logical and emotional arguments are compelling and profound. While it would be improper for the church to teach it as a doctrine (at least without giving the context of other interpretive options), honest Christians cannot help but hope that perhaps, in the mystery of God’s will, some of the bright optimism of universalism might in fact be true. This practice of holding out tentative hope is, I think, understandable and honorable (as even the staunch traditionalist J. I. Packer agrees). The error of universalism is not that it holds out hope, as all of us who have unbelieving friends and relatives probably do, but rather that it appears to “turn a dream into a doctrine.”[1] But one is still permitted to dream.

Annihilationism is taken to be more acceptable as a doctrine in most evangelical circles, since it deals so seriously and forthrightly with the full scope of biblical evidence. Clearly, one must accept the annihilationists’ argument that “destruction” is one of the major biblical themes in regard to hell. The further question, however, still remains: does reference to such destruction necessarily imply a cessation of existence, particularly in light of passages that are usually taken to imply otherwise? This is a debate that remains ongoing in biblical interpretation circles, and one which is worth following.

Those who accept an evangelical hermeneutic of Scripture usually tend to assign the upper hand to the traditionalist position, partly because of the respect it gives to the study of biblical arguments without flinching away from implications that might seem distasteful. However, traditionalists too often defend their position in an aggressive and dogmatic manner. While the question of hell is not inconsequential and thus ought to be debated and defended, traditionalists could learn something valuable about the emotional force of the question from universalists and annihilationists. Too often, traditionalists criticize the conditionalist positions as arising from sentimentality. Even if that were true (and most conditionalists would undoubtedly reply that it was the evidence, not sentimentality, that brought them to their position), that particular prejudice appears to assume rather blithely that one ought to be able to accept the everlasting torture of human beings as a fine and proper thing. The fact of the matter is that if one does not show some sentiment of horror and lament over the idea of hell, it betrays a lack of emotional understanding and calls into question that person’s experience of the love of God for all people. In the words of the Lausanne Covenant, “It is only with tears that hell is contemplated by those who reach out daily in love for sinners.”[2]

Of the variant positions within the traditionalist view, the idea of exclusion from the presence of God is clearly an element which ought to be central to our understanding of hell, as it echoes a clearly biblical refrain. And as a moderating position, the idea of gradations of punishment might do a decent job of upholding both the force of Scripture and a very real concern for justice and mercy. The idea does have some biblical foundation, and it parallels well with the commonly-accepted idea of gradations of reward in heaven. However, the evidence for this position is not conclusive, and so it must be held tentatively.

Finally, I see two main applications for ministry. First is the point just touched upon—hell is such a difficult question that it ought to be handled carefully and with great empathy. Despite all the teaching about hell in Scripture, there is a great deal that we simply don’t understand about it. The traditionalist position appears to have the strongest argument, but it often comes across as repulsive and extreme. It may be the case that our perspective here on earth is limited, and that in the age to come we will be able to see and understand hell in a way that dissolves all our objections. Until then, I think the advice of John Stott holds true: “We may, and I think we should, preserve a certain reverent and humble agnosticism about the precise nature of hell, as about the precise nature of heaven. Both are beyond our understanding.”[3]

Second, while we can retain some agnosticism about the exact nature of hell, we must be clear about the reality of hell. Jesus did not teach so extensively on the subject for nothing. Sinners must be told that there is a judgment coming and that eternal punishment will not be pleasant or tolerable in the least. While we ought not to abuse the doctrine by trying to scare sinners into repentance, we must hold fast to our responsibility to warn them. The Gospel is good news for those who believe, but there is also an element of warning that needs to be told. We must remember that the Gospel will always be an offense to sinful human sensibilities, but that does not mean that it ought not to be proclaimed.

Hi Matt: Thanks for your ideas. I might add a thought.

As we pass from youth to mid-life, and then to full age, our experience with this world, scripture, and our great God adds to our understanding. Do not fight too hard for "truth" when you are young. Keep your ears and your heart open, and Christ will lead you into all truth. When you are old, and have walked the path of Christ for many years, you will understand. You will be wise.

I thought your articles were well balanced, and showed gentleness and maturity.