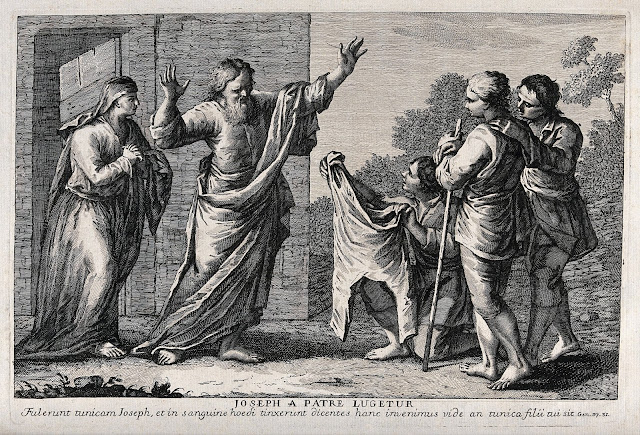 Genesis 37-48 brings us to one of the broadest continuous story arcs in the Old Testament: the tale of Joseph, son of Jacob. The story is well known by many, who have heard it from both Sunday School lessons and popular culture (it was even turned into a wildly successful stage musical): Joseph is a favored son out of Jacob's twelve, having been born to Jacob's favorite wife Rachel. As a token of his affection he lavishes attention and gifts on Joseph, including a beautiful "coat of many colors." The other brothers are jealous of this attention (as well as resentful of Joseph's naive boasting), and they sell him into slavery while framing their act as a tragic accident in which Joseph was killed. Joseph, having been sold into exile in Egypt, begins his life there as a slave before rising to a position of prominence; then he is charged with a crime he didn't commit and is sent to prison, after which he rises to extraordinary prominence once again, this time reigning as Pharaoh's right-hand man. The story ends when the other brothers come to Egypt to buy grain, and after Joseph pranks them a couple times (because they don't yet recognize him), he reveals himself, the family is reconciled, and Jacob's clan relocates to Egypt where they can be safe from the famine. It's a fabulous story in its own right. But the early church long ago noticed that it has an added depth for Christians, because Joseph's tale of misadventure and triumph appears to anticipate and illustrate, in a cyclical fashion, the passion of our Lord Jesus Christ.

Consider this: in at least three different instances, Joseph's story moves from betrayal and unjust punishment to exaltation. The first such episode is when Joseph's brothers plot to get rid of him. They do this by betraying and selling him for a price (as Judas did to Jesus), by tearing and bloodying his clothes (as happened to Jesus' at the crucifixion), and then by casting him down into a pit and raising him up again (as happened to Jesus in his burial and resurrection).

This leads to the second cycle that mirrors Jesus' death and resurrection. Having been betrayed and sold, Joseph tastes the bitter reality of slavery in exile (just as Christ tasted the bitter reality of the slavery and exile of sin on the cross). Just as Joseph must begin this stage of his life as a servant, so Christ "made himself nothing by taking the very nature of a servant" when he came for our salvation (Phil. 2:7). Nonetheless, within that household God exalted Joseph to the right hand of the master, just as God "raised Jesus...and exalted him to the right hand of God" (Acts 2:33).

This dramatic story takes place yet one more time in the life of Joseph. Once again he is betrayed (this time by Potiphar's wife), and he is sentenced as a criminal for a crime of which he is not guilty (just as Jesus was also unjustly sentenced to punishment as a criminal). Joseph was sent down to the prison for three years or so (see Gen. 39:20-40:1, 41:1), paralleling Christ's three days in the tomb. Then, miraculously, Joseph was raised out of the prison and ascended to a position at the right hand of Pharaoh, from whence he dispensed justice and order over the whole nation. Remarkably, of course, this is exactly what happened to Jesus: raised out of the tomb and exalted "to the right hand of God the Father Almighty, from whence he shall come to judge the quick and the dead."

These three parallel cycles of the life of Joseph all mirror the cycle of Jesus' passion. Joseph himself, then, and the entirety of his story, is a type, a foreshadowing of Jesus. As if to drive home the point, Genesis gives us some summary-statements about the life of Joseph that ought to send echoes of Jesus ringing through our minds. When his father Jacob finally sees Joseph alive again, after thinking him dead and gone, "his spirit revived" (Gen. 45:27), just as our spirits revive when we come to see the glorious truth of the risen Christ; later Jacob says, "Now I am ready to die, since I have seen for myself that you are alive" (Gen. 46:30)--a sentiment that can be heartily echoed by every Christian in reference to Christ. But the clearest such Christocentric summary of Joseph's story comes in Genesis 50:20, when Joseph tells his brothers, "You intended to harm me, but God intended it for good to accomplish what is now being done, the saving of many lives." This statement could just as easily have been said by the risen Christ, looking back at the pain of the cross, and every single word would still apply. What men meant for evil, God used for good, and the result is that many are saved.
Posted by Matthew Burden at 5:00 AM