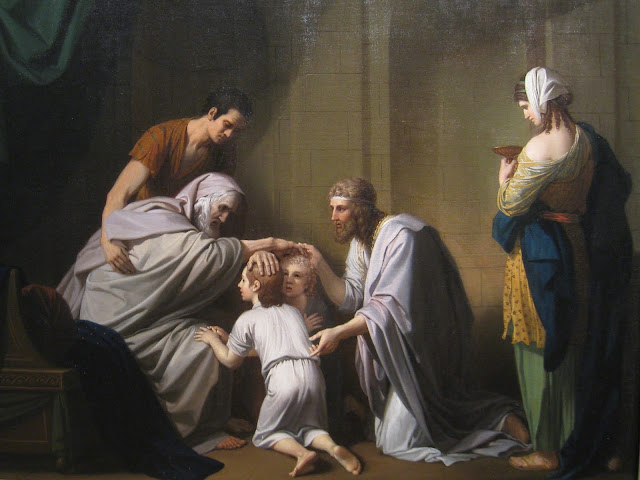 The closing drama of the book of Genesis is the story of Jacob's blessing: in chapters 48-49, he offers prayers and prophecies over two of his grandsons and each of his twelve sons. These passages bring the long tale of Jacob's family to its denouement, a fitting end to a long and dramatic tale. Two of the episodes in these chapters are of particular interest to the Christian reader looking for foreshadowings of Jesus: the manner in which Jacob blesses Ephraim and Manasseh, his grandsons, and the prophecy he pronounces over his son Judah.

In the first instance, which concerns us in this week's post, the story takes an interesting turn. The aged Jacob, presented with Joseph's sons Manasseh and Ephraim for the first time, gives them a prayer of blessing before the end of his life. But instead of doing what is customary--placing his right hand on the older boy's head and his left on the younger's--Jacob crosses his arms and intentionally places his right hand on Ephraim's head, the younger. Joseph tries to correct his father and make him put his right hand on Manasseh's head. But Jacob resists, explaining that Ephraim receives the right-hand blessing because he will be greater than his brother and will become "a group of nations." This is an interesting prophecy, partly because it does not appear to have come true--not in a literal sense, anyway. Ephraim and Manasseh both go on to become members of the northern tribes of Israel; and while Ephraim certainly becomes very populous and prominent in the northern kingdom, both it and Manasseh end up suffering the same fate when Assyria conquers, deports, and assimilates them in the 8th century BC. Both number among the "lost tribes of Israel," and one simply could not make a historical argument that Ephraim becomes "a group of nations" while Manasseh does not, for the simple reason that both share exactly the same fate, and drop off the radar of traceable history.

So what could be meant by Jacob's prophecy over Ephraim? Was he just reliving his own experience as the younger son who took the blessing intended for the firstborn? That may be part of it. But Christian tradition has always seen a very clear reason behind Jacob's act, though he himself could not have foreseen its fulfillment. In these two boys, as in the case of Jacob and Esau, the two sons represent the two covenants of God's people: the Old Covenant and the New. In fact, this story is repeated at least four times in the book of Genesis: Abel is favored over Cain, Isaac over Ishmael, Jacob over Esau, and Ephraim over Manasseh; another possible repetition is in Jacob's favoring of the younger wife, Rachel, over the older, Leah. The insistence and clarity of this repetitive pattern should point to the fact that there is some very important message at play here. If indeed this perpetual trope is a symbol of the coming of the New Covenant, then the pattern makes perfect sense (at least in the Christian interpretation). The younger son is favored over the older because the New Covenant fulfills and supersedes the Old; it represents God's full and final plan for humanity. This idea is foreshadowed over and over and over again throughout the book of Genesis. And the prophecy becomes true in a clear and startling sense: if Ephraim symbolically represents the New Covenant, then he does quite literally become "a group of nations"--the global, trans-national family of the church of Jesus Christ.

Before leaving this passage, we should also mark the fact that Jacob's prayer of blessing explicitly notes a pattern that we have seen throughout this book: that the mysterious character of "the Angel of the Lord" is in fact, in some way, God himself. In Gen. 48:15-16, Jacob directly identifies the Angel with the God of his fathers. This oddly plural identity for a monotheistic God is not odd if one is reading it in a Christian light: we have seen, over and over again in Genesis, how the Christian doctrine of the Trinity is made manifest, and how the presence of Christ in the story of his Word has been apparent from the very beginning.
Email ThisBlogThis!Share to TwitterShare to FacebookShare to Pinterest
Labels: Biblical Interpretation
Newer Post Older Post Home