What's the Deal with Hell? (Part 3 of 4): The Traditionalist Position

Note: This piece is the third part of a theology paper discussing various views of the nature of hell in the orthodox and evangelical Christian traditions. This article provides an overview of the traditionalist position, together with variations on that position. The previous two weeks' pieces focused on the views of universalists and annihilationists. The final week will offer some general conclusions on the evangelical theology of hell. After that, the ongoing series on foreshadowings of Christ in the Old Testament will resume. 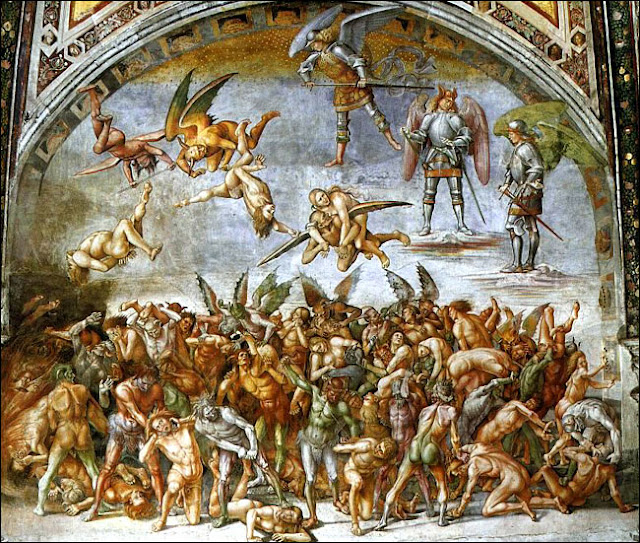 At this point the structure of this paper will shift slightly, and under this heading we will consider the traditionalist position first, and then three variations which allow for eternal, conscious punishment while still attempting to mitigate the harshness of the message.

Traditionalism: Given the exhaustive reference to the traditionalist position in the sections above, we need not rehearse again the full argument for this system of thought. The traditional scheme breaks down into a few basic elements: (1) the torments of hell stand in response to the crime of human sin; (2) this punishment is eternal; (3) it is conscious and terrible; and (4) it allows no possibility of future repentance.

The traditionalist interpretation grounds itself in a straightforward reading of Scripture (however, it should be acknowledged that what is commonly accepted as the "straightforward" reading of Scripture is itself a perception that has been partly shaped by the prominence of the traditionalist position). It acknowledges that while the NT does at times use the terminology of “all men” being saved and of the “destruction” of the wicked, these data must be interpreted in light of the more explicit passages (such as Jesus' frequent and graphic teachings on hell). And in those passages, the meaning appears to be clear: the fate of unbelievers is the punishment of everlasting torment. There is a clear division of the righteous and the unrighteous as well as an apparent eternality in regard to the wicked’s fate.

The Case Against Traditionalism: In addition to the arguments of universalism and annihilationism (see the blog articles from the past two Thursday posts), one further critique can be made. The traditionalist perspective relies almost wholly on a narrow view of salvation as a legal process, of sin as crime, and of hell as punishment. These elements are certainly prominent in biblical doctrine, but they are not the sum of Scripture’s teaching on the matter. In both the Bible and the history of theology, sin has alternatively been conceived of as a disease (Is. 53:4; Rom. 5:12) and as a captor/slavemaster (often coupled with the power of Satan—see Heb. 2:14-15; Col. 1:13, 2:15; 1 John 3:8). A legal perspective on sin accords well with the traditionalist perspective on hell, because in that light the sinner is clearly a criminal. From the other viewpoints, however, the picture is less clear, because there the sinner is represented as a victim (either as a sick person or a captive). Because the legal metaphor is so prominent in biblical soteriology, this critique cannot stand alone as a rebuttal of the traditional perspective, but it does point us toward the necessity of rethinking and broadening the traditionalist doctrine.

Hell as Exclusion from the Presence of God: One of the variants of the traditionalist view is that while hell may indeed be eternal conscious punishment, the references to physical pain implied in the images of fire and undying worm are merely metaphorical. So instead of unending physical torture, hell should be understood primarily as exclusion from the presence of God, which would presumably still leave room for great emotional and psychological anguish.

Such a view is not without historical precedent. It seems to have been the primary understanding of hell by the great reformers of the 16th century. Luther clearly outlined his own view of hell in terms of exclusion from God’s presence: “Hell is not hell because punishment is there, but because praise of God is not there.” He describes its tortures in terms of mental torments like “fear, terror, horror, the desire to flee, and despair.” John Calvin interpreted references to unending fire as “figurative expressions” intended to portray sinners’ severance “from all fellowship with God.” [1]

The idea of hell as banishment from God’s presence is particularly strong in the teachings of Jesus. Hell is a place outside of the Kingdom of God, a place of “weeping and gnashing of teeth” (see Matt. 8:12; 13:42, 50; 25:10-12, 30). Paul clearly couples the idea of banishment with destruction when he writes, "They will be punished with everlasting destruction and shut out from the presence of the Lord and from the majesty of his power" (2 Thess. 1:9). There is a strong thread of biblical evidence which interprets the sufferings of hell as deprivation—hell represents the loss of the greatest good of all, God, and thus it becomes the greatest tragedy of human experience.[2]

Two things should be noted with regard to this variant of the traditionalist position. First, although it is probable that the biblical language of fire and the undying worm ought to be interpreted metaphorically, there is no clear biblical evidence that would rule out the presence of physical torment in hell. Thus, while the view of hell as banishment is a possible alternative to hell as physical torture, it is not a conclusive argument against the physical element. Second, although the common assumption is that banishment makes for a pleasanter hell than physical torture does, that may not be the case. If we conceive of hell as exclusion from the presence of God, then we must recognize that God is the sustainer of all life and that all good things proceed from him. In the absence of that presence, hell would be an unimaginable horror even if physical torment were not involved.

Gradations of Punishment: A second major variant of the traditionalist view of hell, while acknowledging hell as eternal conscious punishment, allows for differing gradations of punishment. So, for instance, if both Adolf Hitler and Mahatma Gandhi were consigned to hell, Hitler would be sent to a more painful sort of hell than Gandhi. The impetus behind this position is largely philosophical: it accords better with our understanding of justice than does the traditional view (which generally holds the same awful punishment for everyone, regardless of the magnitude of their sins).

There is also a fair biblical argument to be made for this position. Jesus seems to imply that there will be different gradations of punishment when he proclaims woe over Chorazin and Bethsaida: “I tell you that it will be more tolerable on the Day of Judgment for the land of Sodom than for you” (Matt. 11:24). Paul also hints at this possibility in Romans 2 when he declares that “God will give to each person according to what he has done.” This view is also supported by the fact that it parallels a widely-held view of heaven, in which differing gradations of rewards are given to the saints.[3]

The underlying premise is that those who are not under grace will be judged according to their works. And since one person’s works quite obviously differ from another’s in quality and morality, it is a logical assumption that a judgment based on those works would also display some differentiation. One major weakness of this position, however, is that it is absent from the passages which teach most explicitly about the nature of hell.

An “Open” Hell: This final view of hell is considered here as something of an appendix to the preceding discussions. This model may allow the possibility of eternal conscious punishment for some people, but it also works just as well in universalist systems. In short, a belief in an open hell is the suggestion that, whatever the nature of hell, human beings still have their free choice and can therefore choose to repent. C. S. Lewis’ The Great Divorce presents a picture of just such a hell, where the damned can opt to leave and go explore heaven if they so desire. The problems with this position have already been enumerated in response to universalism: namely, there is no indication in the Bible of a second chance after death, and if hell precludes the active presence of the Holy Spirit, it would presumably be impossible for sinners to come to repentance.