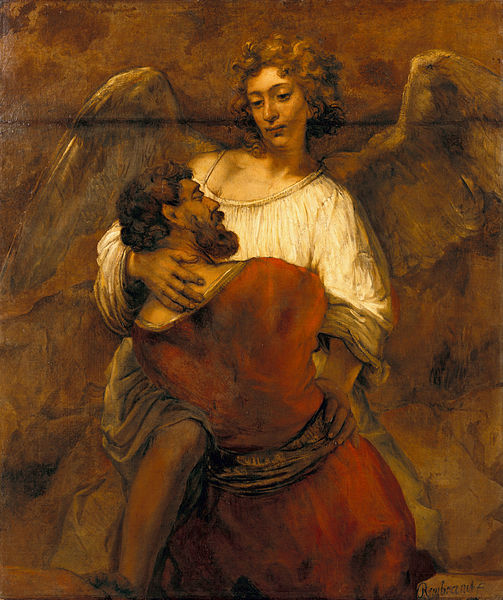 
In Genesis 32, we come across yet another exceptionally odd story. In the middle of Jacob's fearful return to his homeland, we find the strange interjection of an episode that defies any normal expectations for such a narrative. Jacob was waiting on the banks of the river Jabbok, having just sent all of his family and possessions over onto the other side. It was nighttime, and he was terrified of what might happen in the coming hours--he was anticipating a reunion with his estranged brother Esau, whom he hadn't seen since stealing his birthright many years before, and at that time Esau had responded with such murderous threats that it forced Jacob to flee into exile.

But as he waits, someone meets him on the banks of the river. Only, it isn't Esau. Stranger still, we're not sure who it is at first. All that we're told is that while Jacob was alone, "a man wrestled with him till daybreak." Weird, right? It's a plot twist that comes unexpectedly and which, at least at first, makes little to no sense at all. We're filled with lots of questions that the Bible doesn't seem interested in answering, like "What on earth is going on here?!" Even in ancient Near Eastern cultures, having a night-long wrestling match with a total stranger that you met alone in the wilderness wasn't really a thing that people did. So what's this all about?

There are a few clues about this man that drive home the point that something very out-of-the-ordinary is taking place. First, although the man is strong enough to wrestle Jacob all night long, the story tells us that he recognizes that he cannot overpower Jacob. Nonetheless, he does have an otherworldly power to throw Jacob's hip out of socket with just a simple touch. But even a bad hip couldn't slow Jacob down: he apparently held on long enough that the man had to ask to be released, and the reason he gives is that "it is daybreak." What sort of sense can we read into that? Is this man on a strict schedule of only wrestling in the darkness, but never in daylight? Does he have an important meeting to get to at dawn, and needs to wrap things up with Jacob? Or is he a vampire, who cannot survive the touch of the sun's rays?

At this point the story indicates that Jacob knows there's something special about his opponent, because he refuses to let the man go unless the man blesses him first. This is a request only asked of someone greater than oneself, or someone with some form of recognizable spiritual authority (as in the case of Abraham and Melchizedek, cited in an earlier study in this series). The man consents and blesses Jacob, but only after a peculiar interchange in which he requests Jacob's name, then changes it to Israel (which apparently means "he struggles with God"), and then cryptically avoids telling Jacob his own name in return. (The renaming of Jacob as "Israel" will be repeated in Gen. 35, in a scene in which God once again seems to appear physically and then to ascend from Jacob's presence; yet another story whose startling physicality in regard to God prepares us for the even more startling reality of the Incarnation.)

By this point in the story, though, the inference is becoming clear: Jacob has just spent all night struggling with this guy, and then is given a name meaning "he struggles with God." As in all the other weird stories of strange supernatural figures popping up in Genesis, we see again the pattern of a character who started out as "a man" ultimately being revealed as God himself. This is confirmed at the end of the story, where Jacob gives exactly this reading to the man's identity: "I saw God face to face, and yet my life was spared."

So the man is God. Okay, we've gotten that far. But what's with all the strange little details we noticed along the way?  First of all, the common repetition of this particular narrative sequence (a man shows up and is later revealed to be, in some sense, God himself) mirrors the actual historical revelation of God in Jesus Christ. He is fully man and fully God, and the people that he met during his Gospel ministry encountered him first as simply "a man" before gradually becoming aware of his divinity, which was clearly revealed at the end by his resurrection and ascension.

Although the wrestler in this story has access to divine powers, he nonetheless cannot prevail against Jacob--this is perhaps a hint toward the doctrine of Christ's kenosis: his "emptying" of the prerogatives of divine power in order to assume a nature like ours.

His odd request that Jacob release him before daybreak calls to mind a similarly odd command that Jesus gives to Mary Magdalene at dawn on resurrection Sunday: "Do not hold onto me, for I have not yet ascended to the Father" (Jn. 20:17). Perhaps in Jacob's story, as in the resurrection narrative, there is a hint of "there's still more to come." The wrestler was telling Jacob that this life of struggling with God through the darkness--a pattern that would characterize the entire experience of Old Testament Israel--was not the whole story. There was something else coming: daybreak, when the wrestling would cease and the blessing would be given. That hinted promise is fulfilled in the coming of Christ himself.

A final piece of evidence comes from Jacob's act of naming the place of that occurrence. He calls it "Face-of-God" (Peniel), or, in the ancient Greek translation of the Old Testament, "Form of God." This is the same kind of terminology that the New Testament uses to describe Christ. He is the image of God, the form, the visible representation of the unknowable God. Jacob's closing declaration about his night of wrestling also carries echoes of the Christian Gospel. It's usually rendered as "I saw God face to face, and my life was spared," but in the ancient Greek version, an equally strong rendering would be: "I saw God face to face, and my soul was saved." That, in a single line, is the Gospel message of Jesus Christ.