We Need More Agnostics in Church


There’s an old story told about the great 19th-century preacher Charles Spurgeon. One day he happened to meet a fellow who proclaimed himself an avowed agnostic. Spurgeon knew that “agnostic” is Greek for “not knowing.” So he observed, “Yes. That is a Greek word, is it not? The Latin word, I think, is ignoramus.”  The joke, of course, is that while Spurgeon’s translation from Greek to Latin is accurate enough, most agnostics do not actually intend to be calling themselves ignoramuses. Whether they are or not is a topic I will not touch on today; it must be taken on a case-by-case basis.

In point of fact, though, with all due deference to Spurgeon’s witty dismissiveness, I'm going to suggest that it might not be a bad idea for us Christians to appropriate the word “agnostic” and start applying it to ourselves (at least in certain seasons of life, or in staking out positions on minor doctrinal issues). Up till now, we’ve tended to use the word to portray a final stepping-stone in a long descent toward atheism, as portrayed in this 1922 cartoon: 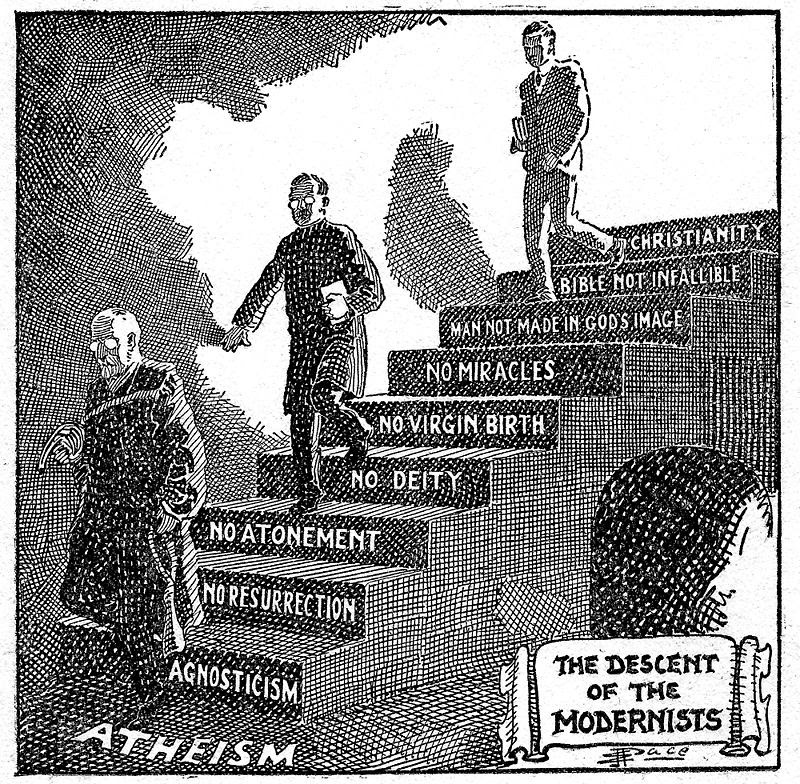 ("The Descent of the Modernists," by E. J. Pace, from Christian Cartoons, 1922; image is in the public domain)


But I don’t think we should abandon our rights to “not knowing” solely to the atheists and their ilk. Rather than using “agnostic” to refer to a sort of vanilla atheist, who is too noncommittal to follow the force of his own suppositions, I think it’s a fitting word to describe what our theological humility ought to look like. In the evangelical tradition, we often give too little room for doubt, for admissions of “not knowing,” and force people to imagine their beliefs in terms of either “blessed assurance” or “lack of faith.” In even its mildest form, this unspoken prohibition on doubt can send thoughtful, science-literate Christians into an identity crisis. There are times when a Christian is demonstrating an act of great personal courage in holding out his dearest beliefs to the harsh light of possible repudiation; but to most of his fellow Christians, this act of courage will be interpreted as a failing, a weakness, or a rebellion. In most cases, it will be treated as a problem to be fixed rather than an expression of humility and intellectual honesty. This means that rather than walking with our brightest thinkers on the long road of courage and discipleship, we ostracize them and, in many cases, lose them because of our own inhospitableness to doubt. And that’s just the milder form of our prohibition on doubt. In its worst forms, it can be used to bludgeon helpless Christians into assenting to all of the fantastical, disputable, minor doctrines that their particular pastor or denomination espouses. In contrast to this, allowing space for “agnostic Christians” seems rather more like what Jesus did with his disciples: to invite people to follow him before they even knew who he was, to “come and see” (John 1:39, 46)  and explore together the journey of true doctrine.

Because of the particular road of intellectual exploration and mystical experience that I’ve walked, I feel secure in my faith in the core doctrines of Christianity (those areas addressed by the classic creeds). But there are many areas of peripheral doctrines, areas in which there are multiple possible interpretations of the biblical evidence (like eschatology, the relation of God’s sovereignty to human free will, the eternal destiny of all people, and the early history of our planet) in which I would gladly call myself agnostic. I may have particular interpretations that I lean toward, based on external evidence and the internal logic of the theological arguments; but I don’t feel the need to say that I know for certain the correct answer. And, despite the pressure in my profession to have clear and firm answers for any theological question that might get lobbed my way, I’ve come to find that being comfortable with being “agnostic,” at least in some small areas, has been for me a surprising step forward on the unending upward road towards true humility.

Sometimes we need to remind ourselves, not only in Christian doctrine but in all areas of life, that it’s okay to say “I don’t know.” Even in this age of blogging and Facebook, where there are endless forums for everyone to declare their opinions on every subject, we need to remember that it’s okay not to have an opinion on everything. It’s okay to remain open to learning further perspectives.

But please understand that this freedom to say "I don't know" is not an excuse for intellectual laziness. Quite the opposite: it is a means by which we can journey out onto the road of God's truth and keep on pressing forward instead of getting stuck in just one tiny turn along the way. The holy mystery of the Scriptures, in all their dazzling complexity, and the broad and beautiful scope of Christian theology, with its countless variations on the single grand theme of Christ, says to me that sometimes the wisest course is simply to keep diving in, to keep pursuing the truth and submersing yourself in the dialogue of fellowship with brothers and sisters in Christ from other times and other cultures, rather than merely planting your flag on a single interpretation and seeing all dissent as a battle to be fought. The truth of God on all these questions is out there (I'm not advocating a relativistic stance in any way). But on looking at the history of the Christian tradition, it seems to me that the way to get there is not by proclaiming triumphalist certainties in our own interpretations, but by taking the long road of thinking together graciously, of sharing fellowship among people of differing theological perspectives, and of allowing room for questions, for doubt, and for openness to new insights.

Over the next few weeks in my Friday posts, I’ll offer a few critiques of some of the atheist/agnostic arguments against Christianity that are commonly heard in online forums and blogs. But it seemed fitting to begin, as Christ exhorts us, not by looking at the speck in our brother’s eye, but at the log in our own.
Email ThisBlogThis!Share to TwitterShare to FacebookShare to Pinterest
Labels: Apologetics, Church Life, Theology
Newer Post Older Post Home