The Time I Was an Illegal Immigrant 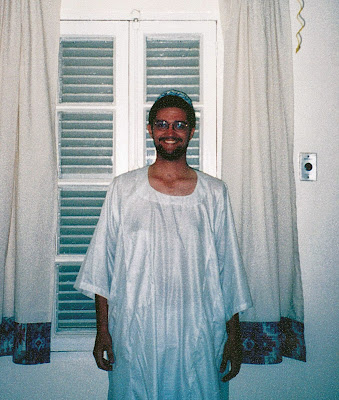 More than ten years ago, with the prayers and assistance of a great many friends and family, I was ready to set out on one of the great early adventures of my life. Because I was taking a summer semester in Tanzania, I had the spring months free, and I had decided to sign on with an international service agency and spend those months doing linguistics work in Sudan. That country had a special place in my heart; I had adopted it as a "prayer project" and had faithfully prayed for it for four straight years. So with great anticipation, I sent my passport off to the Sudanese embassy for a visa, well in advance of the recommended timetable.

But as it turns out, the folks at the Sudanese embassy run their bureaucracy rather as they do in Sudan itself—without much care for timetables. My application sat there at their embassy, apparently untouched, for nearly double the time usually taken to process a visa. I was sitting at home, waiting. Because of the delay, my departure date had already been pushed back and my plane tickets rescheduled. My fellow classmates were all back at school, plugging away at the spring semester, while I was whiling my time away in snow-locked northern Maine. Week after week went by, and already I had lost a quarter of my planned service time.

Eventually, my team leader in Sudan decided to set up a different way for me to get a visa. He had me recall my passport from the embassy and book my plane tickets for early February. On his end, he would push through all the paperwork on my behalf, pay all the necessary fees to have a visa processed, and have it ready to be stamped into my passport on my arrival at the Khartoum airport. So, in an act of faith, I strapped on $2000 worth of cash (as I had been advised to do because of bank conditions there), packed my suitcases, and went on my way.

After long layovers in London and Nairobi, I was finally about to check in for the last leg of the journey. It would turn out to be one of the most unsettling flights of my life. At the Nairobi counter, the British Airways clerk noticed that I didn’t have a visa for Sudan, and she warned me rather sternly: “We don’t have to let you on this flight. As soon as you set foot in Sudan, you’ll be an illegal immigrant, and they’ll have authority to do anything they want to you. Do you still want to go?” I said yes, explaining that my team's Sudanese travel agent would have the visa waiting for me at the airport. So, with evident trepidation, they let me on the plane. The flight made a stop first in Asmara (Eritrea), and all the other Westerners disembarked. The ride to Khartoum was a lonely one.

It was just about midnight when we touched down in Khartoum. The handful of us from the plane walked into the terminal over a dusty tarmac, and the rest of them immediately got into line at the customs check. It wasn’t a big airport—only about the size of the one I knew in northern Maine (and for a city of several million people!)—so it was apparent at the very first glance that the promised travel agent was not there. No one was waiting for me, papers in hand, and I had no phone with which to call my team leader.

So, my heart sinking, I stepped into line with the others, hoping desperately that the customs official would have been notified of my arrangements beforehand. When it was my turn, he looked at my passport and immediately said, “You have no visa.” I tried to explain my situation, and he motioned me into a little corner room off the terminal, where an official and two muscled, machine-gun-toting guards were idly watching an Arabic-dubbed version of the movie Titanic. The official looked at me and shook his head. “This is big problem,” he said. It turned out that that was about the sum of all the English he could muster, and I had no fluency in Arabic to speak of, but I had my team leader's cell phone number written down, and by gestures was able to convince the official to call it. I spoke to my leader for a brief minute, and then the official argued with him on the phone for another ten. A hasty arrangement was made: the team leader would call the travel agent and make sure he got there to the airport as fast as he could. (I was later told that the agent's excuse as to why he was not at the airport at the appointed time was that he was stuck in a traffic jam; but that was clearly an answer meant to save face--there are very few traffic jams in Khartoum at midnight.)

The customs official was satisfied to let me wait for now, and to keep watching his movie, so he made me sit down in a plastic chair in the main terminal, with one of the machine-gun-wielding soldiers standing beside me (in case I tried to make a break for it, I guess). Oddly enough, I didn’t feel at all worried. There was a deep sense of peace that had rested on me from the moment I was waved over into the official’s office; I can only attribute it to the many prayers that were said in my behalf from friends back home.

It was about half an hour later that a tall, big-bellied man with a broad smile sauntered into the airport, money and papers at the ready. He was gregarious and self-possessed, and the customs officials all seemed to know him and to be on quite friendly terms with him. We breezed through the applications, with my travel agent cracking jokes in Arabic the whole way through. He so changed the temperament of all the officials there that I wanted to break out into a shout of laughter: "I don't know where you've been all this time, but I'm sure glad I'm with you now!" (Incidentally, sometimes I feel like saying the same thing about God.)

Within just a few minutes, my passport was festooned with brightly-colored Arabic stickers, and I was waved through without even the compulsory check to see what was in my one piece of luggage—a carry-on suitcase that would hold the sum of my worldly possessions for the next six months, but which on that night was filled with (among other things) Arabic Christian literature.

This was one of my first introductions to getting by in Africa—have money ready, keep smiling, and, above all, know the people who can help you. So, with many prayers answered, I stepped out as a legal foreign worker into the hot, dry, midnight air of Khartoum. My team leader was outside the airport, waiting for me beside his car. He welcomed me warmly, but the tenor of his voice betrayed the fact that he had experienced more than a bit of worry while pacing around out there. For my part, I was just glad to be in Sudan. I was driven to the house I would be staying at and was shown to a bed, exhausted but safe. That night had been my first experience as an illegal immigrant, and my first experience of being the potential recipient of something from the barrel of a machine gun, but, all in all, I felt about as much at peace as I've ever felt.
Email ThisBlogThis!Share to TwitterShare to FacebookShare to Pinterest
Labels: Recollections
Newer Post Older Post Home