Atheists, and the Massacre of History


You can find the first two parts of this series on agnosticism/atheism here and here.

Observation #2 (How Atheists Fail at History): Some contemporary atheists—(and remember I’m mostly targeting the common rhetoric that gets thrown around in the worlds of blogging, punditry, and a few recent books, not all atheist commentators)—try to win their point about the awfulness of Christianity by highlighting some of the awful things we’ve done. They remind us about the terrors of the Crusades, about the horrors of the Inquisition and the witch-hunts of early Enlightenment, the bloody massacres that marked the European wars of religion, and the injustices perpetrated on native peoples worldwide in the name of Christian colonialism. Their arguments sound all the more convincing when they can point to current events and show a few outspoken Christians in the headlines, still performing acts of bigotry and idiocy in the name of Christ. But there are a few problems with their method, and I list these so that my humble readers will know enough to do better homework than these atheist commentators (and it isn’t hard to do better, though we too often fail on this mark). 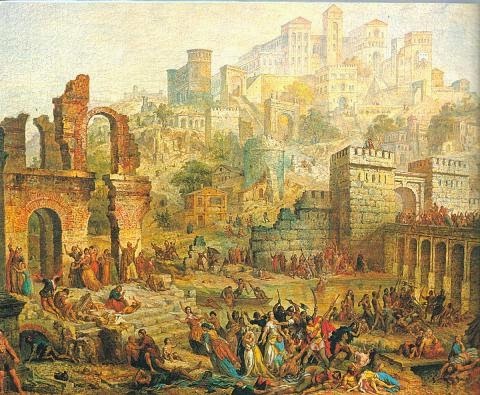 (Massacre of the Jews in Metz at the Outset of the First Crusade, by Auguste Migette (1802-1884), oil on canvas; image is in the public domain)

First, their argument rests on the assumption that these episodes are representative of Christian doctrine and practice—that such things must necessarily happen because of the sort of religion that Christianity is. Fortunately for us, good theology (and common sense) teaches us that such an argument is hogwash. Anyone who had made a basic study of the core doctrines of Christianity, and its core principles of morality—love the Lord your God, and love your neighbor as yourself—would see clearly that such events are outliers rather than the rule. They are tragedies that occur when Christians have gone against the actual rule of their morality. Thus, the argument that Christianity itself is to blame simply isn’t true—it is warped and sinful human nature that’s to blame. Such things happen not because Christianity is the way it is, but because people are the way they are.

Second (a related point), the atheists’ argument assumes that in each of these events, it is the perpetrator’s religion that is their driving motivation. In some cases, this might be true. But any good historian will tell you that arguing about historical “motivations” is a slippery thing, and probably the most dubious endeavor in all of historical study. Pretty much all human motivations are a mixed bag of impulses, and so there’s almost no historical act which can be said to have been motivated by religious sentiments alone (unmixed, say, with political agendas, racial issues, socio-economic issues, personal ambitions, etc.). Most reputable historians would tell you that the Crusades probably had as much to do with politics, socio-economic factors, and personal ambitions, as it did with religion. And even where religious motivations entered into the equation for the Crusaders, they were usually much more focused on issues of personal salvation than on any violent impulses inherent to Christian doctrine. Further, it is a historical mistake to judge all times and cultures in the scales of our own sense of morality. We simply cannot expect more of people than they were actually capable of doing, within the limitations of their own culture and time. The same is true for us—no doubt we too have glaring cultural blindspots that will drive future generations to question our sanity and goodness, but they are issues that we are not really able to correct for the simple reason that we are blind to them. All that to say, an attempt to lay any particular historical tragedy at the feet of Christianity, considered in the abstract, rather than at the feet of those particular perpetrators, is usually going to be fallacious. Historical arguments portraying Christianity or Islam or any other religion as solely responsible for a terrible act are usually serious oversimplifications of tremendously complicated historical, political, and social milieus. This is why I think it’s slightly unfair to say that “atheism” (considered in the abstract) is responsible for the many horrors of the atheistic regimes of Hitler, Stalin, Mao, and Pol Pot (even though that argument is in fact an exact parallel for the atheist argument about Christianity and its historical tragedies). 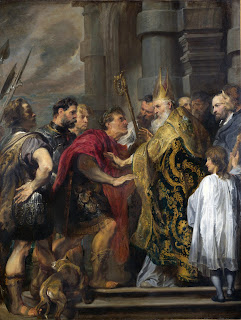 Third, this sort of atheist usually fails to paint an accurate historical portrait of Christianity’s legacy because they’re cherrypicking the events that can be portrayed negatively. And in the meantime, they miss the substantial historical case that says that Christianity has done just about the most good of any social movement in the history of mankind. I’ve never yet heard an atheist mention how Christianity is largely responsible for the revolutionary idea that all people, regardless of class, ought to be objects of the larger society’s care (an idea that Christian history has practiced imperfectly, but which came from no other source); how Christianity was the driving force in Western civilization behind the formation of public hospitals and schools and institutions to aid the poor; how Christianity, for all intents and purposes, invented the university as we know it today; how Christians preserved the whole corpus of classical learning that still remains to us (most of it painstakingly transcribed by eastern Christian monks for hundreds of years before passing it on to the Islamic caliphates and the Italian Renaissance); how even in the “Dark Ages,” Christian monks in western Europe made incredible advances in the practical sciences of forestry, agriculture, timekeeping, and a host of other advances that made Europe’s later dominance possible; how Christianity often chastised its own kings and rulers for their barbarities (for instance, the famous story of Ambrose refusing to admit Emperor Theodosius to communion after he perpetrated a massacre); how Christian missionaries brought literacy and medical care to isolated people groups all around the world (and continue to do so today); and how Christianity is still the greatest source of charitable social action in the world today. If we’re going to paint an accurate historical portrait of Christianity, these things must be in the conversation just as much as the tragedies are.

A good sense of the historical picture (and the mess that the “new atheists” make of it) can be found in the pages of David Bentley Hart’s book, Atheist Delusions, which is well worth the read. It should be said in closing, though, that we Christians often fall into the same exact injustices as the ones I’ve just described, whenever we make our polemics against atheism or other religions. We, too, blithely assume that Stalin’s long massacres are attributable simply to atheist beliefs alone, or that ISIS’ atrocities are the true manifestation of Islam. We, too, cherrypick the negative events from Islam’s history without doing our homework and studying the long and varied story of Muslim spirituality. If we want atheists to treat our historical journey as an object of real reflection rather than a straw-man punching bag, then we have to offer the same courtesy to those on the other side of the fence from us. That’s not just common sense and good manners, it also happens to be the Golden Rule.