Christ before the High Priest 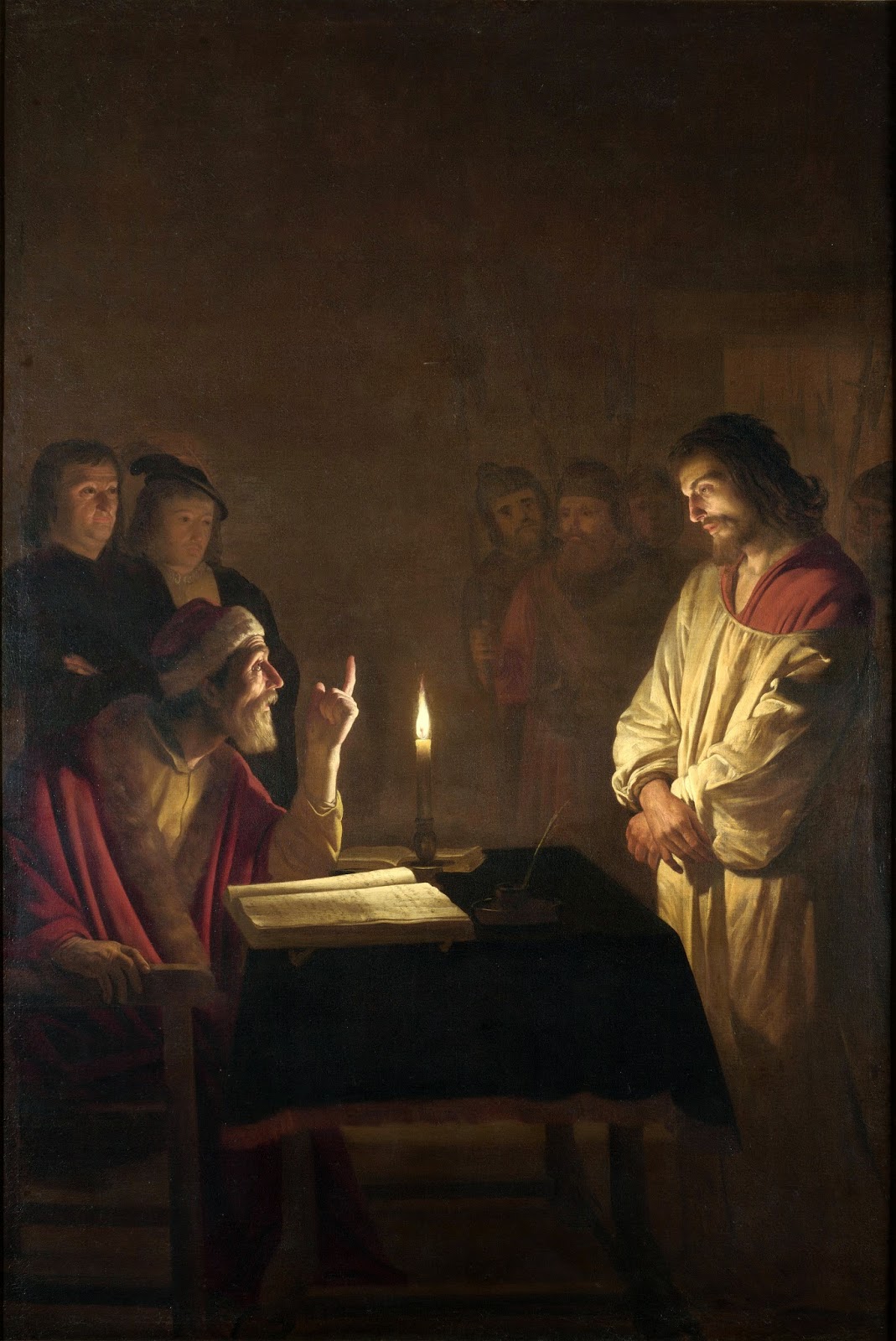 Way back when Rachel and I were college freshmen, we encountered this painting. We were part of the First-Year Honors Program at Houghton College, which took us over to London for our spring semester. There we studied history, philosophy, literature, and art, from ancient times to the present. Much of our workload had us going out to the many museums in London to see firsthand some of the great works of Western civilization. By the end of the semester, the National Gallery had come to feel like a home away from home. And even after seeing and studying thousands of paintings, there were a few that managed to stick in one's memory and imagination. For both me and Rachel, this was one such painting. (We now have a print of it hanging in our dining room.) The original work is of large proportions--nine feet tall by six feet wide--so it readily commands the attention, even in a crowded gallery.

Appreciating great paintings is a skill that's being lost in our present society, thanks to the over-saturation of our culture with images. But imagine that you lived before the Internet, before television, before photography, perhaps even before woodcut illustrations in printed texts. In that world, an image was an exceptionally rare thing. Rather than a mass-produced image file, one of millions you could look at, an image in those days would have been the singular creation of an artist's genius and hard work. As such, most images that were made had a high degree of intentionality and meaningfulness worked into them, in contrast to much of today's photographic imagery. To sit with a great painting is, in a way, much the same thing as to read a great work of literature--to open one's mind to conversation with a thoughtful perspective from another age, another culture, another way of looking at the human condition.

So, in order to assist my readers with an appreciation of the paintings I post here on the occasional Throwback Thursday, I'll give a few pointers as to objects of particular notice in each painting. I don't claim to be an art expert, so don't anyone take these sputtering thoughts to help write a paper on art criticism or anything; but I'd like to at least be able to share a bit of the sense of wonder and depth that I experience in the presence of a great painting. (And, naturally, this is a less-than-perfect medium--I would advise you to go visit a museum, where you can actually see the colors and the brushwork in front of you, rather than to read my blog about paintings.)

The first thing to know about this painting is that it was influenced by Caravaggio's style of tenebrism (a particular version of chiaroscuro). This means that the painting is characterized by large contrasts between light and dark, such that the contrast itself becomes one of the leading stylistic elements. For a painting like this, whose subject is Christ, the style is fitting: Jesus is "the light [which] shines in the darkness, but the darkness has not understood it" (John. 1:5). The irony of the image is that the high priest, who holds on his table the only source of visible light in the room, cannot understand that the Light of the World is standing before him. He also has the open book of the Law of Moses in front of him, unaware that the man across the table is both the One who inspired those ancient words (the quill pen leans toward Christ, hinting to him as the author), and who is himself their final fulfillment. A second book is also open on the table, but turned away from the high priest, as if he does not consult this one--perhaps a reference to the Old Testament prophets, who speak about the coming Servant of God. Also, notice the interplay between the postures and faces of the two men: the high priest, though seated and required to look up into the face of Christ, is proud and accusatory. Christ, though his posture and clothing reveal a submission to the events of his Passion, shows no submission to the message of this high priest--his eyes are locked on the priest's, silent but strong. Now look at the contrast between the two men's hands. The high priest holds up a single finger, lecturing Christ. This priest is certain that he has the truth, and is defensive against Christ's claim to be, in and of himself, "the Truth." Christ's hands are bound, but not really passive. They are elegant and strong, and composed together in a patient assurance of his own truthfulness, an assurance so strong that it has no need of making a defense against the high priest's attack. Finally, look at the other faces in the painting. There are a few shadowy figures behind Christ, representing the soldiers who arrested Jesus and brought him to this trial. But behind the high priest stand two men in Renaissance-era clothes, representing contemporaries of the artist. (It was common practice to work one's patrons, oneself, or other contemporary figures into historical paintings.) The interesting thing here, of course, is that the artist has placed these contemporaries on the side of the high priest, not of Christ, and their posture and expressions are just as proud and defensive as the high priest's. This is a reminder to us of our perpetual human inclination, when faced by the patient, gracious, but life-transforming person of Christ, to retreat into ourselves, into our own stubborn assurance that we've got it right and anyone who would challenge us must be wrong. (And Christians, like the high priest, can sometimes even use our own particular interpretation of the Bible as a weapon of this vain self-assurance, a defense against what Christ would do in our lives if we really let him.) This painting is a call to us to let all those vain pretensions slip away, and to actually do what none of those in the painting, because of their stubborn self-benightedness, are doing--to kneel down in the presence of the Light of the World, and to acknowledge him, and him alone, as the center of our lives.
Email ThisBlogThis!Share to TwitterShare to FacebookShare to Pinterest
Labels: Devotional Reflections, Paintings
Newer Post Older Post Home