Atheists and Other Accidents of Poor Theological Literacy

Having recently been amused and annoyed by a series of atheist blogs that seemed to have no actual understanding of Christianity, I thought it would be of service to give a measured response. My main thrust here is to offer a helpful critique of the things that many atheists/agnostics say, and to give my readers a few mental tools so as not to be cowed by the sheer bluster of atheists’ intellectualized bravado. And, though I’m going to be critical of them here, I should give full disclosure and say that I’m sympathetic to the atheist position. I find their adherence to an 18th-century sense of confidence in the power of pure reason quaintly charming; I admire and share their passion for the natural sciences; and I respect the personal courage it has taken for many of them to follow their quest for truth, here in a society that has not always welcomed their voices.

As you may have noticed, atheists and agnostics are becoming markedly more vocal in our society. To a certain extent, this is a good thing, and I applaud the fact that we live in a society in which people of different religious viewpoints are permitted to speak their ideas into the public forum. But the other side of that coin is that the people who do speak up sometimes don’t quite know what they’re talking about, or, even if they do, they often misunderstand their opponents’ position. And, to top it all off, it’s often done (especially in our Internet age) in a spirit of ridicule and arrogance rather than humility and respect. (Please note that this description of the public interchange of religious views is just as true of many Christians as it is of a few atheists/agnostics.) Now, it’s true that there are a few very thoughtful craftings of the atheist argument out there; I’ve read some of them and have enjoyed the intellectual challenge they present (for instance, Michael Martin’s Atheism: A Philosophical Justification). I’m not mainly addressing those works, though—I’m speaking more to the arguments one might find in online dialogue, from the mouths of pundit ideologues, and in the pages of some of the books of the “New Atheist” movement.

So, to help my Christian readers gain some traction against the occasional atheist tirade, and to help any atheist/agnostic readers not fall into a succession of obvious fallacies, I offer the following observations. (We'll do one observation this week, and a couple more on next Friday's post.) 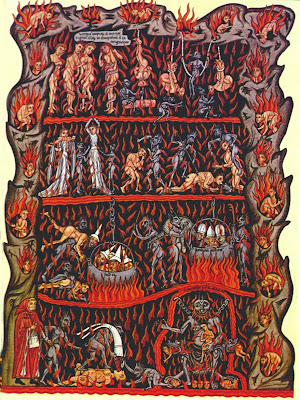 Observation #1 (How Atheists Fail at Theology): Atheists tend to be at their strongest when they argue from philosophy, not theology. The reason is this: when trying to argue against Christian theology, atheist ideologues usually appeal to the extreme edges of doctrine to make their points, and they often do this by picking on debatable theological positions. It's not uncommon to run across statements like this: "It's morally repugnant to believe in a God who would send people to eternal physical torture in literal hellfire just because they're not convinced by the evidence that Jesus is his Son." Statements like this reflect not only a shockingly simplistic understanding of the process of salvation (as some kind of intellectualized persuasion), but reduce the doctrine of hell--a much-debated field within Christian theology--to its most grimly offensive view, as if that's what all Christians have always believed. Further, even for those portions of the Christian tradition that do hold the particular view they’re attacking, the atheists’ argument usually shows no signs of having studied enough to truly understand the doctrine in any depth (in the case in hand, they will have made no study of the doctrines of sin, human responsibility, holiness, and justice). Even the most foundational doctrines—such as the nature of God—often seem to be too much of a waste of time for atheists to consider actually picking up a book of good theology to consult on the matter. Imagine their surprise to find that most Christians don’t conceive of God as an invisible sky-fairy! Or that some Christians do not actually conceive of the eternal destiny of non-Christians as being an everlasting course of actual physical torture in literal fire. Or that some hold to early-church interpretations of Genesis which allow much more room for theological readings, allegories, and an honest intersection with modern science. Instead, atheists cripple their own arguments by appealing only to the position on these issues that most repels them, while ignoring other possible interpretations within the rich and varied field of Christian theology, possibilities that many people would actually find reasonable and spiritually compelling. (Incidentally, if there are any Christian readers who would like a fresh take on some of the other plausible interpretations of the doctrines I just mentioned, then follow along with my Saturday series of posts on my theological "95 Theses"). I often read through atheist and agnostic blogs, hoping to find someone who has made an honest study of Christian theology, but have yet to be rewarded in my search. As a result, atheists end up eviscerating row after row of straw men instead of honestly addressing Christian doctrines.

Now, a criticism of my own evangelical tradition: although it’s true that atheists should read more theology before sounding off, it’s equally true that they hold the caricatures of Christianity that they do because we Christians have been poor communicators (and often, poor students) of the theological richness to which we are heirs. We’ve allowed them to hold ridiculous views of Christian doctrine because we’ve dumbed down the Gospel to the point of making it insipid, and it’s probably good for us to face a challenge which will force us to return to the depth and beauty of the broader Christian tradition.

But to sum up: a great critique, of religion or anything else, is not the one which generates the most sound bites, but the one which has clearly done the hard work of seeking to understand its opponents’ positions on their own terms. By that measure, most of modern atheism's critiques of Christianity fall short.

(Picture inset, above: a pictorial representation of hell from Hortus Deliciarum, by Herrad of Landsberg, c. 1180; image is in the public domain)