Heroes of the Faith: Thomas Cranmer and the English Reformation 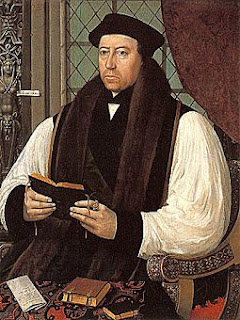 (Click here for an introduction and other installments of this series)
Lecture audio: Thomas Cranmer & the English Reformation
(click here to listen or right-click to download)
“All men will hate you because of me, but he who stands firm to the end will be saved.”   - Mark 13:13

“Everyone must submit himself to the governing authorities, for there is no authority except that which God has established. The authorities that exist have been established by God. Consequently, he who rebels against the authority is rebelling against what God has instituted.”  – Romans 13:1-2b
Thomas Cranmer: Basic Facts 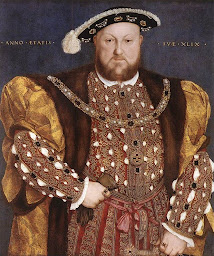 - Thomas Cranmer (pictured above, 1489-1556) was the Archbishop of Canterbury during one of the most pivotal periods of British history: the slow break-up between the English church and the Roman Catholic Church. Unlike other great Reformers like Calvin and Luther, Cranmer never had aspirations of being a leading figure in the Protestant movement, but he happened to be in the right place at the right time to help guide a very messy political and religious situation into a new direction.

- Cranmer’s legacy is a complex one, and he is often accused of being wishy-washy and capitulating too much to King Henry VIII (pictured at right). But he did show remarkable courage and moral fortitude on several occasions, including at his execution.

- Cranmer is best known today as the author and compiler of The Book of Common Prayer, which is still the fundamental staple of all worship services in Anglican and Episcopal churches worldwide.
Timeline of Cranmer's Life and the Course of the English Reformation:
1529 – For nearly a decade and a half, Cranmer has pursued a career as a priest and theologian at Cambridge University. There he meets the retinue of King Henry VIII, and suggests to the royal advisors that the King’s desire to be legally divorced from his wife, Catherine of Aragon, could be validated by sound theological arguments. King Henry selects Cranmer himself to research and write a treatise on the subject.

1530-32 – Cranmer is sent to Rome to argue the case for Henry’s annulment before the Pope, but to no avail. He then visits the courts of the Lutheran princes of Germany and there marries the niece of a Lutheran reformer (but their marriage would be kept secret for most of his life). Meanwhile, with his mistress Anne Boleyn pregnant, Henry VIII needs to go forward with the annulment of his marriage whether the Pope approves or not.

1533 – When the Archbishop of Canterbury passes away, Cranmer is surprisingly selected as his replacement. Although hesitant to accept the post, he eventually agrees, and then allows Henry’s marriage to be annulled.

1534 –38 – A quick series of royal decisions push England in a Protestant direction. The King is declared the “supreme head” of the English church (rather than the Pope), English Bibles are ordered to be put in every church, and the Roman Catholic monasteries are liquidated.

1539-43 – Henry does an about-face and, while not giving up his leadership of the Church of England, tries to preserve certain Catholic doctrines and practices, including priestly celibacy and transubstantiation of the Eucharist; he now forbids reading of the Bible except by experts. Henry also has Thomas Cromwell, his supreme church advisor, executed under dubious charges (despite Cranmer’s objections), and nearly allows Cranmer himself to be done away with.

1547 – Henry dies and his nine-year-old son Edward comes to the throne, under the guidance of the Duke of Somerset. Somerset and his successor push England back into a radically Protestant direction,

1549-1552 – Cranmer publishes his Book of Common Prayer; it is put to immediate use in the churches (and is still used today). He also composes his “Forty-Two Articles,” which will eventually become the basis for the foundational declaration of Anglican theology.

1553 – After young King Edward’s death, Cranmer supports Lady Jane Grey’s claim to the throne; but within a few months she is pushed out by Henry’s Catholic daughter Mary (known in Protestant history as ‘Bloody Mary’). Cranmer is immediately arrested after the regime change.

1554-1557 – During Mary’s reign, Catholicism is aggressively reinstated, and Protestant leaders are regularly executed. Among these martyrs are Cranmer’s friends Nicholas Ridley and Hugh Latimer; then in 1556 Cranmer’s own time comes. Under great duress, he signs a recantation of his Protestant views. But at his execution, he surprises everyone by recanting his recantation, deciding at the very end to stay faithful to the Protestant principles of which he had become convinced. While burning at the stake, he held out his hand in the flames to let it burn first, as if to atone for the writing of his false recantation.

1558 – Queen Mary dies and Elizabeth becomes queen. Through her decades-long reign, England once again swings back toward a Protestant direction, sometimes violently persecuting its Catholic citizens, before finally settling on a “middle road” between the two theological camps. 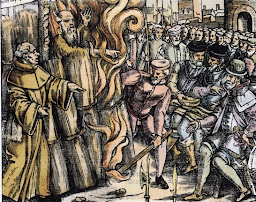 Quotes
[A Prayer:] “Almighty God, give us grace that we may cast away the works of darkness, and put upon us the armor of light, now in the time of this mortal life, in which thy Son Jesus Christ came to visit us in great humility, that in the last day, when he shall come again in his glorious majesty to judge both the quick and dead, we may rise to the life immortal, through him who liveth and reigneth with thee and the Holy Ghost, now and ever. Amen.”
[Hugh Latimer, to his friend at their execution:] “Be of good cheer, Master Ridley, and play the man; we shall this day light such a candle in England, as I hope, by God’s grace, shall never be put out.”
Email ThisBlogThis!Share to TwitterShare to FacebookShare to Pinterest
Labels: History, Theology
Newer Post Older Post Home