Heroes of the Faith: Ignatius of Loyola & Francis Xavier 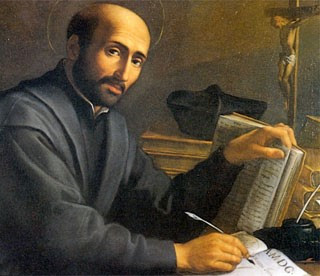 (Click here for an introduction and other installments of this series)
Lecture audio: Ignatius of Loyola & Francis Xavier
(click here to listen or right-click to download)
Samuel replied: “Does the Lord delight in burnt offerings or sacrifices as much as in obeying the voice of the Lord? To obey is better than sacrifice.”  – 1 Samuel 15:22a

Let us fix our eyes on Jesus, the author and perfecter of our faith, who for the joy set before him endured the cross.
– Hebrews 12:2a
Ignatius of Loyola: Basic Facts 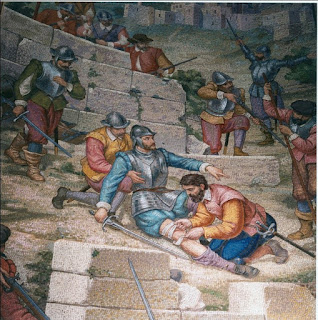 - Ignatius (1491-1556) was a soldier in Catholic Spain until a leg injury forced him into a long convalescence. He spent his time praying and reading devotional books, and committed himself to become a soldier for Christ. He gathered a group of friends around him and founded the Society of Jesus (the Jesuits), who were sworn to personal obedience to the pope.
- The Jesuits became the leading force of the Catholic Counter-Reformation, at the forefront of missions and education. They were also active in halting the spread of Protestantism in Europe.

- Ignatius’ most enduring work is his book, Spiritual Exercises, which became a classic of devotional literature.
Ignatius' Method of Making the Examen
First Point: Give thanks to God our Lord for benefits received.

Second Point: Ask grace to know your sins and cast them out.

Fourth Point: Ask pardon of God our Lord for the faults.

Fifth Point: Make a resolution to amend your future ways, along with the grace of God.
Quotes from Ignatius
“Few souls understand what God would accomplish in them if they were to abandon themselves unreservedly to Him and if they were to allow His grace to mold them accordingly.”

“God freely created us so that we might know, love, and serve him in this life and be happy with him forever. God's purpose in creating us is to draw forth from us a response of love and service here on earth, so that we may attain our goal of everlasting happiness with him in heaven. All the things in this world are gifts of God, created for us, to be the means by which we can come to know him better, love him more surely, and serve him more faithfully. As a result, we ought to appreciate and use these gifts of God insofar as they help us toward our goal of loving service and union with God. But insofar as any created things hinder our progress toward our goal, we ought to let them go.”

“O my God, teach me to be generous,
teach me to serve you as I should,
to give without counting the cost,
to fight without fear of being wounded,
to work without seeking rest,
to labor without expecting any reward,
but the knowledge that I am doing your most holy will.”

“Go forth and set the world on fire.”
Francis Xavier: Basic Facts 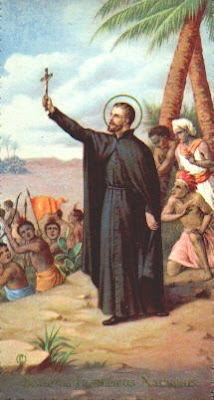 - Francis Xavier (1506-1552) was a Catholic born in the Kingdom of Navarre (current Spain/France border region) and was one of Ignatius’ initial circle of six friends—a founding member of the Jesuits.
- It was the age of exploration, and traders and colonists were sailing to the Americas, Africa, and east Asia. The kings of Spain and Portugal began sending out missionaries to these places, and Francis Xavier was among the first wave to volunteer for mission service. He brought to Gospel to India, Indonesia, and Japan. He died on the doorstep to China, yearning to bring the Gospel there too. He is believed to have baptized about 30,000 converts.

- He focused on teaching the basics of the faith to children and restoring a Christian lifestyle among European traders.
Quotes from Francis Xavier
“The best of news comes from Molucca: John Beira and his companions are constantly in peril and in danger of death, and the result is great progress in the Christian religion.”

On the importance of Christian education for young children: “Give me the children until they are seven and anyone may have them afterwards.”
Email ThisBlogThis!Share to TwitterShare to FacebookShare to Pinterest
Labels: History
Newer Post Older Post Home