Heroes of the Faith: John Calvin & the Swiss Reformation 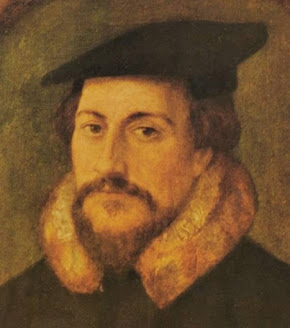 (Click here for an introduction and other installments of this series)
Lecture audio: John Calvin & the Swiss Reformation
(click here to listen or right-click to download)
“Depart, depart, go out from there! Touch no unclean thing! Come out from it and be pure, you who carry the vessels of the Lord.”  – Isaiah 52:11

“For [God] chose us in [Christ] before the creation of the world to be holy and blameless in his sight. In love he predestined us to be adopted as his sons through Jesus Christ, in accordance with his pleasure and will—to the praise of his glorious grace….In him we were also chosen, having been predestined according to the plan of him who works out everything in conformity with the purpose of his will.”  – Ephesians 1:4-6a, 11

“What then shall we say? Is God unjust? Not at all! For he says to Moses, ‘I will have mercy on whom I will have mercy, and I will have compassion on whom I will have compassion.’ It does not, therefore, depend on man’s desire or effort, but on God’s mercy….Therefore God has mercy on whom he wants to have mercy, and he hardens whom he wants to harden.”  – Romans 9:14-16, 18
Basic Facts: John Calvin, Ulrich Zwingli, and the Swiss Reformation:
- The Swiss Reformation refers mostly to the reforms begun by Ulrich Zwingli (1484-1531) in Zurich and John Calvin (1509-1564) in Geneva. Zwingli was a contemporary of Martin Luther, and Calvin was the leading light of the second wave of great reformers. The Swiss Reformation went even further than the Lutherans by adjusting the meaning of the Lord’s Supper, by getting rid of the arts in church, and by trying to go back even closer to New Testament Christianity (i.e., whatever was not explicitly allowed in Scripture was not allowed in church).
- The Christian tradition that comes from the Swiss Reformation (particularly the tradition shaped by Calvin) is known as the “Reformed” tradition, and it emphasizes the priority of Scripture and the sovereignty of God. Several current denominations, like the Presbyterians, Dutch Reformed, and Church of Scotland, are direct offshoots of the Reformed tradition; it also played a major role in the growth of the Baptists.

- Zwingli was a pastor by choice and profession; Calvin was first and foremost a scholar and writer who was pressed into service (almost against his will) as a pastor.
Major Aspects of the Swiss Reformation:
- Social concern: Both Zwingli and Calvin believed that the Kingdom of God should make an impact on how we live, and especially in politics; and they took great interest in reforming the practice of civil government as well as the church.

- Church practice: A new kind of worship service was introduced, stripped of liturgy and vestments and icons, and centered instead around the teaching of the Bible. The Lord’s Supper was now seen to be a symbol of Christ’s spiritual presence rather than the actual, physical presence of the body and blood of Jesus.

- Doctrine: Calvin’s teaching on predestination focused many of the debates in Christian theology onto the interaction between God’s sovereignty and human free will; these debates continue to this day.
Quotes: 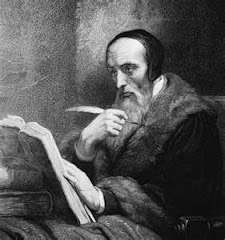 “True and solid wisdom consists almost entirely of two parts: the knowledge of God and of ourselves.”
“In the cross of Christ, as in a splendid theater, the incomparable goodness of God is set before the whole world. The glory of God shines, indeed, in all creatures, but never more brightly than in the cross, in which there was a wonderful change of things - the condemnation of all men was manifested, sin blotted out, salvation restored to men; in short, the whole world was renewed and all things restored to order.”

“Zeal without sound doctrine is like a sword in the hands of a lunatic.”

“There is not one blade of grass, there is no color in this world that is not intended to make us rejoice.”

“God preordained, for his own glory and the display of His attributes of mercy and justice, a part of the human race, without any merit of their own, to eternal salvation, and another part, in just punishment of their sin, to eternal damnation.”

“One of the most remarkable renewals brought by the Reformation was a shift in the whole idea of what it meant to be worthy and do good. The very purpose of life was redirected. Preoccupation with acquired virtue and earned status was displaced by confidence in friendship freely received and permanently guaranteed by God’s unearned love.” – Raymond K. Anderson
Email ThisBlogThis!Share to TwitterShare to FacebookShare to Pinterest
Labels: History, Theology
Newer Post Older Post Home