Heroes of the Faith: The Anabaptists 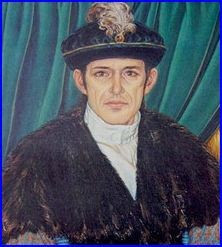 (Click here for an introduction and other installments of this series)
Lecture audio: The Anabaptists
(click here to listen or right-click to download)
“My command is this: Love each other as I have loved you.”  – Luke 15:12

“This is how we know that we love the children of God: by loving God and carrying out his commands. This is love for God: to obey his commands.”  – 1 John 5:2-3a

“You have heard that it was said, ‘Eye for eye, and tooth for tooth.’ But I tell you, Do not resist an evil person. If someone strikes you on the right cheek, turn to him the other also….You have heard that it was said, ‘Love your neighbor and hate your enemy.’ But I tell you: Love your enemies and pray for those who persecute you.”  – Matthew 5:38-39, 43-44
The Anabaptists: Basic Facts 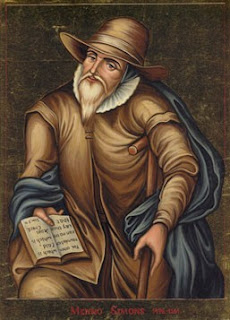 - Conrad Grebel (above), 1498-1526, began as part of Zwingli’s Swiss Reformation in Zurich, but a local Bible study convinced him to start baptizing adults (instead of infants).

- Menno Simons (right), 1496-1561, helped to unify the non-resistant Anabaptists after the catastrophe of the Munster rebellion.

- The Anabaptists are usually seen as the fourth major wing of the Reformation, after the Lutherans, the Reformed churches, and the English Reformation. The Anabaptists, however, found persecution almost everywhere they went and did not ally themselves with secular authority. They are known as “the Radical Reformation,” and were originally feared as anarchists. Their direct legacy carries on today in the Mennonites, Amish, Hutterite, and Brethren in Christ churches, and indirectly in the Baptists and Congregationalists.

- “Anabaptist” means “re-baptizer,” because their practice was to baptize people as adults, even if they had been previously baptized as infants.

- The Anabaptists decided to follow the Bible as closely as they could. This led them to challenge some of the fundamental assumptions of their culture—namely, they suggested that people ought to have the right to choose for themselves what they believed, and that true Christians ought not to be involved in matters of war or secular politics. These were dangerous ideas at the time, and they led to many early Anabaptists being persecuted and martyred.

- Anabaptists were also feared because their name became associated with several very radical sects. Foremost among these was a group led by Jan Matthys and Jan of Leiden, which took over the German city of Munster and turned it into a bizarre cult center for more than a year. Most Anabaptists, however, denounced these actions.

- They began in Switzerland, but persecution pushed them into Germany, Austria, and the Netherlands; then later into eastern Europe and Russia; then finally to the US and Canada.
Anabaptist Theology

Anabaptist doctrine highlighted a number of important themes:
- The importance of discipleship—while they acknowledged that salvation came by God’s grace alone, through faith, they put much more stress on the matter of obedience in the Christian life than some other reformers.

- Love is the highest obligation of the Christian, an obligation which is expressed in concrete ways (i.e., in actions, not just as an emotional sentiment)—one of the foremost ways this love is expressed is by a commitment to peace.

- Religious toleration—people ought not to be coerced or forced into their faith-commitments; they should be free to choose for themselves. For Christians, baptism is the symbol of this choice.

- Separation from the state—the church is a different society altogether, set under the love-oriented law of Christ. God has instituted secular government as a means of keeping order outside of the perfect order of Christ’s kingdom. Hence, Christians ought not to serve in the military or in political offices that would require the use of force, and they ought not to take oaths.
Quotes from Menno Simons
“The regenerated do not go to war, nor engage in strife. They are children of peace who have beat their swords into plowshares and their spears into pruning forks, and know no war....Christ is our fortress; patience our weapon of defense; the Word of God our sword. ...Iron and metal spears and swords we leave to those who, alas, regard human blood and swine’s blood of well-nigh equal value.”

“We who were formerly no people at all, and who knew of no peace, are now called to be a church of peace. True Christians do not know vengeance. They are the children of peace. Their hearts overflow with peace. Their mouths speak peace, and they walk in the way of peace.”

“True evangelical faith cannot lie dormant. It clothes the naked, it feeds the hungry, it comforts the sorrowful, it shelters the destitute, it serves those that harm it, it binds up that which is wounded, it has become all things to all people.”
Email ThisBlogThis!Share to TwitterShare to FacebookShare to Pinterest
Labels: History, Theology
Newer Post Older Post Home