Glimpses of Grace: The Sacrifice of the Beloved Son (Part 1 - A Theodicy) 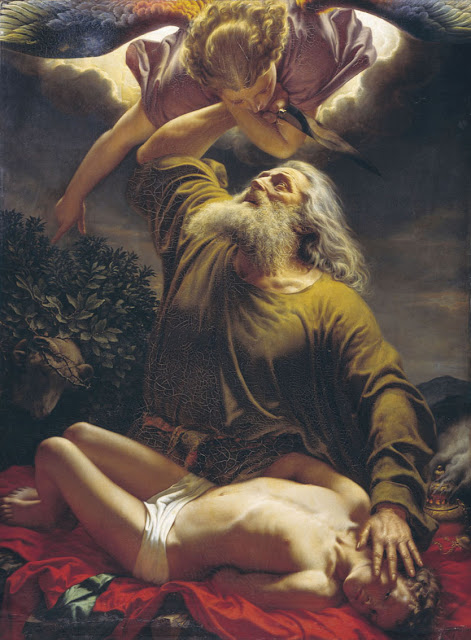 At Genesis 22, we reach one of the most important Christological stories of the Old Testament, layered just as richly with hints of God's salvation through Jesus Christ as are the accounts of Noah's flood or the flight from Egypt. This story recounts how God asks Abraham to bring his beloved son Isaac up onto a mountain and to kill him there, sacrificing him as a burnt offering. Of course, that's not what happens in the end: God intervenes just before Abraham deals the fatal stroke, and a ram is substituted as the burnt offering in Isaac's place. For pathos and drama, there is no other story in the Old Testament that surpasses it.

The sacrifice of Isaac is usually taught as a tale about God testing Abraham's faithfulness. And it certainly is that--the story opens with the assertion "God tested Abraham" (v.1) and closes with the Angel of the Lord commending him for his faithful obedience (vv.15-18). But despite that clear, biblically founded interpretation, this story has always left students of the Bible with lingering questions, and sometimes with grave doubts concerning the character of God. After all, what sort of God would ask one of his followers to do such a thing as offer a child sacrifice? That's the sort of despicable, abhorrent behavior that characterizes the worship of demonic gods like Molech later in the biblical narrative, abominations which God himself passionately forswears. And while it's true that God's plan from the beginning was to save Isaac, Abraham is not clued in to that part of the drama. For all he knows, he actually is being asked by God to murder his beloved son, so it seems unnecessarily cruel to Abraham to put him through this kind of serious emotional trauma.

Now, while Abraham knew God in a personal way, he certainly did not know God in the same intimate manner that we, who follow Christ and have the indwelling Holy Spirit, know God. Therefore, the doubts that pop up in our minds (such as, "This is simply not the sort of thing that the God revealed in Jesus Christ would ask someone to do") would not have occurred to Abraham. He did not have the same benefits of a fuller knowledge of God's character such as we have. He was still learning about this God, who had called to him out of the blue while he was living in Ur of the Chaldees, and what God asks of him here, while devastating, was perhaps not really something unheard of in the religious cultures around Abraham. So he, not yet fully knowing the infinite depth of this God's love, probably assumed that this command was sincere (indeed, Hebrews 11:17-19 assumes as much--that Abraham actually thought God would expect him to kill Isaac). And so his response is, indeed, an act of faithful obedience. Abraham himself is not some kind of monster for going along with this; he was simply a man of his time, seeking to obey the God that had personally called him, guided him, and shown him grace in countless ways up to this point. We don't know exactly what was in Abraham's mind at that moment, but it is certainly possible that, given the remarkable favor he had already received from God, he may have had a faithward inkling that there was some further grace yet to be played out in that situation. Hebrews 11:17-19 backs up this conjecture, by declaring the Abraham believed the promises of God having to do with Isaac to such an extent that he expected Isaac to be slain and then for God to raise him from the dead. I say all of this about Abraham's inner motivations in order to affirm his act of faith here, as Genesis itself does, because what I say next might seem to cast doubt on the merits of his act. The truth is, if someone in my church came to me and said that God had ordered them to kill their child, I would urge them, in the strongest possible terms, not to obey that command. (And then I would contact the police, as I am required to do by the laws of my state.) Why would I dissuade them? Because the command they heard cannot have come from the God that we know in Jesus Christ. It is simply not something that he would ask any believer to do.

And yet he does ask Abraham to do it. So what's going on here? How is it possible that God does something here that the God we know would never actually do? Well, this story represents a special case in the history of God's relationship with his people. In this story, God does, in fact, ask Abraham to do something that he will never (nor would ever) ask any of his followers to ever do again: kill his own child. (The only possible biblical parallel is the tragic story of Jephthah's daughter in the book of Judges, but that passage is best interpreted as a tragic shortcoming of Jephthah's wisdom and discernment, not of God's actual command.) The reason why God does this here, and nowhere else, is because he is setting up a scene, a play-acted drama, that will point directly to Jesus Christ, and the memory of this story will prepare the hearts of his people to understand the lengths God went to, out of love for us, to secure our salvation. Abraham has to play out a role that he didn't ask for and that he didn't want, simply because he was the forefather of God's chosen people, the only man through whom God could set up this scene to its desired effect. It may seem cruel to Abraham in that particular moment, but God allows him to suffer a short period of unknowing grief in order to make a much larger point, one that will carry down through the ages and prepare the people of Israel for the sacrifice of the Messiah: God was going to give up his only-begotten Son, the Beloved, to die as a sacrifice. Abraham, in this story, foreshadows the place of God the Father himself. So, yes, no doubt Abraham suffered terrible grief as he and Isaac walked up to the mountain of sacrifice. But it was a grief that God shared: the brokenhearted anguish of his beloved Son walking up the mountain with the wood on which he would be slain. And in the end, God in his mercy spares Abraham from experiencing the grief of actually losing his son. But two thousand years later, on perhaps that very same mountain, there was no one there to stop the death of God's Son. The Beloved was slain, and the heart of heaven grieved. In next week's post, we'll look at the specific symbols within this story of Genesis 22 that point unmistakably to Christ.