Glimpses of Grace: Ishmael, Isaac, and the Angel of the Lord 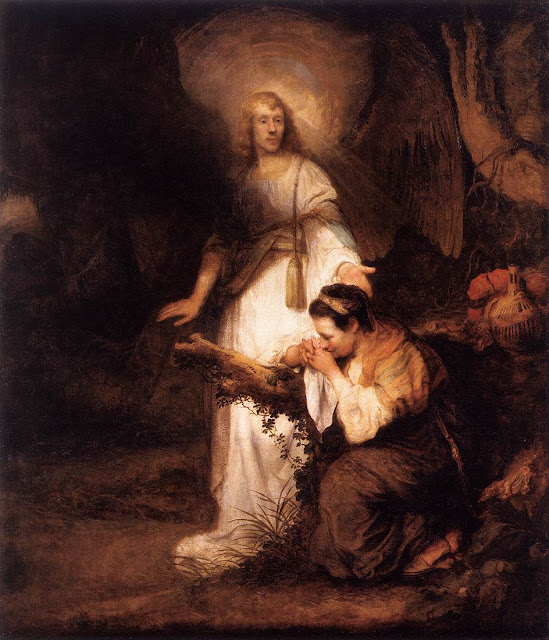 In Genesis 16, the story of Abraham takes a sharp turn: Sarah decides to make her own arrangements to provide the family a son and heir, and so persuades Abraham to conceive a child with Hagar, a slave. The result of this plan is the birth of a son to Abraham and Hagar, Ishmael. This was a rather poor plan, because not only does Sarah end up feeling jealous at the end, but it soon becomes clear that this was not God's intended plan for providing an heir to Abraham, which would later come through the miraculous birth of Isaac to Sarah in her old age. These two sons of Abraham, Ishmael and Isaac--the son born of practical necessity on the one hand, and the other the child of promise, fulfilling the plan of God--were taken by early Christians as a foreshadowing of the two covenants. Ishmael and his mother Hagar represented the Old Covenant with the Law of Moses, the arrangement built out of practical necessity to prepare God's people for what was coming; and Isaac and his mother Sarah represented the New Covenant in Jesus Christ, the true and final fulfillment of all God's promises. And it wasn't just the early church fathers who held this view (though one couldn't be faulted for thinking so, because they certainly loved their allegorical interpretations); no, this reading of Scripture is built right into the New Testament itself, with the Apostle Paul saying in Galatians 4:24-28, "These things are being taken figuratively: The women represent two covenants. One covenant is from Mount Sinai...this is Hagar.... But the Jerusalem that is above is free, and she is our mother.... Now you, brothers and sisters, like Isaac, are children of promise."

But there's another important connection to Christ in Genesis 16. Despite the whole messy affair of this misconceived plan, God shows tremendous sympathy to the victims of it, Hagar and Ishmael. After the pregnant Hagar runs away from Sarah's abusive behavior, she encounters a messenger of God out in the desert. This is usually portrayed as an angel, because the text in English reads, "The angel of the Lord found Hagar." But we must remember that in Hebrew, the word for "angel" (malak) is simply the word "messenger" (so, for instance, the prophet Malachi's name could be read as "my angel" but is more likely to mean "my messenger"). So when we see "angel" written in our Bibles, we need not immediately jump to the image of a white-robed, clean-cut guy sporting swan wings. There may be other interpretive options.

In this passage, as in many others in the early books of the Old Testament, this "angel" appears to have a very specific and special identity. He is referred to as "the Angel of the Lord," and in most of the stories where he appears (which we will examine in this series of studies), he often ends up being referred to simply as "God" or "the Lord" by the end of the scene. In the story of Hagar's meeting with the Angel of the Lord, he commands her to return and gives her an encouraging prophecy about her son's destiny. The narrative is very clear at the outset that it is "the Angel of the Lord" who speaks to Hagar. But let's look now at the end of the story, which clearly identifies this character simply as "Lord" and "God." Verse 13 says, "She gave this name to the Lord who spoke to her: 'You are the God who sees me,' for she said, 'I have now seen the one who sees me.'" The story very clearly indicates that "the Angel of the Lord," the character who spoke to Hagar and whom Hagar saw, is not just any ordinary angel, but is, in some sense, God himself. Indeed, when the verse refers to "the Lord who spoke to her," it uses the Hebrew word for the personal name of God, Yahweh.

Now, if this were the only instance of this odd occurrence, we might write it off as just a peculiar spot of interpretation. But this same sequence happens repeatedly throughout the first seven books of the Bible (with a few further references even beyond those): the Angel of the Lord shows up, and by the end of the scene is being accorded the status of God himself. Because of this common pattern, Christian interpreters have often seen "the Angel of the Lord" as a pre-incarnation appearance of Christ, the Son of God. Indeed, Christ is "the Messenger of God," the fully-divine Logos which God the Father is eternally speaking forth as his self-expression toward his creation. The Son of God did not merely act as the Father's messenger once, during his incarnation; it has been his role from the beginning; and he appeared at many crucial moments in the history of his covenant-people to prepare their hearts for his "Great Entrance" (to borrow a phrase from the ancient Christian liturgy) in his incarnation as Jesus of Nazareth.