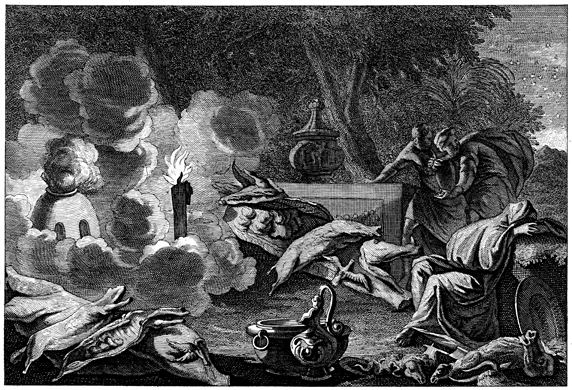 To many readers, Genesis 15 is one of the most mystifying chapters in the entire Old Testament, particularly in the odd scene of God appearing as a smoking firepot and torch between the slaughtered halves of the sacrificial animals which Abraham set up. I recall reading this passage as a teenager, and the only takeaway I could get from it was "Man, God can be pretty weird!" Well, while it might be true that an infinite being who is "wholly other" can indeed strike us as weird sometimes, the truth is that this chapter is layered with intricate symbolism that points powerfully to Christ.

The early Christian tradition found hints of Jesus beginning with the first line of the chapter: "The Word of the Lord came to Abram in a vision: 'Do not be afraid, Abram. I am your shield, your very great reward.'" While this might strike one as a simple statement of a mystical conversation with God such as Abraham often had, it's worth asking why it's phrased the way it is. In particular, if it is the word of the Lord that came to him, why is it described as a "vision," which usually entails seeing something? Why not just a disembodied voice? Wouldn't it be more consistent to say either (1) "The Lord came to Abraham in a vision," if there was something there to be seen, or (2) "Abraham heard the word of the Lord," if it was merely a vocal revelation. The way that it is phrased, however, seems to indicate that "the Word of the Lord" was a visible appearance of a person of the Godhead, and in Christian tradition he would be identified as the Son of God (see John 1:1). While we're putting a lot of weight on a simple turn of phrase, it may indicate that Jesus himself is talking to Abraham here.

The conversation which follows leads to an important reaffirmation of God's earlier promise to bless Abraham's "seed," in which the Word of the Lord makes a specific promise of a flesh-and-blood heir to Abraham, as well as underscoring the further promise that this will lead to a "seed" as vast as the stars in the sky--a promise which is later fulfilled in the prophesied "seed," Jesus Christ, and in the members of his Body, who truly do outnumber the visible stars in the sky (see Gal. 3:16, 3:29). Genesis 15 sums up this conversation with verse 6, which would later form the foundation of Paul's interpretation of law and faith in the New Testament: "Abram believed the Lord, and he credited it to him as righteousness." That is to say, it was by faith alone, apart from any works of the Law (which had not yet been established), that Abram was made righteous, and so too we are made righteous simply by faith in Christ Jesus.

But here's where things get weird. In verse 8, Abraham requests some kind of assurance of God's promises, so God instructs him to set up a covenant sacrifice. If you didn't know what the following scene meant in that cultural context, it would verge on the truly bizarre: Abraham must take one each of the three common sacrificial animals (cow, goat, and sheep), each three years old, and butcher them with halves of their carcasses arranged on one side and the other halves on the other side. He also took a dove and a young pigeon, which were killed but not split, and set one each on opposite sides.

So you have a gruesome, bloody trail set up between the torn-apart carcasses of several animals. What's going on here? Thankfully, with a little study, we actually know what this all means. God is instructing Abraham to construct a covenant sacrifice, a common ritual in the wider Near Eastern culture. He is giving Abraham an affirmation that will be meaningful to him in his cultural context. Here's how such covenant-sacrifices worked: the two parties who were entering in covenant together would walk together down the trail between the torn-apart bodies as a solemn, blood-oath reminder that the same fate which befell those animals would befall whichever party was unfaithful to the agreement. So Abraham would be expecting God to appear in some form, and that he and God would walk together between the carcasses. In Hebrew, to make a covenant is literally described as "cutting" a covenant (in the same way that we describe "cutting a deal"); language that refers to this very practice.

Now before we get to what actually happens when God appears, it's perhaps worth pointing out that even in the animals themselves, we already have some familiar Christian typology. Note that they consist of the three common hoofed sacrificial animals, each three years old (a repetition of threes that, to the Christian mind, immediately draws the mind to the Trinity). The dove/pigeon (which, if you read my Theological Bestiary, you would know are essentially the exact same kind of bird), which is specifically commanded not to be split, draws to mind the common imagery of the Holy Spirit, which we've already noted at least once in Genesis, connected to the Noah stories. Now why would you need another symbol of the Holy Spirit, on its own, when you just had a symbol of the Trinity anyway in the other sacrificial animals? The answer may be that there will also be symbols of the remaining two persons of the Trinity appearing in this story, likewise in addition to the Trinitarian symbolism of the three hoofed sacrifices.

Anyway, Abraham has to wait awhile for God to show up, and eventually he falls into a deep sleep (v.12, calling to mind Adam's deep sleep in the creation narratives--Gen. 2:21) and is surrounded by "dreadful darkness" (a common symbol for the awesome, ineffable unknowability of God, which Moses encounters in his ascent up Mount Sinai--Ex. 20:21; Ps. 97:2--and which later Christian tradition would apply to the Christian's experience of God in "the dark night of the soul"). Then the Lord speaks to him (again, in contrast to the apparent visible sight of "the Word of the Lord" in v.1) and gives a detailed prophecy of Abraham's descendants' exile in slavery in Egypt, after which they will return. It's important to note that God is telling Abraham about the set of events that form the clearest Old Testament allegory about his plan of salvation through Christ (slavery in Egypt=slavery in sin; liberation=salvation).

Next comes a visible apparition of God, but it's a strange one: "a smoking firepot with a blazing torch appeared and passed between the pieces" (v.17). We'll get to what the symbols mean, but first we should note that the thing that would have astonished Abraham the most about this was that he was not a participant! Remember, according to his cultural traditions, he would have been expected to walk with God through the pieces of the animals. Instead, you have two symbols of God himself carrying out the action of "cutting the covenant." Here we have God declaring that he takes upon himself the full responsibility for the covenant he makes with Abraham; that he will not break it, even if Abraham and his descendants are unfaithful. Further, by taking both roles in this ritual, God is essentially declaring that if Abraham or his heirs violate the covenant, God will take upon himself the penalty of having his flesh torn apart. With that staggering thought in mind, now consider the two images themselves: a smoking firepot and a blazing torch. Both of these incorporate symbols of fire and light, which were common ways that God portrayed himself in visible appearances (for instance, think of the pillar of fire that guides the Israelites through the desert). But there's more: the symbols are different enough from each other that they seem to indicate different parts of the Godhead. The word for "smoking firepot" designated a common piece of household furniture in the ancient world: a bed of embers from which one would light a torch. Please note, then: the torch shares the same nature of flame as the firepot ("of the same substance," to use a Christian theological phrase), but the torch's flame clearly comes from the firepot, and not the other way around. Thus we have two symbols, one of which appears to be the Begetter and one of which is the Begotten. The firepot, then, stands for God the Father, and the blazing torch stands for the Son of God, Jesus Christ, the Light of the World, eternally begotten of the Father. (And remember, the specific symbol of the third member of the Trinity, the Holy Spirit, is already present in the unbroken bodies of the doves.) Essentially, then, you have the eternal, Trinitarian God declaring this covenant with Abraham and his heirs. And Jesus' role, as the blazing torch, is to stand in the place of Abraham, to represent his responsibility in the covenant arrangement and to take the penalty upon his own body should Abraham's heirs violate that covenant. And, of course, this is indeed what happens: because of our sin, Jesus Christ has his flesh torn and is put to death on the cross, in fulfillment of this prophetic covenant sacrifice. Considered in that light, then, this bizarre story becomes a startlingly clear portrayal of God's eternal plan to save us from our sins by dying for us on the cross in the person of Jesus Christ.

In Genesis 15, the story concludes with God's specific promise to give Abraham and his descendants the Promised Land. This promise is fulfilled throughout the course of the Old Testament story, as the Israelites return to Canaan after their exile and take possession of the land. As we will see, the Christian tradition has often taken these events as a foreshadowing of the promise made to us, that we will likewise inherit the "promised land" of salvation, blessedness, and peace with God in his eternal glory (see Heb. 4). Thus we see that in this story of Abraham's encounter, we have both a specific short-term promise and fulfillment, in the redemption of Israel from Egypt and the possession of the Promised Land, as well as the further and final fulfillment in our redemption from sin and the possession of an everlasting life of blessedness in Christ--all ratified by Christ's decision to take our punishment upon himself.
Posted by Matthew Burden at 5:00 AM