Genesis 17: Circumcision, Blood, and Promise on the Eighth Day 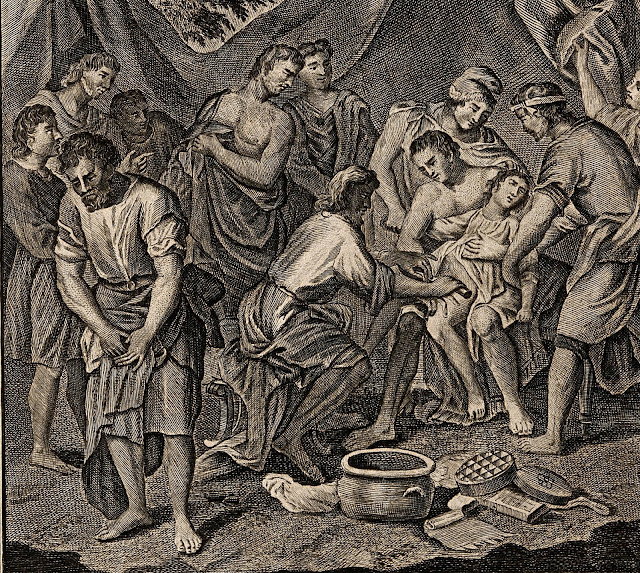 As if God hadn't already asked Abraham to do a whole bunch of weird, crazy things (like moving to the other side of the known world and setting up a gruesome field of animal carcasses), the next act in God's relationship with him was intensely strange. He told Abraham, and all his male heirs in perpetuity, to express their fealty to the divine covenant by slicing the foreskin off of their genitals. (But remarkably, this is still not the wildest thing God will ask Abraham to do, as the story of Isaac's sacrifice in ch. 22 will demonstrate.) Male circumcision is not an uncommon ritual, as it appears in cultures all over the world, many of which had no direct connection to this biblical imperative. The story suggests, however, that it was not a normative practice in Abraham's own culture, and thus this story begs the question of why this particular rite, with all its messiness and indignity, is the one that God chooses as the definitive marker of the covenant-relationship.

Before we get into the possible meaning behind this ritual, let's first notice that this is not a story about God simply speaking his instruction to Abraham as a disembodied voice. No, this is a story in which God clearly shows up in a visible appearance in order to talk to Abraham (see verses 1, 3, and 22 of Genesis 17). As we've already mentioned, the early Christians saw in these visible appearances of the invisible, unknowable God a clear indication of the work of the Son of God, who is and always has been the Logos, the self-expression of the Father, and "the image of the invisible God."

Now back to the question at hand: why circumcision? It goes without saying why this ritual strikes many as distasteful, so why does God elect this particular means as his chosen symbol? Why, when there were so many other noble, elegant possibilities, would he choose this gritty, pain-ridden, embarrassing act, which has nothing of dignity about it?

There are a few possible answers. One direct connection should jump off the page immediately, given the way circumcision was described in the foregoing question. It just so happens that God's plan to save the world, his ultimate expression of his eternal covenant with mankind, would be accomplished through a gritty, pain-ridden, embarrassing act, which had nothing of dignity about it. The death of Christ on the cross was bloody, shameful, and shocking. It did not suit our sense of tastefulness or elegance. And yet that was the thing God used to remake the world and claim his people forever as his own: in a word, the blood and shame of the cross led to the final "circumcision of the heart" which the ancient prophets had foreseen. The indignity of circumcision thus seems to be a good fit as a possible foreshadowing of the cross, and a further potential connection might be seen in the fact that this ritual is enacted upon the generative member of the male body. After all, it is through the biological succession from Abraham that the promise will be fulfilled. Indeed, the main promise with which Genesis 17 is concerned is the promise of a baby: in this case Isaac (the child of promise who is himself a foreshadowing of Christ). With this fact in view, it is no surprise that the biological reality of procreation, which was the means by which Abraham's family would lead to Mary and her miraculous conception, would be highlighted in the manner of the definitive covenant-act.

There's another connection to Christ here, too. God instructs Abraham that this ritual of circumcision should be performed on male babies on the eighth day. There are likely practical and medical reasons for this period of waiting; practicing surgery on newborns was not necessarily the safest thing to do. But the fact that that period of waiting was eight days was immediately seized on by the early church. Eight, as we have seen in previous studies, is the number that indicates the New Creation (for more, read my earlier article on the meaning of God's Sabbath-Rest in Genesis 2). Just as seven is the number of completeness, of the fullness of a week, eight is the day of Jesus' resurrection, the beginning of a new week of creation which commences with the re-creation of the human heart through the salvific work of Christ. Indeed, the early church father Augustine said (in reference to circumcision in Genesis 17), "What else does the eighth day mean than Christ, who rose again when the week was completed?" So the fact that the sign of the covenant was to come on the eighth day is important: it definitely points the way straight to Jesus, and to the fact that his bloody and undignified act would be the one that would usher in the promise of New Creation and of the eternal covenant of the gospel of grace.

There's one final connection to make. It's not implied in Genesis 17, but the New Testament makes a clear tie between circumcision and baptism (which is one of the reasons why paedobaptist denominations baptize infants, just as circumcision was practiced on infants). Colossians 2:11-12 says, "In [Christ] you were also circumcised with a circumcision not performed by human hands. Your whole self ruled by the flesh was put off when you were circumcised by Christ, having been buried with him in baptism..." This passage not only connects circumcision with baptism, but draws out another meaning of that bloody ritual. Just as circumcision entails the "putting off" of part of the old form of the body, so also our regeneration by grace includes the putting off of an old existence and the beginning of a new one, ushered in through the blood of Christ. Circumcision, then, is a ritual of regeneration, of the change that comes from putting off the "old man" and being transformed into something new. In this sense, it is the exact parallel of baptism, which also symbolizes the dying of the old man, his burial in the immersion of the waters, and then our rising again to new life in Christ.

To put it plainly, circumcision without Jesus and without the gospel of grace would just be a weird, awkward, Bronze Age custom without much depth to its symbolism. But considered in light of Jesus' bloody, undignified sacrifice, which transforms us from an old existence into a new reality and which ratifies forever the eternal covenant of grace for us, circumcision becomes a potent, dramatic window into the salvation-plan of God.
Email ThisBlogThis!Share to TwitterShare to FacebookShare to Pinterest
Labels: Biblical Interpretation, Theology
Newer Post Older Post Home