Glimpses of Grace: The Tower of Babel as Pentecost in Reverse 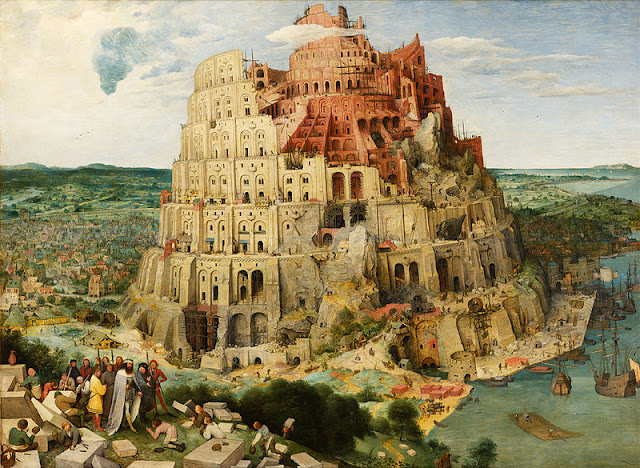 Sandwiched in between the biblical hero-epics of Noah and Abraham is an odd little story: the Tower of Babel. It tells the tale of how the the first civilization after the Flood sought to laud its own prestige by building a tower that reached to the heavens. And it also tells how God, in seeing the overweening pride of these people (and apparently also in wariness of their technical capabilities--see Gen. 11:6), halted their project and scattered their civilization by making them all speak different languages.

I call this story an odd one because it isn't really the most plausible scenario for God's judgment on that civilization. If God just wanted them to give up on monumental building projects, there are other methods at his disposal (as, say, having the earth swallow the tower up, or simply making the thing fall down). And if his goal was just to get that civilization to fragment and emigrate elsewhere, a little divine patience would have done the trick: humanity does almost nothing as well as fragment its own societies through the mindless stupidities of war and through the incessant call of claiming a territory to call one's own. Given enough time, the civilization of Babel would have disintegrated on its own. Further, if God is actually worried about humanity's power to build things, as this story appears to indicate, then he probably should be messing around with our languages right now, because computers and space flight are even more terrifying than giant mud-brick ziggurats.

Those aren't the only odd things about this story, either. Here's another one: what is portrayed as a punishment here (the inconvenient multiplication of languages) is now usually seen as a blessing. To linguists and to theologians who have done the hard work of learning to study in other languages, it is a self-evident truth that the diversity of languages has added to, and not detracted from, the power of humanity to think, dream, and build in marvelously creative ways. Different languages give us more than just different words to express our thoughts; they actually give us different paradigms for our thoughts to follow. That is to say, a second language will enable you to think differently about the world than a first language will, and vice versa. Languages foster their own distinct mental cultures. Any second-year seminary student can tell you about the richness that we gain in our theology from having a Bible that is written in two different languages (Hebrew and Greek), and that it is often the differences in those languages, the varying things that each set of grammar and vocabulary does well, that gives added depth, flavor, and power to the pages of holy writ. My linguistics professor used to say (of the Tower of Babel story) that even in his punishment, God was blessing the nations of the earth.

All that to say, this story is a little odd, at least in being counter-intuitive. We could readily imagine other ways that this story could have played out, rather than with God messing around with the insides of people's brains (which, truth be told, is certainly not the normal way he does things in Scripture). So what's going on here? Why are we faced with this rather strange solution to a problem that doesn't even seem to be a problem (because, after all, why would an all-powerful, omniscient God need to be worried about the heights of technical achievements open to man)?

One of the answers might be that God, in giving this "punishment" (which was really a blessing in disguise), was both meeting a present goal as well as setting up a foreshadowing of something much greater, something to come in the future. His divine action at the Tower of Babel justly humbles the dangerous pride of humankind, and it sets the stage for one of the greatest moments of salvation-history in the future: Pentecost, the moment when the curse of Babel began to be undone through the power of the Holy Spirit.

You see, the Tower of Babel is really another story about the Fall. Just like the holy human beginnings of Adam and Eve in the Garden were disrupted by the sin of pride (Eve's desire to eat the fruit and "become like God, knowing good and evil") and by the brokenness of human relationships (Cain's murder of Abel); so too the holy renewal of human beginnings through Noah was also disrupted by the brokenness of human relationships (the strange story of the "curse of Canaan" in Gen. 9) and by the sin of pride (the desire of the builders at Babel to reach up to the heavens). In fact, God's strange concern about what humanity might be able to achieve, quoted in Gen. 11:6 ("Nothing they plan to do will be impossible for them"), is best interpreted as a parallel to the danger inherent in the original sin in the Garden ("They will be like God, knowing good and evil"). You have the same sin (the pride of wanting to be like God), and the same danger stated (that humanity actually can, in some way, become like God--an idea that finds its fulfillment, incidentally, in Orthodox Christian theology). All that to say, the story of the Fall in the Garden of Eden and the story of the Tower of Babel are meant to be read in parallel. They are both the stories of the Fall of mankind after a promising, holy beginning (first in Eden, and then again after the renewal of the Flood).

And, marvelously, there are hints of redemption in the brokenness that follows each story: the pain of the Fall is made manifest in the death of the holy son Abel; and many centuries later, God's redemption from the Fall would be made manifest in the death of another holy Son. In an exactly parallel way, the pain of the Fall at Babel is made manifest in the divisions in humanity that occur from the multiplying of languages; and many years later, God's redemption would renew humanity's unity from the inside out, bringing the languages of the nations together in one outpouring of proclamation and praise. At Pentecost, when the disciples were filled with the Holy Spirit and went out to publicly proclaim the Gospel of the risen Christ for the very first time, that proclamation was made in such a way that "every man heard it in his own language" (Acts 2:6). It was the undoing of Babel, the making right of an ancient sin, a redemption that brought healing to the divided body of humanity. Where once we were split apart by many different languages, identities, and agendas, now by the grace of God and the power of the Holy Spirit there is no longer Jew nor Greek, slave nor free, male nor female: we are all one in Christ Jesus. In the Christian church, inaugurated at Pentecost, Babel is being undone.
Email ThisBlogThis!Share to TwitterShare to FacebookShare to Pinterest
Labels: Biblical Interpretation, Theology
Newer Post Older Post Home