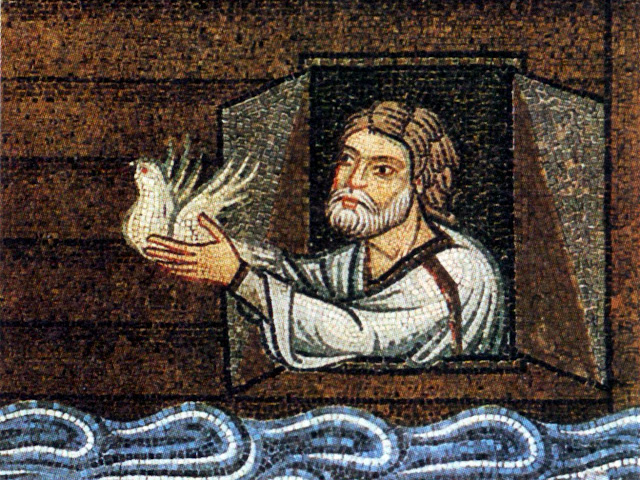 In this final post on Noah's Ark, we'll tie up the loose ends of a few remaining symbols. Once again, the most important, overarching theme that the early Christians saw in the story of Noah's Ark was a foreshadowing of God's plan of salvation through Christ Jesus. The reason for this, as we've seen, is that the theological problems of sin and salvation are addressed in much the same way in the Ark and the Cross. Further, the Old Testament writers themselves saw something significant in Noah's boat, something that struck to the deepest part of God's plan, because they named it after their most sacred symbol, the Ark of the Covenant, rather than giving it the name of a conventional boat.

But there are a wealth of other symbols that the early Christians noticed, too, and we'll deal with them quickly here. One major point of connection was the symbol of water--just as God's cleansing of the world's sin comes by way of water (the Flood), so also God's cleansing of our sin is symbolized by water (the immersion of baptism). And if you might think that this is something of a stretch, you ought probably to consider that there are other stories in the Old Testament that relate to salvation from destruction, divine healing, and inheriting God's promise that also include stories of passing "through the waters" (the parting of the Red Sea in Ex. 14, the parting of the Jordan River in Josh. 4, and Naaman's healing in 2 Kings 5, just to name a few).

The conclusion of the Ark story has echoes of the idea of a "New Creation" all through it. In the same way that the Old Creation began with Adam and all the animals, and in the way that the New Creation story begins with Jesus amid the animals of the stable, so too here we have a foreshadowing of that New Creation, with Noah and his animals. It is worth noting that in the Christian conception of God's New Creation through Christ, although it begins with humanity, it will one day extend to include all of creation, including the natural world: "The creation itself will be liberated from its bondage to decay and brought into the freedom and glory of the children of God" (Rom. 8:21). The fact that the natural world is represented as being among the recipients of God's salvation from the flood is no accident; it foreshadows the cosmic extent of God's coming salvation in Christ Jesus. Further, as noted before, early Christians would have pointed out that the total number of people saved in the Ark was eight, and eight was the symbolic number pointing to New Creation (being the number of the first day of the new week after the seven days of creation, the day of Christ's resurrection from the dead).

In the conclusion of the Flood story, there are also two prominent symbols of the Holy Spirit's activity: the wind and the dove. Genesis 8:1 tells us that God makes the waters recede by "sending a wind over the earth." Now "wind" is one of the most common symbols for the work of the Spirit (it appears also in the Pentecost story, for instance), because in Hebrew the same word stands for "spirit," "breath," and "wind." One wouldn't want to stretch it too far and make every windy day in the Bible a symbol of the Holy Spirit, but the conjunction of God sending a "wind/spirit" over the waters that covered the earth is almost an exact throwback to Genesis 1:2, where, at the beginning of creation, "the Spirit of God was hovering (or 'blowing gently') over the waters." This striking parallel does appear to amount to a symbol of the Spirit's work in some sort of new creation. And if, as we postulated earlier, the Flood story also contains a foreshadowing of baptism, it's worth noting that the early Christian ritual of baptism was immediately followed by chrismation, a symbol of receiving the Holy Spirit. So, just like the pattern of God's salvation in the Flood was water-and-Spirit, so too the pattern of symbolically receiving God's salvation as a Christian was water-and-Spirit.

The dove also figures large in the conclusion of the Ark story. In chapter eight, Noah sends out a bird four times to see if the water has receded enough to expose dry land: first a raven, which apparently does not come back but simply keeps flying around aimlessly; then a dove three times--the first time finding no land, and returning; the second time returning with an olive branch; and the third time not returning, having found its home in the renewed creation outside. This sequence was interpreted allegorically as well, both by Jews and Christians. In much Jewish tradition, the raven was associated with Satan--a heavenly being who went out but did not return to his Master. The dove was taken by early Christians to symbolize the Holy Spirit (as, for instance, at Jesus' baptism). The three times it was sent out were interpreted in various ways, one of which I'll relate here: the first trip out represented the Holy Spirit's work among the Old Testament people of Israel (as, for instance, in the ministry of the Prophets), but it returns because the New Creation is not yet revealed. The second trip was taken to be the Spirit's work in the ministry of Jesus Christ, and it returns with an olive branch as a symbol of the reconciliation between God and mankind through Jesus. The third trip was taken to refer to Pentecost--the Holy Spirit goes out and takes up residence in the now-revealed first stage of the New Creation: that is, in the church of Jesus Christ.

The story ends with God making a covenant with Noah and all creation (and, once again, the Messianic "seed" is possibly referenced in Gen. 9:9). The symbol for this covenant is the rainbow. One of the most compelling views of this symbol is not an ancient Christian perspective (at least, not that I know of), but a contemporary one: in The Jesus Storybook Bible (quickly becoming an all-time classic children's Bible), Sally Lloyd Jones writes:

"The first thing God did [after Noah came out of the Ark] was make a promise: 'I won't ever destroy the world again.' And like a warrior puts away his bow and arrow at the end of a great battle, God said, 'See, I have hung up my bow in the clouds.' And there in the clouds--just where the storm meets the sun--was a beautiful bow made of light. It was a new beginning in God's world. It wasn't long before everything went wrong again, but God wasn't surprised; he knew this would happen. That's why, before the beginning of time, he had another plan--a better plan. A plan not to destroy the world, but to rescue it--a plan to one day send his own Son, the Rescuer. God's strong anger against hate and sadness and death would come down once more--but not on his people, or his world. No, God's war bow was not pointing down at his people. It was pointing up, into the heart of Heaven."