Glimpses of Grace: The Ark of God 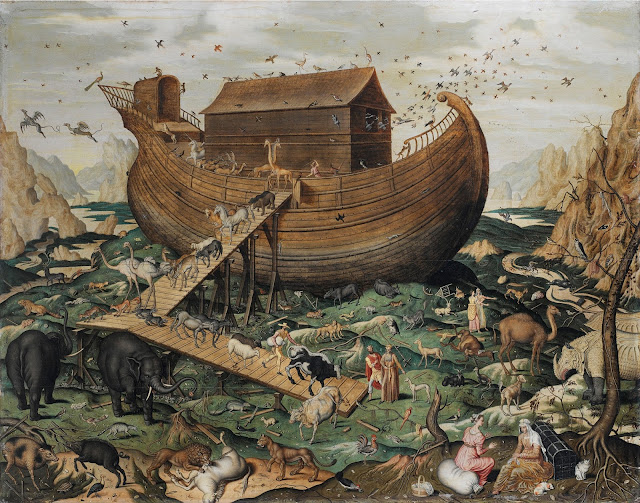 The next time you go down to the dock on the lake, or the marina by the bay, take a quick survey to see how many arks you can spot among the boats assembled there. I'm just guessing here, but I've got a feeling that your tally will probably amount to zero. Why is that? Because an "ark" is not actually a word for a boat, and it never has been.

Except in one case: Noah's ark. (In recent centuries, you might find large, flat-bottomed boats referred to as "arks," but this is simply a reference to that one exceptional case, Noah's ark.) The word "ark" refers to a chest, box, or coffer, and usually a small-to-medium-sized one. Today, we might call it a "jewelry-box." This is its universal meaning, in Old English, Latin, and all the way back to ancient Hittite. Interestingly, even though the Greek manuscripts for the Old and New Testaments use a different root-word for the ark (kibōtos), the same thing is true of that word. It always, in every instance, refers to a box or coffer for holding precious items, and never to a boat. Except, of course, in reference to Noah's ark.

So why is this significant? Because when God speaks to Noah in Genesis 6:13-21 and tells him to build an "ark" with dimensions exceeding a football field, we should understand that he's choosing a really weird word for that set of instructions. It's pretty clear that God intends for this giant thing to be a boat, but he doesn't use one of the many perfectly applicable words for "boat" that would have been available to him. Instead, he tells Noah: "Go and build me a wooden jewelry-box bigger than a football field." Now, you'll have to admit, that's a little strange.

Why does God (and all subsequent biblical references) call it by the name of a small coffer, instead of just calling it a barge or a ship? Clearly, part of the allusion is to its use: in the same way that one would use a coffer or a jewelry-box to hold one's most precious items, this gigantic, floating coffer would also hold God's most precious items--the faithful remnant of his creation.

So what does this all mean? The Ark of the Covenant was the holiest thing in all of Israel, because it was the symbol of God's own presence dwelling among his people. It was, in a very real sense, the physical presence of God on earth. When we apply that to Noah's ark, we get a startling insight into the story of the Flood. As we saw in the previous post, the early church saw the Flood story as a foreshadowing of God's salvation through Christ Jesus. And this linguistic connection between the two arks backs up that insight. In the story of Noah's ark, we have a vision of God's plan of salvation, and an indication, simply by the word that is used, that this salvation will come about by means of the presence of God dwelling physically in our midst. Noah's ark is called an ark instead of just "Noah's boat" because this shows us that the story of salvation is going to be accomplished by an Immanuel figure, God-with-us, in the same way that the Ark of the Covenant was a symbol of God-with-us.

Many interpreters in the early church, then, saw Noah's ark as a foreshadowing of Mary (who is also connected with the Ark of the Covenant, as being the physical vessel wherein God's full divinity dwelt, at least for a time). Or they saw it as a direct indication of the incarnation of Jesus Christ--the material substance of the wooden ark corresponding to the physical, fleshly reality of Jesus' human body (and it did not escape their attention that a symbol of the incarnation would be made out of wood, just as the most prominent later symbol of our salvation through Christ's incarnation--the Cross--was also made of wood). Interestingly, they also sometimes carried it further and saw in the ark a symbol of the Church--that we, who are the Body of Christ and the vanguard of God's New Creation, are the vessel through which God's salvation is borne in the world. So the next time you see a picture of good old Noah and all his happy animals lined up around that giant wooden jewelry-box, remember that it represents a promise that God will save the world through his own presence in our midst.
Email ThisBlogThis!Share to TwitterShare to FacebookShare to Pinterest
Labels: Biblical Interpretation, Devotional Reflections, Theology
Newer Post Older Post Home