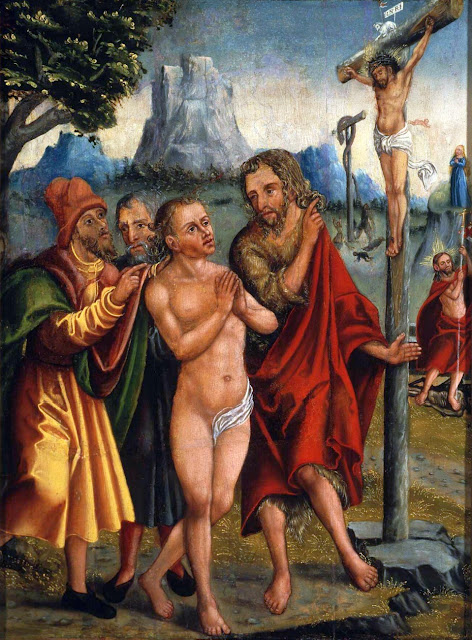 
Salvation – The salvation effected by Christ is both cosmic and personal. It is cosmic in that it aims for the restoration and submission of all things to Christ, bringing forth a new creation in which “the kingdom of God” encompasses all created things, when God is “all in all” (1 Cor. 15:20-28). It is also personal, in that the new creation begins in the hearts of individual men and women who find new life in Christ (2 Cor. 5:17). When the Son of God became incarnate, fully joined to a personal human nature in Jesus Christ, our salvation, which had been planned from before the foundations of the world and set in motion through God’s relationship with Abraham and Israel, was now finally at hand. The union of his divine nature with our human nature represented the inauguration of the re-creation of a new humanity, with Christ as the new Adam (Rom. 5:17-21). In assuming our nature, he introduced in humanity the antidote for the disease of our fallen nature, and enabled us once again to grow toward a transformation into love and holiness (2 Cor. 5:21; Eph. 2:18-19; 2 Pet. 1:3-4), which is our birthright as the image of God. Anyone who comes to faith in Christ becomes a part of this new humanity, and we once again are brought into communion with the divine nature through the person of Christ himself (Rom. 5:17-18; Col. 1:22). Thus by his incarnation he began the deep healing of human nature from its distorted, fallen sinfulness (the first of the problems caused by original sin as outlined above). In his ministry he initiated the presence of the Kingdom of God as a historical, present-on-earth reality (Mt. 4:17); in essence launching an invasion of enemy-occupied territory by healing the sick, casting out demons, and revealing truth that would guide the new and growing community of that Kingdom. When he was crucified, he accomplished several more aspects of our salvation: he gave us certain knowledge of the character of God in its fullest revelation by representing love taken to the farthest degree of self-sacrifice (1 Jn. 3:16); he triumphed over earthly systems of brokenness and oppression by accepting their worst without submitting himself to them; he defeated Satan and the demonic powers and “made a spectacle of them” (Col. 2:15; Heb. 2:14-15; 1 Jn. 3:8); and on behalf of humanity he offered himself as an atoning sacrifice for sin, willingly accepting the consequence of sin—death—even though he himself was sinless (Rom. 3:25; 2 Cor. 5:21; 1 Jn. 2:2, 4:10). These accomplishments were revealed and made final when he rose again, triumphing over sin, Satan, and death itself. After his resurrection, Christ finished his teaching about the Kingdom, ascended into heaven, and bestowed the Holy Spirit on his church. The church thus became the primary locus of the Kingdom of God in the world, “the Body of Christ,” and through its expansion, its mission, and its many vocations in the daily lives of believers, it extends the Kingdom of God further and further into enemy territory in anticipation of the day when the Kingdom comes in all its fullness. The gathered community of the church thus represents the emerging shape of the new humanity and of the new creation, and within its life we are saved unto a communal experience of humanity as it was meant to be: living a life of ongoing transformation into greater likeness to the character of God, and greater unity to Christ (2 Pet. 1:3-4; Jn. 17:20-23). In order to become a part of this ever-marching Kingdom of God, a man or woman must be brought to hear the message of the Gospel and must, through the grace of God, decide to make Jesus Christ the Lord of their life (a decision which includes an act of repentance, of a decisive turning away from one's old ways of living). With this act of faith alone, enabled by the free grace of God apart from any good works, and taking no account of any merits of their own, a person is born again into the new humanity and becomes a “new creation” (Eph. 2:8-9; 2 Cor. 5:17). Such a convert, at the moment of faith, is incorporated into the worldwide, trans-historical Body of Christ and is sealed with the Holy Spirit (Eph. 1:13). Their sins are forgiven through the atonement wrought by Christ, and they are given grace and power to begin the long journey of full healing from the distortions of the sin nature; even more, they are given free and full access to the restored calling of humanity, to grow into ever greater likeness to God as his image-bearers. Without Christ, they would have been cut off from relationship with God, the source of life itself; but with Christ they share in Jesus’ triumph over sin, Satan, and death, and are able to enter into “everlasting life” at that very moment (Jn. 3:36). Instead of the threat of hell, they are given the promise of an endless, joyful existence in the new heavens and the new earth (Rev. 20:15-21:3). This salvation is not just an individual reality in that person's life: it is the shared experience of the entire community of Christians, and it is experienced in its fullness here and now by incorporation into a local church, as a member of "the Body of Christ." The story of salvation does not begin and end with either individuals or the church, though: there are hints in Scripture that all of creation will ultimately share in the restoration of all things through Christ (Col. 1:19-20; Eph. 1:9-10). Nature will be liberated from its bondage to decay and will be re-created in a state untouched by the brokenness of sin (Rom. 8:19-21; Rev. 21:1), to become fully a part of the eternal worship of God in the new heavens and the new earth (Ps. 98-7-9; Is. 65:25).
Posted by Matthew Burden at 5:00 AM