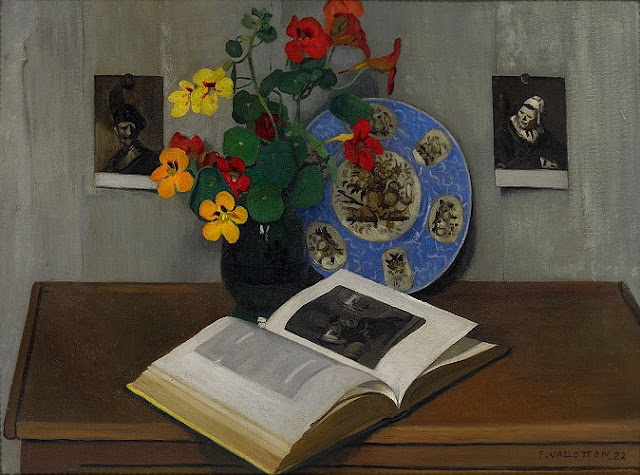 (Painting: "Nature morte à l'assiette bleue," by Felix Vallotton, 1922)
I'm sometimes asked for book recommendations, but the truth is that all my recommendations, while hopefully reflecting something of the innate value of a book, are also deeply rooted in my subjective personal experience. So, for my Friday essays during these summer months, I'm going to be giving some brief book reviews and recommendations by relating the works that have been most influential in the various stages of my life.

Despite what I said in my previous post about reading fiction, the truth is that I don't read a lot of contemporary fiction these days. I read more of it in my youth, and so this recommendation comes from that period of my life--my high school years. One of my favorite authors during that time was Stephen R. Lawhead, a Christian writer of imaginative fiction who dabbled in historical fiction and fantasy (and sometimes a mixture of the two)--both genres which captured my intense interest. He's one of the rare Christian writers in his generation who has broken out of the Christian publishing niche and found a wider audience to his works. Though he usually pens multi-volume sets of novels, Byzantium is a standalone work. It tells the story of an Irish monk, Aidan, living in "the Dark Ages," and of a pilgrimage that takes him (via a few bumps along the way) through Viking lands and Muslim lands before he finally reaches his goal. More than an adventure story, though, it is a novel about Aidan's journey of faith--or, more properly, about his journey of doubt-in-faith. Little did I know what echoes Aidan's story would find in my own; but for whatever reason, I fell in love with this book. It was one of the largest influences in my early writings, inspiring my attempts at historical fiction novels during my high school years (two of which, though not of very high quality, are still available in print--Tactus and Soldiers of the King; another of which is currently being serialized in modified form on this blog--see the sidebar links for A Flame in the Night).

As I said, I don't read a lot of contemporary fiction anymore, aside from the innocent pleasures of an Agatha Christie mystery or a Star Trek novel now and then. Every once in a while I'll try a more literary-quality novel (of these attempts, The Shipping News was the one that most impressed me). But I tend to prefer works of classic fiction rather than contemporary fiction, and I think the reason largely has to do with the literary mood of the era in which we live. I find it to be often too morose and brooding, with a fascination for the darkest parts of human experience (as if they were somehow "more real" than the joyous parts); and those few literary novels that do strike a more hopeful chord seem somehow to have forgotten that plot is an essential element to a decent story. For all those reasons, I find much contemporary fiction (especially of the sort acclaimed by literary circles) hard to stomach, and that's probably why I'll never be a great literary novelist.

It was during my teenage years that I first began to read works of nonfiction, particularly in the fields of practical and devotional theology. A. W. Tozer, the great pastor from the CMA family in the 20th century, was my first guide into these unexplored territories. My parents had a little volume of some of Tozer's essays and sermons, and I found his wise and winsome voice speaking into the very heart of my Christian experience--resounding with a deep-rooted conviction in the truth of biblical revelation, accompanied by an all-pervading mystical sense of the presence of the living God woven throughout my daily experience. It wasn't long before I had devoured a handful of his books, the best-loved being his classic, The Pursuit of God. His books aren't hard to understand (and that's not a criticism; for a practical theologian, that's exactly as it should be, and far rarer a gift than you might think), and I still find myself picking up his books every now and then to drink down a draught of inspiration from this much-beloved pastor/writer. Oswald Chambers, best known for his daily devotional, My Utmost for His Highest, was a writer I discovered shortly thereafter, who, in style and substance, shares many of the same strengths as Tozer. But he had an even deeper influence on me, because, as I delved into his works, I found the voice of a man calling Christians not only to holiness, but to lives devoted to ministry as well. In my first few semesters of college, I read two of his books directed toward the ministry--Approved Unto God and So Send I You--and it was their fervent, hopeward beauties that helped me to dream of a life spent in humble service to the Kingdom of God.
Email ThisBlogThis!Share to TwitterShare to FacebookShare to Pinterest
Labels: Book Review, Recollections
Newer Post Older Post Home