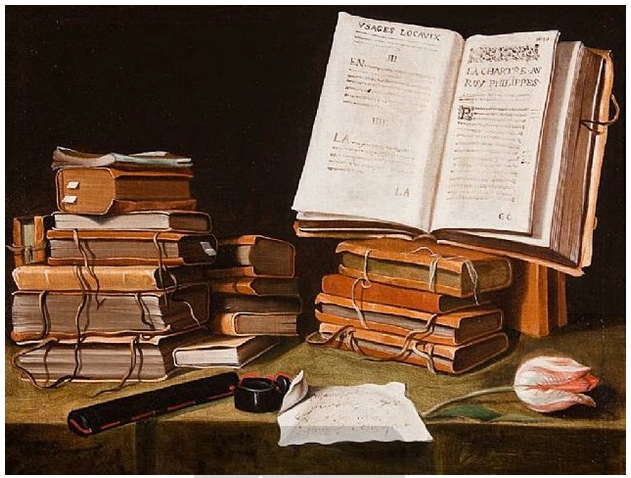 (Painting: "Still Life with Books, a Letter, and a Tulip," by Charles Emmanuel Biset, 17th cent.)

A few weeks ago, my brother and I were talking about books. At one point in the conversation, I said, "It's like that old icebreaker: If you could be stuck on a desert island with only ten books, what would they be?" And it occurred to me immediately that I had said "If you could be..." rather than "If you were..." Talk about your Freudian slips--I'm the sort of person for whom there is something rather appealing about being stranded on an island with nothing but books.

However, despite the obvious appeal of this icebreaker (far to be preferred over, say, "If you were a kind of ice cream..."), ten is just far too few to narrow it down to. I'm sometimes asked for book recommendations, but the truth is that all my recommendations, while hopefully reflecting something of the innate value of a book, are also deeply rooted in my subjective personal experience. So, for my Friday essays during these summer months, I'm going to be giving some brief book reviews and recommendations by relating the works that have been most influential in the various stages of my life. So here's the first part of my "Autobibliobiography" (my life in books): the first two sets of books that shaped me profoundly.

There's nothing else that could head this list, either in terms of influence or temporal priority. From my earliest days, I have had the unspeakable privilege to live as "a person of the Book." Among the children's books of my youth was always a volume--usually more than one--of Bible stories. I can still vividly remember my first full-text Bible (an NIV "Adventure Bible")--I can call to mind the sensation of carrying it into my second-grade Sunday School class at our Brasilia church, feeling the weight of the tome and the fine-cut sheaf of its pages. But the version of the Bible that had the most impact on me in my early years was The Picture Bible--a thorough rendering of the whole scope of the Bible in comic-book form. That may sound a little puerile, but The Picture Bible is remarkably well done; and for a growing reader, as yet not able to drink down long draughts of ancient manuscripts, it had the effect of, quite simply, helping me fall in love with the story of the Bible. And I've never yet fallen out of love with it.

Nowadays, of course, I read the full work in translation form (although I can also stumble through the original Greek NT and the LXX OT). I tend to use the NIV, a happy medium of English fluency and (usually) good translation, but I often refer to the NRSV, NASB, and ESV, and, every now and then, I sink my teeth into the magisterial beauty of the old KJV. In French, I enjoy using the modern classic, the Louis Segond translation. And, now that I have young kids, I'm back into children's Bibles. My highest recommendation for a children's Bible (despite how impactful The Picture Bible was for me) would actually be The Jesus Storybook Bible, by Sally Lloyd-Jones. It's beautiful in its writing and in its art, and it usually reduces my wife and I to tears when we're reading it to our kids.

Several early church fathers were fond of pointing out that God had revealed himself to us in "two books"--that is, the Bible and the "book" of nature. And for me, that has rung true--the natural world has guided me into a deeper understanding of God and intimacy with him, at a level that would have been undiscoverable through mere words, and which remains inexpressible with them alone. When I was in third grade, living on a rustic missionary training camp in Texas, I began to catch glimpses of the beauty of God in one of his most spectacular creations: the glory, the variety, and the ubiquity of birds. My parents bought me a field guide (The Golden Field Guide to the Birds of North America), and I devoured it. The beauty of these beings, who flitted endlessly around the edges of my world in southwest Texas, astounded me. Having birds in my life keeps me grounded in "the real world," and by that I mean something even more real than the endless round of human social affectations that people are usually referring to with that phrase--birds keep me connected to the simple glory of being, of existing as a creature of a glorious God, of living, dying, eating, breathing, and singing for the sheer joy of singing. That's a richness of perspective that I can't really imagine living without.

Now, as an adult, although I still treasure the much-worn pages of my old Golden field guide, my highest recommendations are for the classic National Geographic Field Guide to the Birds of North America (now in its sixth edition)--that's the one I carry around in my backpack on hikes; and The Sibley Guide to Birds--that's the one I keep on my bookshelf and consult at the end of every hike.
Email ThisBlogThis!Share to TwitterShare to FacebookShare to Pinterest
Labels: Book Review, Recollections
Newer Post Older Post Home