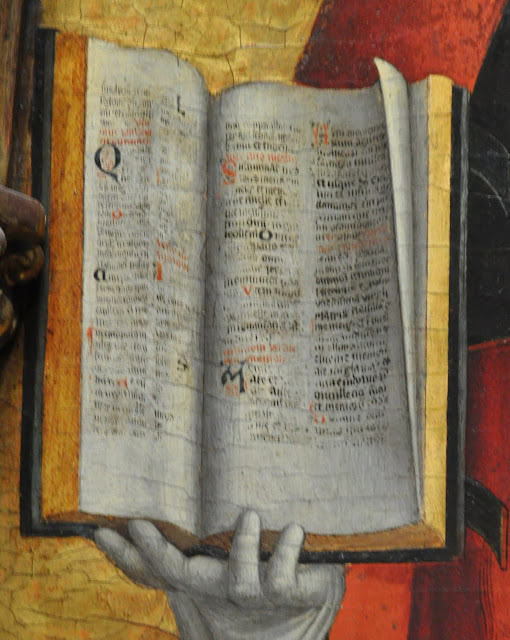 (Painting: "Book in the Hand of Saint Jerome," detail of an alterpiece by Antonio Vivarini, 1441)

As a child (and still today, though to a slightly lesser degree), many of my favorite books were fiction. Occasionally one of my friends or parishioners will confess to me that they don't read much fiction, or that they don't see the appeal of it when one could sink one's teeth into some good, substantial nonfiction instead. Though I'm gracious and polite, and usually say something like, "Well, fiction isn't everyone's cup of tea," the truth is that comments like that strike me rather the same way as if someone has just confessed to me that they don't see any difference between a classical symphony and the noise of a jackhammer, or that one would rather watch the paint dry inside one's house than watch a sunset. I have a genuine flash of compassion and pity for such a person, to whom one of the vastest and grandest arrays of human art and experience is inaccessible.

Thankfully, though, that's not me, not by a long shot. There has always been something about fiction (and, in my early years, about fantasy in particular) that opened to me worlds of imagination that echoed with the plain truths of the grandeur of living as a human being--truths that one could only struggle to find anywhere else (except, perhaps, in the works of the great Christian mystics). Now, fantasy is a broad and, unfortunately, a now shallow and much-diluted genre; one must do a bit of work to find out the deepest, calmest areas that are well worth a dive.

One of those, of course, is C. S. Lewis' tremendous series, The Chronicles of Narnia, written for children, but possessing a grandeur and wisdom that often better rewards an adult reading of them than a child's. Most people who fall in love with the series tend to make favorites of the classic first installment (The Lion, the Witch, and the Wardrobe), or the nautical adventure of the third (The Voyage of the Dawn Treader), or the glorious cosmic resolution of the seventh (The Last Battle). I'm the only person I know who fell in love with the fourth book, The Silver Chair. This might be because it ventures into somewhat darker realms--overcast northern wastelands, lands of man-eating giants, and a subterranean empire ruled by a snake-like witch. But of all the Narnia books, this one does the best at having a single, cohesive quest at its center, and I was a child who loved the adventure of a good quest. It also, intriguingly, has moments in its narrative that have reflected, and spoken powerfully into, later experiences of my adult life. For instance, anyone who has ever wrestled with doubts about their Christian faith should read Puddleglum's speech to the Emerald Witch at the climax of the book: it is heart-rendingly true.

As I came into my middle school years, one of the most formative influences on my faith was the legacy of great Christian heroes from the past. Our home was well-stocked with missionary biographies, and I've listed some of my favorites above. There are other biographies of the same people which are perhaps just as good, or better, but these books are the ones I read, and they struck me powerfully. Encountering J. Hudson Taylor's story of missionary courage and passionate reliance on God was life-changing for me, as was the account of Brother Andrew's willingness to risk it all for the sake of the persecuted church, and of George Muller's powerful prayer-life. There is almost nothing that God can use more powerfully to shape future missionaries and ministry leaders as the stories of his saints. Just last week I saw a testimonial from one of the young missionaries our church supports, who also claimed the influence of a J. Hudson Taylor biography as a turning-point in discerning God's call on his life. So get these stories into the lives of your children, your grandchildren, and your own life too. It's my love of such stories that has led me to weave them into my weekly ministry as a pastor (many such biographical tales are available as sermon podcasts from the link to my church's website in the sidebar). See what God has done to transform the lives of his willing servants, and how he has shaken the nations through them--who knows but that he might choose to do the same through you.
Email ThisBlogThis!Share to TwitterShare to FacebookShare to Pinterest
Labels: Book Review, Recollections
Newer Post Older Post Home