Heroes of the Faith: William Carey 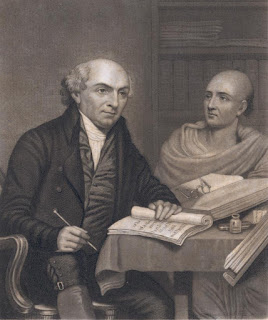 “We have this treasure in jars of clay to show that this all-surpassing power is from God and not from us. We are hard pressed on every side, but not crushed; perplexed, but not in despair; persecuted, but not abandoned; struck down, but not destroyed.”  – 2 Corinthians 4:7-9
William Carey: Basic Facts
- William Carey (1761-1834) is regarded as the “Father of Modern Missions.” Although other missionaries, like the Catholic Jesuits and the Moravians, had preceded him, he opened the floodgates for missionaries from the English-speaking world and made the 1800s the greatest century of Christian missionary activity in all of history.

- Carey was raised in poverty in rural England and worked as a cobbler before entering the ministry. In 1792 he published a book which challenged his fellow Christians on the need to take the Gospel to other nations; its influence led to the founding of the Baptist Missionary Society.

- Carey became a missionary to India and spent the rest of his life there, translating the whole Bible into six different Indian languages, and portions of the Bible into 29 other native languages and dialects.
Timeline of Carey's Early Ministry:

- 1780s – While working as a cobbler, he taught himself Hebrew, Greek, Latin, French, and Dutch. He felt a call to the ministry in 1786, and became a pastor. At a ministers’ meeting, he raised the question of their missionary obligations. One of the ministers replied: “Young man, sit down! When God pleases to convert the heathen, he will do it without your help or mine!”
- 1792 – Carey published his book, An Enquiry into the Obligations of Christians to use Means for the Conversion of the Heathens. The newly-formed Baptist Missionary Society chose Carey, along with Dr. John Thomas, to go as missionaries to India.

- 1793 – Carey and his family (wife Dorothy, and their four sons—the youngest just a few months old), along with Dr. Thomas, set out on a Danish ship for the five-month voyage to India. (They were unable to travel on a British ship because missionary activity was illegal under the rule of the British East India Company.) Almost immediately after settling outside Calcutta, Thomas abandoned them and used up all their mission money to set up his own surgical practice. Carey’s family began to suffer from malaria and dysentery. (The life expectancy for an Englishman in this region was about six months.)

- 1794 – The family travels through vast tracts of swampland to a new area where Carey can earn some income by managing an indigo plant. Thomas rejoins the group, but the Careys’ 5-year-old son Peter dies from dysentery. Dorothy Carey begins a long descent into severe mental illness.

- 1797 – Carey completes the translation of the Bengali New Testament, begins to preach in Bengali, and establishes a school.

- 1798 – Thomas deserts them again to earn money in the rum business; the family is forced to move once more to find a sustainable living.

- 1799 – A group of eight new missionaries arrive to help the Careys, including William Ward, a printer, and Joshua Marshman, a teacher.

These two, along with William Carey, would form one of the most effective missionary teams in history. The new group moves to the Danish settlement of Serampore.

- 1801 – The Bengali New Testament is printed and distributed.
Over the next thirty years, Carey would see his translation work continue at a rapid pace. Hundreds of new believers were baptized. New mission stations were established across India. His team founded local schools and Serampore College, a divinity school for Indian converts. He also saw his first two wives and his son Felix die. Carey himself died in 1834, never having taken a furlough.
- Carey worked hard to bring Christian values to bear on Indian society. He campaigned against the practice of suttee, in which widows were burned to death on their husband’s funeral pyre. He also advocated against infanticide, slavery, and the abuses of the Hindu caste system.

- Carey’s legacy: during the 19th and 20th centuries, a full 80% of Protestant missionaries have been from the English-speaking world. In 1800, only 1% of Protestant Christians were native to Asia, Africa, and Latin America. Today, the number is more than 70%.
Quotes:
“Expect great things from God; attempt great things for God.”

“I can plod; I can persevere in any definite pursuit. To this I owe everything.”

“Is not the commission of our Lord still binding upon us? Can we not do more than now we are doing?”
Posted by Matthew Burden at 5:00 AM