Heroes of the Faith: Robert Morrison & the First Protestant Mission to China 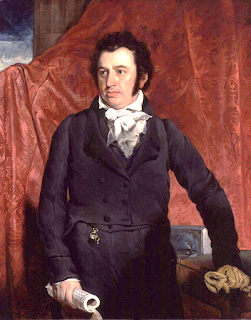 (Click here for an introduction and other installments of this series)
Lecture audio: Robert Morrison
(click here to listen or download)
Through [Christ] we received grace and apostleship to call all the Gentiles to the obedience that comes from faith for his name’s sake. – Romans 1:5

The apostles were brought in and made to appear before the Sanhedrin to be questioned by the high priest. “We gave you strict orders not to teach in this name,” he said. “Yet you have filled Jerusalem with your teaching and are determined to make us guilty of this man’s blood.” Peter and the other apostles replied: “We must obey God rather than human beings!”  – Acts 5:27-29
Robert Morrison: Basic Facts
- Robert Morrison (1782-1834) was an early British missionary to China and an early translator of the Bible into Chinese. He learned Chinese in a period when the Chinese government had made it illegal for foreigners to be taught the language, and when no language-learning aids like dictionaries or grammars existed.

- Morrison was the first Protestant missionary to China, but there had been two other major Christian mission efforts there previously: the Nestorian Church of the East had spread the Gospel in China from the 8th to 10th centuries AD, and the Roman Catholics (particularly through the Jesuits) had been there in the 17th and 18th centuries.

- Morrison’s Bible translation enabled a new wave of missions and church growth in China to take off.
Timeline of Morrison's Life and Ministry: 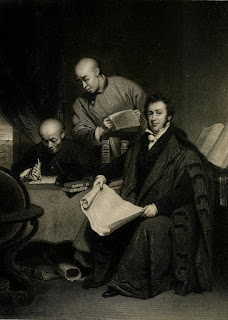 1797-99 – At age 15, Robert Morrison dedicated his life to Christ, and two years later was convicted of a missionary calling after reading a Christian magazine. His great desire was to go to either Africa or China—he prayed “that God would station him in that part of the missionary field where the difficulties were greatest, and, to all human appearances, the most insurmountable.”
1804 – After several years of ministry training, Morrison was accepted as a worker for the London Missionary Society. He committed himself to going to China, prompted by the challenge of translating the Bible into Chinese. The East India Company, which controlled British interests in China, remarked that “the undertaking was a practical impossibility.” Another missionary later said that learning Chinese “requires bodies of iron, lungs of brass, heads of oak, hands of spring steel, eyes of eagles, hearts of apostles, memories of angels, and lives of Methuselah.” But Morrison set about learning the language nonetheless

1807 – The East India Company—the only British service with access to China—refused to allow missionaries to work in its areas of interest. So Morrison had to travel to China on neutral vessels, sailing first to the USA, then all the way around South America and across the Pacific, arriving in Canton in September of 1807. He immediately engaged some secret teachers and began buying all the Chinese books he could afford.

1808-09 – Morrison was forced to move to Macao, a Portuguese colony where the Roman Catholic Church had been active, but the Catholics strongly enforced the Chinese government’s policy against foreigners learning Chinese. Morrison wrestled with a period of depression, but also had some encouragements along the way: he got married and began working as a translator for the East India Company.

1810-12 – The very first of Morrison’s Bible portions are published in Chinese: first Acts, then Luke, and then several books of Christian instruction, all while he continued to work on Chinese dictionaries and grammars. But in 1812, the Chinese government made it significantly more difficult, declaring that printing Christian books in Chinese would be a capital crime.

1813 – After six years, Morrison finally got another missionary colleague, William Milne, only to have the authorities forbid Milne from staying in China. So Milne took up residence on an island and began evangelistic tours in the other Chinese colonies scattered around southeast Asia, all while assisting Morrison in his translation.

1814-18 – Morrison baptized the first Chinese Protestant convert, Cae Gao. Two years later, another, Liang Fa, was baptized, and he became a leading Chinese evangelist. In 1815, Morrison’s wife and two young children had to leave China for health reasons, leaving Morrison alone once again. He was also nearly fired from the EIC during this time.

1819 – A first version of the fully-translated Chinese Bible was finally completed, along with a dictionary and grammar to enable other missionaries to learn the language.

1820-23 – A series of tragedies hit the mission: Morrison’s wife, who had returned to China, passed away from cholera, followed by Morrison’s colleague William Milne; then a fire ravaged much of his hometown of Canton.

1824-26 – Morrison returned home to England for a furlough, where he discovered that he was a celebrity in the scholarly world. He remarried and returned to China, now focused primarily on preaching and printing ministries.

1827-34 – His final years in China were full of more challenges and new opportunities: his press was often threatened and shut down, both by the Chinese government and Catholic authorities in Macao; but new Protestant missionaries were arriving. By 1832, after 25 years in China, Morrison only had 10 Chinese converts, but the harvest was only beginning.
Quotes
[Skeptic]: “Now, Mr. Morrison, do you really expect that you will make an impression on the idolatry of the Chinese Empire?” [Morrison]: “No, sir. But I expect that God will.”

“Some men will not plant a tree because it cannot attain its proper size in their lifetime; but the tree of knowledge which we would plant is not for our individual use alone; it is for the healing of the nations around us.”

“There is now in Canton a state of society, in respect of Chinese, totally different from what I found in 1807. Chinese scholars, missionary students, English presses and Chinese Scriptures, with public worship of God, have all grown up since that period… The words of the New Covenant of our Lord and Savior are in the hands of the Chinese… There are now Chinese missionaries [throughout southeast Asia]… May God forgive the imperfections of our service, and glorify his name.”
Posted by Matthew Burden at 5:00 AM