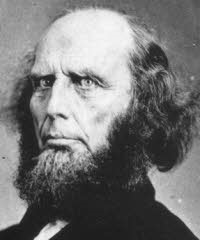 (Click here for an introduction and other installments of this series)
Lecture audio: Charles Finney & D.L. Moody
(click here to listen or right-click to download)
“If you confess with your mouth, ‘Jesus is Lord,’ and believe in your heart that God raised him from the dead, you will be saved.” – Romans 10:9
Charles Finney: Basic Facts 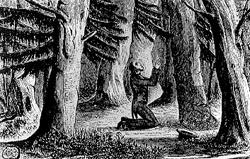 - Charles Finney (1792-1875) was an evangelist in the Second Great Awakening. He preached at revivals across the US and Britain, and claimed 500,000 conversions.

- Originally trained as a lawyer, his preaching followed the pattern of a law argument: carefully reasoned, and calling for a decision one way or the other at the end.

- He emphasized human responsibility to respond to God’s call, and, like many Christian leaders of his day, he believed that the growth of the church and the reformation of society would usher in the return of Christ (postmillennialism). But his greatest impact was not in his theology, but his practices of revival preaching. He preached often about hell, instituted the practice of ‘altar calls’ and ‘anxious seats,’ did away with pew rents, and encouraged lay witnessing and the greater involvement of women in public worship.

- Finney’s most famous book was his Lectures on Revivals of Religion, which is said to have inspired the great Welsh revivals of the 1840s.

- Finney’s theology contributed to the influential Holiness and Keswick movements, which emphasized the possibility of complete obedience to God.

- Finney ended his career at Oberlin College, which led the way in women’s rights and the abolition of slavery.

“Revival comes from heaven when heroic souls enter the conflict determined to win or die—or if need be, to win and die!”

“A revival is nothing else than a new beginning of obedience to God.”

“When sinners are careless and stupid, and sinking into hell unconcerned, it is time the church should bestir themselves. It is as much the duty of the church to awake, as it is for the firemen to awake when a fire breaks out in the night in a great city.” 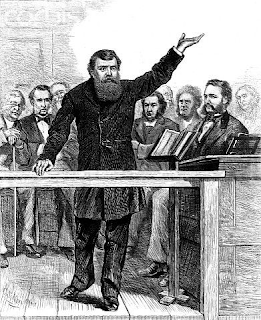 - D. L. Moody (1837-1899) was an evangelist who spoke at revival meetings across the US and Europe. Though originally an impoverished shoe salesman with only an elementary-school-level education, he became an internationally-known speaker who presented the Gospel to 100 million people.

- His early work involved social outreach with the YMCA and a Sunday School program in Chicago, but when the great Chicago fire of 1871 burned down his ministry-buildings, he decided to become a traveling evangelist.

- Moody, unlike Finney, was inspired by premillennialism—a new and more pessimistic view of the end-times that put greater stress on saving souls.

- Moody pioneered some new revival-meeting techniques: co-operation among local churches, and the featuring of a gospel soloist. (Moody’s own musical partner was Ira Sankey, whose hymns remain popular today.)

“The world has yet to see what God can do with a man fully consecrated to him. By God’s help, I aim to be that man.”

“It is the greatest pleasure of living to win souls to Christ.”

“God never made a promise that was too good to be true.”

“The law tells me how crooked I am. Grace comes along and straightens me out.”

“The monument I want after I am dead is a monument with two legs going around the world—a saved sinner telling about the salvation of Jesus Christ.”