Heroes of the Faith: John Newton 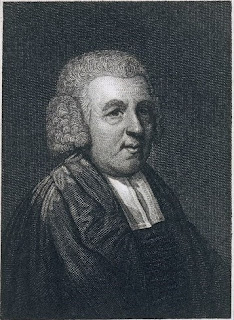 (Click here for an introduction and other installments of this series)
Lecture audio: John Newton
(click here to listen or right-click to download)
Like the rest, we were by nature deserving of wrath. But because of his great love for us, God, who is rich in mercy, made us alive with Christ even when we were dead in transgressions—it is by grace you have been saved. And God raised us up with Christ and seated us with him in the heavenly realms in Christ Jesus, in order that in the coming ages he might show the incomparable riches of his grace, expressed in his kindness to us in Christ Jesus. For it is by grace you have been saved, through faith—and this is not from yourselves, it is the gift of God— not by works, so that no one can boast.  - Ephesians 2:3b-9

Here is a trustworthy saying that deserves full acceptance: Christ Jesus came into the world to save sinners—of whom I am the worst. But for that very reason I was shown mercy so that in me, the worst of sinners, Christ Jesus might display his immense patience as an example for those who would believe in him and receive eternal life.  - 1 Timothy 1:15-16
John Newton: Basic Facts
- John Newton (1725-1807) was a slave trafficker from England who converted to Christianity and became one of the most prominent pastors of his day.

- He is most famous today for being the hymn-writer of perhaps the most well-known hymn of all, “Amazing Grace.” He wrote several hundred other hymns as well, including old classics like “Glorious Things of Thee Are Spoken” and “How Sweet the Name of Jesus Sounds.” In his own day, he was better known for his autobiography, An Authentic Narrative, than he was for his hymns.

- He was a central figure in the early development of the evangelical movement, and was a close associate of several towering figures of Christian history, including George Whitefield (evangelist), William Cowper (poet), Hannah More (writer and social reformer), and William Wilberforce (politician who abolished slavery).

Timeline of Newton's Life and Ministry:
1725-41 – Newton spent his first seven years under the care of his mother, a devout Christian who brought him along to their Congregationalist church, where he learned valuable disciplines of prayer and Bible reading. But his mother died in 1732, and throughout his teenage years he accompanied his sea-captain father on five long voyages, during which time he stopped practicing the pious habits he had learned from his mother.

1742-43 – John’s father arranged for him to take a lucrative post on a Jamaican slave-plantation, but John missed his ship and his father consigned him over the life of an ordinary seaman in the hope it would teach him discipline. It only made John slip further into a worldly lifestyle.

1744-46 – John’s lot worsened when he missed a second assignment on a ship that would have made him an officer, and instead was seized and press-ganged into the royal navy. He attempted to desert, but was caught and flogged. He nearly settled on a plan to murder his captain and commit suicide, but instead was sent into servitude at a slaving outpost on the African coast, where he was mistreated, abused, and became “a servant to the slaves.”

1747-49 – Newton was rescued by a friend of his father’s and took service on a new ship, the Greyhound. There he found a copy of the classic Christian book The Imitation of Christ, and was deeply affected by it. When the Greyhound got caught in a dangerous storm and he thought he would perish, he committed his life to Christ. Though he would go on to backslide and doubt his salvation over the coming months, he always looked back at this desperate moment as “the hour he first believed.” A year later he was struck with a fever and nearly died, and it was at this time that he fully gave himself over to living as a Christian.

1750-56 – Now married and the captain of his own slave-ship, Newton continued to grow in his faith, though the brutal reality of the slave trade was beginning to trouble him. During this time, he heard that an old associate, whom as a young man he had dragged down from a life of piety into dissolution, had died unrepentant and miserable. Stricken by this event, he pledged to devote his life to pulling as many sinners toward grace as he possibly could.

1757-63 – With maritime trade dropping off during the French and Indian War, Newton had the freedom to pursue a different career. He became a disciple of the famous evangelist George Whitefield, studied for the ministry, and applied to pastoral positions throughout England.

1764-79 – Newton became an ordained Anglican rector and pastored a church in the little town of Olney. He became known as a passionate preacher and a great hymn-writer, often writing a new hymn each week to accompany his sermons. During his Olney years he met and influenced one of the great English poets, William Cowper, with whom he published a hymn-book that would go on to make a deep impact in worldwide Christianity.

1780-1807 – John took up a pastoral position in London, and he served the rest of his life there. He began a meeting of Christian leaders, the Eclectic Society, which shaped the emergence of the evangelical movement. He was a powerful influence in the lives of great writers and reformers like William Wilberforce and Hannah More. In his final years, he was an outspoken advocate for the abolition of slavery, and lived to see the end of the British slave trade.
Quotes
“I am not what I ought to be, I am not what I want to be, I am not what I hope to be in another world; but still I am not what I once used to be, and by the grace of God I am what I am.”
“Although my memory's fading, I remember two things very clearly: I am a great sinner and Christ is a great Savior.”

Though afflicted, tempest-toss’d,
Comfortless a while thou art,
Do not think thou canst be lost,
Thou art graven on my heart:
All thy wastes I will repair,
Thou shalt be rebuilt anew;
And in thee it shall appear
What a God of love can do.

- from Newton's hymn “To the Afflicted”