Heroes of the Faith: Duncan McColl

(Click here for an introduction and other installments of this series)
Lecture audio: Duncan McColl
(click here to listen or right-click to download)
Therefore, since through God’s mercy we have this ministry, we do not lose heart. Rather, we have renounced secret and shameful ways; we do not use deception, nor do we distort the word of God… For what we preach is not ourselves, but Jesus Christ as Lord, and ourselves as your servants for Jesus’ sake.  - 2 Corinthians 4:1-2, 5

Keep watch over yourselves and all the flock of which the Holy Spirit has made you overseers. Be shepherds of the church of God, which he bought with his own blood. I know that after I leave, savage wolves will come in among you and will not spare the flock. Even from your own number men will arise and distort the truth in order to draw away disciples after them. So be on your guard!  - Acts 20:28-31
Duncan McColl: Basic Facts
- Duncan McColl (1754-1830) was among the earliest settlers of St. Stephen, New Brunswick, and for most of his life he singlehandedly evangelized and provided pastoral care for many communities in eastern Maine and western New Brunswick.

- Among his many other notable accomplishments, he famously succeeded in preventing the violence of the War of 1812 from affecting the close-knit communities of Calais and St. Stephen, despite the presence of American and British army units in both towns.

- “Rev. Duncan McColl was one of the most remarkable and influential men that ever dwelt in the St. Croix Valley. Hardy, resolute, intelligent and pious, his name is interwoven with all the early life of St. Stephen and Calais; and the impression he made in both towns is too deep ever to be effaced.” – [from Rev. I. C. Knowlton’s 1875 history of the St. Croix Valley] 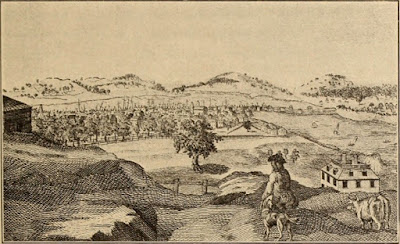 Events of McColl's Life and Ministry:
- In 1777, McColl enlisted in the British army and was sent to North America to fight against the American Revolution, participating in a battle at Castine, Maine.

- While a soldier, he began to explore questions of religion, and gave his life to Christ in 1781. He met his wife, the Methodist daughter of a wealthy Philadelphia family, while stormbound on Bermuda, and they move together to Halifax, Nova Scotia, and then to St. Stephen, New Brunswick, in 1785.

- McColl noticed that there were no pastors and no churches in the whole vast area around him. So he and his wife started a Bible study in their home. Word got around that there was a Christian meeting available there, and soon McColl found himself leading a church service every Sunday within his own house. Though unordained, he took it upon himself to do what no one else was doing, and he made the rounds of the communities all around the St. Croix River and Passamaquoddy Bay, riding and walking to proclaim the Gospel throughout the whole area between St. John and Machias. He was instrumental in introducing the Methodist movement in St. John and Fredericton, as well as in many other places. He was unpaid throughout all this, existing entirely on the hospitality of those he served. Although he himself favored the Methodists (Baptists and Quakers also rated highly with him), he never placed himself under the jurisdiction of any denominational structure, and instead ministered to all believers of any denomination, wherever they had need of him (including a group of Scottish Presbyterian immigrants near St. Stephen, to whom he preached in Scotch Gaelic). He was an outspoken defender of traditional biblical Christianity, and was often the sole religious leader in the area who could hold the line against new and heretical opinions that were infiltrating the region, like antinomianism and unitarian-universalism.

- After a decade of this ministry, McColl undertook a preaching tour in 1795 along with the famous missionary Jesse Lee (“the Apostle to New England”). The goal was to make it all the way down Connecticut, where he would be officially ordained by Francis Asbury himself, the leader of all Methodists in North America, and to plant new churches everywhere they went along the way. McColl preached in Machias, Steuben, Blue Hill, Portland, Portsmouth, and Boston, all to great effect. Despite his popularity, he turned down multiple invitations to pastorates in major New England cities, preferring to return to the sparsely-settled region of the St. Croix Valley because he felt called to labor there, where there was a desperate need for sustained Christian ministry.

- At the outbreak of the War of 1812, which pitted the British against the Americans and turned the St. Stephen-Calais boundary into a potential war zone between two hostile powers, McColl took it upon himself to make sure that the war did not enter his home area. He convinced all local leaders to refuse to enter into hostilities against each other, and even convinced the army commanders of both the American and British sides to conduct their war elsewhere and leave it to the local leaders to maintain order in the St. Croix Valley. This was a remarkable success, and peace was kept throughout the duration of the war.

- In 1814, as the war was winding down, a revival broke out in the Christian communities where McColl ministered, adding many new believers to the faith in Calais and St. Stephen. Though there would be other challenges later on, McColl persisted diligently in his habit of preaching all throughout Charlotte and Washington counties, right up until his passing in 1830.
Quotes
On the Gospel and the Christian Life:

“O come all ye weary struggling souls and abandon yourselves as you are into the hands of the living God, and you will find him to be all love.”

“Oh, who would not be a Christian? It is the only happy life on earth!”

“I love to hear awakened sinners confessing their sins, and enjoying peace through faith in Jesus. However good and happy ‘frames of mind’ may be, I prefer faith, love, and obedience to any frame.”

“I consider myself a member of the mystical Church of Christ, and connected with the whole Church, and I intend to encourage the faith wherever I find it. I have nothing to do in this world but […] to promote the welfare of men and the glory of God on earth. Such has been and such is now my situation. In the Christian religion I firmly believe, and intend to follow it. I feel love and goodwill to all the faithful in Christ, for I consider them as a family which ought not to be divided, and I long for that day when there will be but one fold and one shepherd.”

“I am fully determined, as I have hitherto been, never to be the slave of any party as to doctrine or practice; but to consult God and his Word, and so make truth my standard, whatever men may say or think of me; for I see that a party spirit has almost ruined the Christian world.”

“I have made a point to examine the Word of God for myself, and never to embrace anything from other men; making the Scriptures my only book, my creed, and catechism.”

On War and Patriotism:

“I thank God whatever goodwill I possess to my own Government; I feel no enmity to the United States, nor to any other nation in the world, […] for my kingdom is not of this world, and my wish is to do good to all men and […] to support the lawful authority wherever I go.”

“The news of peace came to us [at the end of the War of 1812]; and now what cause of happiness, of thankfulness, and of praise to God for our preservation. Not one dollar’s worth of property was taken by violence from any man on the lines; neither was there any killed, wounded, or taken prisoner amongst us; but in room of judgments we had wonderful works of grace, such as we never saw in this country before.”

“I am resolved to face the storm, and to stand by the faithful little flock whom the Lord has preserved in the midst of these fiery trials, not doubting but what we shall see better days yet, even in this land of sorrow.”

“My constant object is to preach […] practical Christianity to a people destitute of the Word.”