Heroes of the Faith: Martin Luther 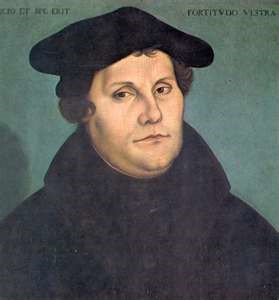 (Click here for an introduction and other installments of this series)
Lecture audio: Martin Luther
(click here to listen or right-click to download)
For in the gospel a righteousness from God is revealed, a righteousness that is by faith from first to last, just as it is written: “The righteous shall live by faith.” – Romans 1:17

For it is by grace you have been saved, through faith—and this not from yourselves, it is the gift of God—not by works, so that no one can boast. – Ephesians 2:8-9
Martin Luther: Basic Facts
- Martin Luther (1483-1546) was an Augustinian monk from Germany who became a priest and a professor of theology. He criticized the theological ideas of the Roman Catholic Church which had led to abuses like the sale of indulgences. He is credited with sparking the Protestant Reformation, which changed the course of Christian history in Europe.

- Luther is one of the most important figures of Christian history. For Protestants, his way of reading the Bible and thinking about faith were more influential than anyone else’s since the Apostle Paul.

- Luther’s influence extends far beyond theological ideas—he championed translating the Bible, using congregational singing in church, and putting the family at the center of Christian life.
Outline of Martin Luther's Life and Ministry: 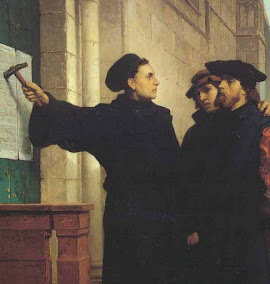 1505 – vows to become a monk; joins the Augustinian Order

1512 – becomes a doctor of theology at the University of Wittenberg

1518 – ordered to defend his theology before a church cardinal; released from Augustinian Order

1519 – comes to his final understanding of “the righteousness of God”

1520 – writes three seminal documents: To the Christian Nobility, On the Babylonian Captivity of the Church, and On Christian Freedom; a papal bull orders Luther to recant or be excommunicated; the works of Luther are burned by church officials; Luther burns the papal bull and other Catholic documents

1521 – refuses to recant at the Diet of Worms; he is excommunicated and becomes an outlaw; he is kidnapped by Prince Frederick of Saxony for his own protection and lives in hiding as “Knight George,” during which time he translates the New Testament into German

1522 – returns to Wittenberg; begins a series of theological debates in writing with Roman Catholics, Jews, and other Protestant Reformers which will continue until his death

- People are justified by God’s grace alone, through faith—not by pious works

- There are two kinds of righteousness—one that is imputed to us in full through faith in Christ, and another that we develop over time in our daily lives—hence people are “simul justus et peccator”: at the same time, justified and sinful

- The priesthood of all believers

- Clergy can be married

- Music should be used in church, especially in congregational hymns

- God wants us to enjoy, without guilt, the good things of this life
Quotes 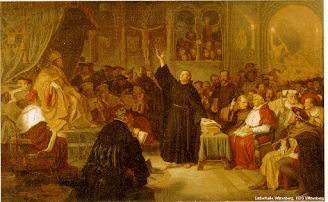 “I hated that word, ‘the righteousness of God,’ by which I had been taught according to the custom and use of all teachers ... [that] God is righteous and punishes the unrighteous sinner….At last, as I meditated day and night, I began to understand that ‘righteousness of God’ as that by which the righteous person lives by the gift of God….This immediately made me feel as though I had been born again, and as though I had entered through open gates into paradise itself. From that moment, I saw the whole face of Scripture in a new light. ... And now, where I had once hated the phrase, ‘the righteousness of God,’ I began to love and extol it as the sweetest of phrases, so that this passage in Paul became the very gate of paradise to me.”
“A simple layman armed with Scripture is to be believed above a pope or a cardinal without it.”

“The Bible is alive, it speaks to me; it has feet, it runs after me; it has hands, it lays hold of me.”

“Unless I can be instructed and convinced with evidence from the Holy Scriptures or with open, clear, and distinct grounds of reasoning, then I cannot and will not recant, because it is neither safe nor wise to act against conscience….Here I stand. I can do no other. God help me!” (Luther’s famous statement made at the Diet of Worms)

“Faith is a living, daring confidence in God's grace, so sure and certain that a man could stake his life on it a thousand times.”

“Faith is permitting ourselves to be seized by the things we do not see.”

“Not only are we the freest of kings, we are also priests forever, which is far more excellent than being kings, for as priests we are worthy to appear before God to pray for others and to teach one another divine things.”

“Temptations, of course, cannot be avoided, but because we cannot prevent the birds from flying over our heads, there is no need that we should let them nest in our hair.”

“The devil should not be allowed to keep all the best tunes for himself.”

“If our Lord is permitted to create nice large pike and good Rhine wine, presumably I may be allowed to eat and drink.”

“Of course, the Christian should love his wife. He is supposed to love his neighbor, and since his wife is his nearest neighbor, she should be his deepest love.”

When his neighbors laughed at him for helping out in “unmanly” ways like washing diapers: “Let them laugh. God and the angels are smiling in heaven.”

“People who do not like children are swine, dunces, and blockheads, not worthy to be called men and women, because they despise the blessing of God, the Creator and Author of marriage.”

“What is asserted without the Scriptures or proven revelation may be held as an opinion, but need not be believed.”

“Human nature is like a drunk peasant. Lift him into the saddle on one side, over he topples on the other side.”

“Farewell to those who want an entirely pure and purified church. This is plainly wanting no church at all.”

“Next to faith, this is the highest art: to be content in the calling in which God has placed you. I have not learned it yet.”

“Our Lord God must be a pious man to be able to love rascals. I can’t do it, and yet I am a rascal myself.”

“I have held many things in my hands, and I have lost them all; but whatever I have placed in God's hands, that I still possess.”

“To gather with God's people in united adoration of the Father is as necessary to the Christian life as prayer.”'