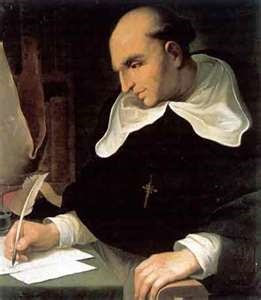 (Click here for an introduction and other installments of this series)
Lecture audio: Bartolomé de las Casas
(click here to listen or right-click to download)
“The Spirit of the Sovereign Lord is on me, because the Lord has anointed me to preach good news to the poor. He has sent me to bind up the brokenhearted, to proclaim freedom for the captives and release from darkness for the prisoners.”  – Isaiah 61:1

“Tainted are the gifts of him who offers a sacrifice of ill-gotten goods! Mock presents from the lawless do not win God’s favor. The Most High approves not the gifts of the godless, nor for their sacrifices does he forgive their sins. Like the man who slays a son in his father’s presence is he who offers sacrifice from the possessions of the poor….God hears the cry of the oppressed.”  - Ecclesiasticus (Sirach) 34:18-20, 35:13b (from the Old Testament Apocrypha)
Bartolomé de las Casas: Basic Facts
- Bartolomé de las Casas (1484-1566) was arguably the second most important figure in the Spanish settlement of the Americas, after only Christopher Columbus. In fact, during his own lifetime, he was more well-known, more loved and more hated, than Columbus ever was. Las Casas was a Catholic priest who took a dramatic stand against the exploitation of Native American peoples at the hands of European settlers. He was among the first to argue that all people, regardless of culture or ethnicity, were to be regarded with the full dignity, honor, and love due to the image of God in humanity.

- Las Casas is now best known through the writings he left behind, particularly his history of the Spanish conquest and his incendiary exposé, A Brief Account of the Destruction of the Indies.
Historical Background of European/Indian Interactions in the 16th Century: 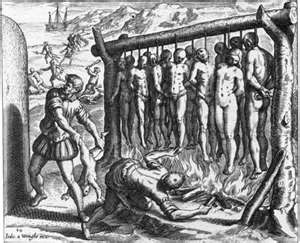 Columbus had opened the way for European settlement with his “discovery” of the New World in 1492. Columbus landed on the island of Hispaniola (modern Haiti & the Dominican Republic) and founded a small settlement there. Over the next few decades, the Spanish brutally killed or enslaved the native Indian population there, the Tainos. Added to these attacks was the introduction of European diseases. Within 50 years, the entire Taino nation was dead, with no survivors. A similar scene unfolded across the Caribbean, with almost every Arawak and Carib tribe completely wiped out. Overall, many historians now estimate that the losses to Native American populations in the 16th and 17th centuries, mostly due to European diseases, amounted to 80-95% of the total population—the largest demographic disaster in all of human history (worse than the Holocaust, the Black Plague, and all modern wars put together). Those that survived were usually enslaved in Spanish encomiendas and forced to work in the mines, digging gold and silver. Many Europeans at the time did not see anything wrong with this. They saw Native Americans as backward and barbaric, perhaps as sub-human, and rationalized that they were being a “civilizing influence” on them. They interpreted the deaths of Indian tribes as God’s hand, making a way open for them.
Timeline of Las Casas' Life and Ministry:
1502 – As a teenager, Las Casas emigrates with his father from Spain to the island of Hispaniola.

1510 – Las Casas joins the priesthood, becoming the first priest ordained in the New World. At the same time, however, he is also a slave-owner who runs his own encomienda.

1511 – Las Casas is deeply impacted by a brave sermon delivered by the Dominican friar Antonio de Montesinos, accusing the Spanish settlers of great crimes against the Indians and against God.

1512-1514 – Las Casas joins the Spanish expedition to Cuba, and witnesses a horrific massacre of Indians at Caonao. In 1514, inspired by Ecclesiasticus 34, he gives up his encomienda, sets his slaves free, and preaches his first sermon against the exploitation of the Indians.

1515-1516 – He travels back to Spain to plead the cause of the Indians before King Ferdinand. He is given authority to curb some of the exploitative practices and is named “universal protector of all the Indians.” In 1516, he travels back to the New World, but his reforms are ignored. 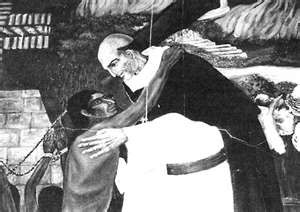 1517-1520 – He goes back to Spain again in an attempt to win entire protection for South America against Spanish incursions. He wins the support of the new king, Charles.

1521 – With his royal grant in hand, Las Casas tries to keep Spanish raiders away from the South American coast. They ignore him, and his missionary efforts in the area end in failure.

1522-1534 – Las Casas retires from the fight for awhile. He joins the Dominican order and lives as a friar, working on writing his History of the Indies. He also publishes The Only Way, advocating that love alone (not conquest or force) is the only method for bringing people to faith in Christ.

1535-1540 – He travels through central America and Mexico, preaching against Spanish abuses.

1541-1542 – Las Casas returns to Spain, engages in high-profile debates about Indian issues, and succeeds in getting King Charles to pass “The New Laws,” which protect the Indians and demand an end of the encomienda system.

1543-1547 – Las Casas serves as the bishop of Chiapas (southern Mexico/Guatemala), causing great anger when he refuses to hear confession from slave-holders and encomienda owners.

1547-1566 – Las Casas returns to Spain for the last time, and over the final two decades of his life continues debating, preaching, and writing books in attempts to win more freedom for the Indians.
Quotes from Las Casas:
“I desire that [my readers] would please consider whether such barbarous, cruel, and inhumane acts as these [which the Spanish have done] do not transcend and exceed all the impiety and tyranny which can enter the thoughts of man, and whether these Spaniards deserve not the name of Devils. For which of these two things is more desirable: whether the Indians should be delivered up to the devils themselves, or be tormented by the Spaniards? That is still a question.”
“The Indians are our brothers, and Christ has given his life for them.”
Email ThisBlogThis!Share to TwitterShare to FacebookShare to Pinterest
Labels: History
Newer Post Older Post Home