Heroes of the Faith: Cyril, Methodius, and the Conversion of Eastern Europe 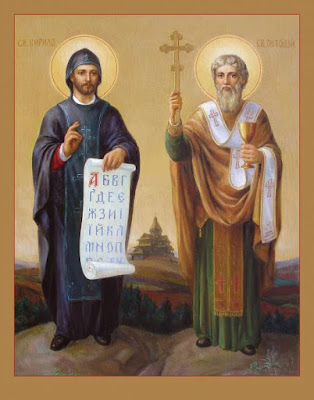 Now there were staying in Jerusalem God-fearing Jews from every nation under heaven. When they heard this sound [of the disciples’ preaching], a crowd came together in bewilderment, because each one heard their own language being spoken. Utterly amazed, they asked: “Aren’t all these who are speaking Galileans? Then how is it that each of us hears them in our native language?...We hear them declaring the wonders of God in our own tongues!”  – Acts 2:5-8, 11b

Live such good lives among the pagans that, though they accuse you of doing wrong, they may see your good deeds and glorify God on the day he visits us.  – 1 Peter 2:12

- Cyril and Methodius (9th century AD) were brothers who became missionaries to the pagan Slavs of eastern Europe. Cyril was a linguist and philosopher, one of the foremost intellectuals of the Byzantine Empire. Methodius, his older brother, was a monk who was involved in the highest circles of politics in Constantinople. Together they were dispatched to convert the Slavic peoples to the north. They invented a new alphabet with which to write down Slavic languages, translated the Bible and the Orthodox liturgy, and championed the use of native languages in worship rather than always using Greek or Latin.

Timeline of Their Life and Work:

848 AD – The brothers have grown up in northern Greece, close enough to Slavic-speaking populations in Macedonia to learn a bit of their language. But when Cyril is just fourteen years old, their father dies, and they are taken into the protection of one of the highest officials in the Byzantine Empire. He raises Cyril to be a philosopher and sets him on the career of a professor at the highest university in the realm. Meanwhile, Methodius becomes a prominent abbot.

860 – With his reputation as a scholar riding high, Cyril is designated by the emperor to be a foreign emissary. He is sent to the Muslim caliph of the Abbasid Empire, to explain the doctrine of the Trinity to Arab theologians. Later, he is sent out again, this time to the Khazars of central Asia, who were considering a mass conversion to Judaism.

862 – Despite having little success in the earlier missions, Cyril, this time with his brother Methodius, is called upon to go north into Moravia (now part of the Czech Republic). The king of Moravia, hoping to gain some political freedom from the powerful German areas to his west, had invited the Byzantine Empire to send in missionaries to convert his people to Christianity. Cyril and Methodius took advantage of the opportunity. They developed an alphabet, Glagolithic, which they could use to write down the language, Old Slavonic, which had previously been only a spoken language. Then they translated the Bible and introduced the Orthodox church rite to the new Christians of the area. Unlike the German Christians to the west, who were forced to use Latin in their services, these new Christians were given the freedom to learn and practice the faith in their own language.

867 – Under attack from German bishops who saw their mission as a foreign intrusion, Cyril and Methodius had to go to Rome to defend their practice. Pope Adrian II affirmed their ministry.

871 – Methodius is appointed archbishop of Moravia after Cyril’s death, but he is challenged and imprisoned for two and a half years by the Franco-German King Louis before being freed on order of the pope. The use of Slavonic instead of Latin is still highly controversial, but Methodius continues to use it throughout the 870s. During his ministry there, the region becomes almost entirely Christianized.

885 – Methodius dies, and the new pope decides to declare the Slavonic liturgy illegal. Methodius’ followers flee to Bulgaria, where they continue the work of converting the people of that country and teaching them to learn and practice the Christian faith in their own Slavic language. They take the alphabet Cyril devised and tweak it to produce “Cyrillic”—the alphabet still in use in Russian and most other eastern European languages. 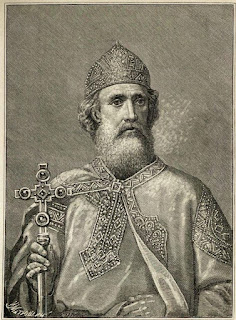 - Vladimir (958-1015) was the Viking-descendant ruler of a group of Slavic tribes around the area of Kiev (now the capital of Ukraine). Despite having been a thoroughgoing pagan in his early reign—having 800 concubines and thousands of idolatrous shrines, in addition to pursuing bloodthirsty political schemes against his own family members—he decided, perhaps for political reasons, that it would be good to convert his kingdom to a major religion. So he sent out emissaries to study Judaism, Islam, the Roman Catholicism of the Germans, and the Orthodox Christianity of the Byzantine Empire. The reports from the first three emissaries were not impressive; but the emissaries who returned from Constantinople, where they saw an Orthodox church service, reported: "We no longer knew whether we were in heaven or on earth, nor have we ever seen such beauty, and we know not how to tell of it." So, because of the beauty they had seen, the Rus became Orthodox Christians, and this event is considered the founding of Russia itself.
Posted by Matthew Burden at 5:00 AM