Heroes of the Faith: Columba and the Celtic Missionaries 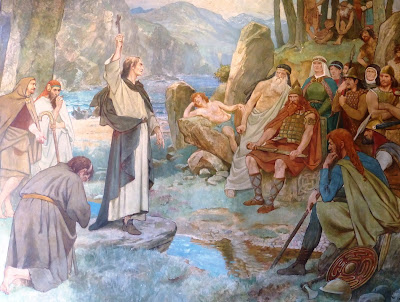 
They devoted themselves to the apostles’ teaching and to the fellowship, to the breaking of bread and of prayer….All the believers were together and had everything in common….And the Lord added to their number daily those who were being saved. - Acts 2:42, 44, 47b

My brothers, as believers in our glorious Lord Jesus Christ, don’t show favoritism….Has not God chosen those who are poor in the eyes of the world to be rich in faith and to inherit the kingdom he promised to those who love him? – James 2:1, 5 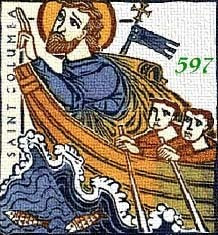 - Columba (521-597 AD) was an Irish monk and missionary who sought to bring the Christian faith to the people of Scotland. While Ireland had already been largely Christian for a century at the time, Scotland had never been evangelized. Columba and his followers formed the first wave of a Celtic missions movement that would eventually reach not only Scotland, but re-introduce the faith into England and France as well.

- Columba’s missionary method was based on a monastic model. In every journey he undertook, he always brought a team of fellow monks with him. They would found a new monastery, equip the local monks to continue the work of evangelization and discipleship, and then move on. Most famously, he founded a monastery on the island of Iona, which became a training-school for missionaries.

“Lord, be a bright flame before me; be a guiding star above me; be a smooth path below me; be a kindly shepherd behind me; today and evermore. Amen.”

“Alone with none but thee, my God, I journey on my way. What need I fear, when thou art near, O king of night and day? More safe am I within thy hand than if a host did round me stand.”

- Columbanus (543-615 AD) was also an Irish missionary-monk, who sailed to Gaul (modern France) and founded a string of mission-monasteries that helped to reintroduce orthodox Christianity to the local population, which held to a mix of pagan beliefs and heretical Christian dogmas.

- Columbanus and his monastic movement won him both friends and enemies in Gaul. The local people were converted so quickly that his monasteries had to expand and multiply to house all the new monks. By the second generation of this movement, more than 100 of these monasteries had been founded across Gaul and the Alps. But Columbanus also faced opposition, both from the local royalty (which he angered by speaking out against their sins) and from the local bishops (who resented the success of his ministry). Driven out by his enemies, he eventually took the Gospel into unreached parts of the Alps (present-day Switzerland) before settling in northern Italy.

- Columbanus’ monasticism left a lasting mark on Christian traditions: he was the one who pioneered “confession” as a private ritual between a layman and a priest. Until that point confession and penance had been a far more public part of Christian practice (which had become problematic because it tended toward legalism rather than grace).

“Grant me, O Lord, the lamp of love which never grows dim, that it may shine in me and warm my heart, and give light to others through my love for them, and by its brightness we may have a vision of the Holy City where the true and inextinguishable light shines: Jesus Christ our Lord. Amen.” 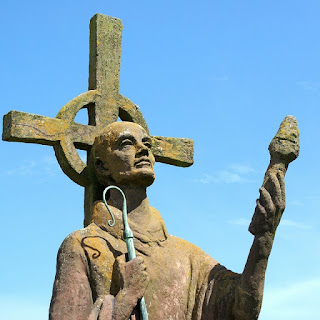 - Aidan (d. 651 AD) was an outstanding missionary in the tradition of Columba. He lived as a monk in the monastery at Iona until King Oswald of Northumbria (north-east England) requested a missionary for his people, who still held to the pagan religions of their Germanic ancestors. Aidan answered the call and founded a mission-monastery on the island of Lindisfarne, just off the coasts of Northumbria and Scotland. From there he undertook walking-tours in which he made friendships and taught the Gospel to all those he met, both rich and poor. King Oswald personally accompanied him on many of these evangelistic tours and served as Aidan’s translator. By the time of his death, Northumbria was largely converted.

A quote from Cuthbert of Lindisfarne, one of Aidan’s disciples: “What am I lying here for? God will certainly have heard the prayers of so many good men. Fetch me my shoes and stick!”

Aidan was known to be incredibly generous. Once, King Oswin (Oswald’s successor) gave Aidan the gift of a thoroughbred horse with all the royal trappings—a tremendously valuable gift in that day and age. As Aidan rode away, he came across a poor man begging for alms. Since he didn’t have any money to give, Aidan simply gave the poor man the horse and its trappings. When Oswin found out about this and protested against Aidan’s poor use of such a valuable gift, Aidan replied, “That man, made in the image of God, is of far more value than your fine horse.”