Heroes of the Faith: Bernard of Clairvaux 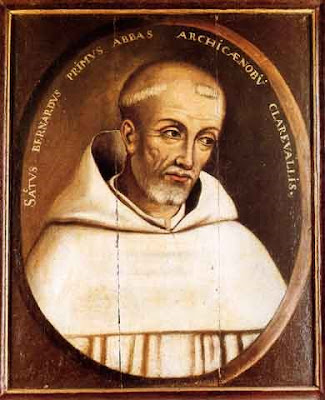 Let him kiss me with the kisses of his mouth—for your love is more delightful than wine.  – Song of Solomon 1:2

- Bernard of Clairvaux (1090-1153) was one of the leading lights of the High Middle Ages, a monastic reformer, preacher, and writer whose influence shaped the course of European history and who remains one of the most-read Christian thinkers to this day.

- Bernard was extremely active for a medieval monk, entering public debates about monastic rules and the academic pursuit of theology. He was also a leading voice against several new heresies and in the culmination of the Second Crusade (in which he spoke out both as a recruiter and as an advocate against anti-Semitic violence), as well as being a supporter and mentor of several popes.

- Bernard’s writings are centered on the personal experience of the love of God. His most famous works are the classic treatise, On Loving God, and a series of sermons on the Song of Solomon.

Timeline of Bernard's Life and Ministry: 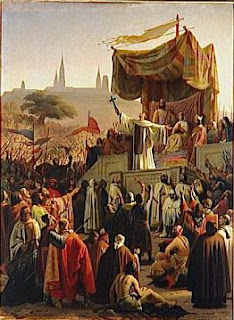 1113 – As a young man of 23 from a noble French family, Bernard decided to join the newly-founded order of Cistercian monks. The Cistercians were a reform movement within monasticism, trying to bring its monks back in line with the ideals of the original founder, Benedict (6th century AD). Bernard joined the abbey of Citeaux, and managed to convince 30 others from among his friends and family to become monks along with him.

1115 – Bernard was such an exemplary monk that after less than three years at Citeaux, he became the abbot and founder of a new abbey at Clairvaux. (During his career as abbot, he would become the leading voice of the Cistercian order, and would personally found over 70 new monasteries and promote the founding of another 100.)

1120s – Bernard writes many of his most famous treatises, including The Steps of Humility and Pride and On Loving God.

1127 – Bernard writes On the Duties and Conduct of Bishops, launching him into a debate about the appropriate behavior of clergy in an era when many bishops had become greedy landlords.

1128 – A new semi-monastic order, the Knights Templar, is established, with a mission of protecting pilgrims visiting the Holy Land. Bernard is intimately involved in the founding of this new order and becomes an outspoken proponent of its aims.

1130-1138 – After Pope Honorius II dies, an eight-year schism ensues between rival new popes. Bernard weighs into this fight in support of Innocent II, and is instrumental in securing his victory.

1139 – Bernard joins a debate against Abelard, who advocates a radical new approach to doing theology—making it the purview of academics rather than priests, and opening it to a new spirit of questioning. Bernard’s side wins (for the time being) and Abelard is condemned.

Quotes and Thoughts from Bernard of Clairvaux: 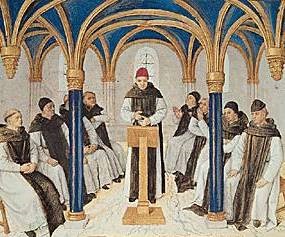 “The reason for loving God is God Himself….When someone asks, ‘Why should I love God?’ he may mean, What is lovely in God? or What shall I gain by loving God? In either case, the same sufficient cause of love exists, namely, God Himself.”

“In the first creation God gave me myself; but in His new creation He gave me Himself, and by that gift restored to me the self that I had lost. Created first and then restored, I owe Him myself twice over.”

“Righteousness is the natural and essential food of the soul, which can no more be satisfied by earthly treasures than the hunger of the body can be satisfied by air. If you should see a starving man standing with mouth open to the wind, inhaling draughts of air as if in hope of gratifying his hunger, you would think him a lunatic. But it is no less foolish to imagine that the soul can be satisfied with worldly things.”

“Here indeed is appeasement without weariness; here never-quenched thirst for knowledge, without distress; here eternal and infinite desire which knows no want; here, finally, is that sober inebriation which comes not from drinking wine but from enjoying God. The fourth degree of love is attained forever when we love God only and supremely, when we do not even love ourselves except for God’s sake; so that He Himself is the reward of them that love Him, the everlasting reward of an everlasting love.”

The Four Steps of Love (from "On Loving God")

(Initial Beginnings of the Sin of Pride)
1. Curiosity about what is not one's proper concern
2. Light mindedness: chatter and exclamation about things which do not matter
3. Laughing about nothing; foolish merriment
4. Boasting and talking too much
5. Trying to be different: claiming special rights
6. Thinking oneself holier than others
7. Interfering presumptuously with the affairs of others
8. Self-justification: defending one's sinful actions
9. Insincere confession
10. Rebelling against superiors
11. Feeling free to sin
12. Habitual sinning
(Worst and Fullest Form of Pride)

(Initial Beginnings of Humility)
12. Containment of one's interests, which shows itself in a humble bearing and lowered eyes
11. Quiet and restrained speech
10. Reluctance to laugh
9. Keeping silent unless asked to speak
8. Regarding oneself as having no special rights in the community
7. Thinking oneself less holy than the others
6. Thinking oneself unworthy to take initiative
5. Confessing one's sins
4. Patience in the face of accusation
3. Submission to superiors
2. Desiring no freedom to exercise one's will
1. Constant watchfulness against sin
(Best and Fullest Form of Humility)