Heroes of the Faith: Patrick and the Medieval Missionaries 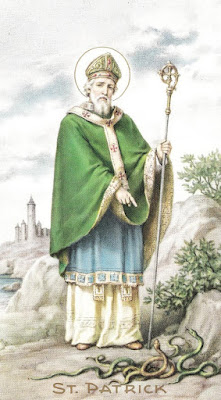 “Then Jesus came to them and said, ‘All authority in heaven and on earth has been given to me. Therefore go and make disciples of all nations, baptizing them in the name of the Father and of the Son and of the Holy Spirit, and teaching them to obey everything I have commanded you. And surely I am with you always, to the very end of the age.’”  – Matthew 28:18-20

“After this I looked and there before me was a great multitude that no one could count, from every nation, tribe, people and language, standing before the throne and in front of the Lamb.”  - Revelation 7:9 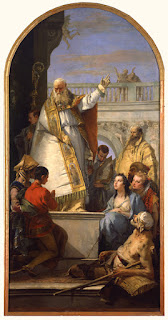 - Patrick grew up in a Christian family in Wales, and lived from about the late 4th century to the late 5th century.

- He was captured by Irish raiders and taken to Ireland as a slave when he was a young man. He spent 7 years in captivity there, escaped, but later came back as a missionary.

- He is credited with being the first person to bring the Gospel to Ireland, and is famous for driving the snakes from Ireland (probably a mythical event) and for using the three-leafed clover to explain the Trinity.

- He was the first Christian leader to make the case that the Great Commission (Matt. 28:18-20) was the duty of all Christians: “For after recognizing God, our way to repay him is to exalt him and confess his wonders before every nation under heaven.” (Confessio 3)

- If one word could characterize Patrick’s reason for becoming a missionary, it would be gratitude.

“Who was it that summoned me, a fool, from the midst of those who appear wise and learned? Me, truly wretched in this world, he inspired before others that I could be—if I would—such a one who, with fear and reverence, and faithfully, without complaint, would come to the people to whom the love of Christ brought me and gave me in my lifetime, if I should be worthy, to serve them truly and with humility.” (Confessio 13)

“I ought not to conceal God’s gift which he lavished on me in the land of my captivity, for then I sought him resolutely, and I found him there….I am greatly God’s debtor, because he granted me so much grace, that through me many people would be reborn in God….Therefore may it never befall me to be separated by my God from his people whom he has won in this most remote land.” (Confessio 33, 38, 58) 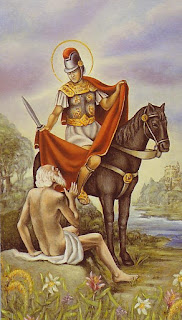 - Martin was one of the most influential of the early medieval missionaries. He served as bishop of Tours (in France) in the latter half of the 4th century. While other bishops of that age were content to spend their time at home, he made himself a missionary to his entire area.

- Martin was a military officer before becoming a baptized Christian. In one story, he saw a beggar in need of clothes on the side of the road as he was riding along, and he tore his officer’s cloak in half in order to give something to the beggar. Later, Martin saw a vision where Christ was wearing the robe he had given to the beggar.

- He left the army, but he never left behind its militaristic way of thinking. (“Hitherto I have served Caesar as a soldier: allow me now to become a soldier of God.”) He evangelized the rural hinterlands aggressively, facing pagan religion head-on and performing many miracles through the power of God.

- The influence of people like Patrick and Martin sparked one of the greatest mission movements in Christian history: the Irish and Anglo-Saxon missionaries of “the Dark Ages.” They spread the Gospel throughout Britain (through the ministry of men like Aidan), France (Columbanus), the Low Countries (Willibrord), Germany (Boniface), and into Scandinavia (Anskar). 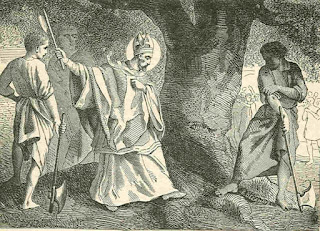 - Boniface was another notable missionary—a church leader who evangelized among the pagan tribes of Germany during the 7th and 8th centuries.

- One of Boniface’s most famous acts came when he dared a pagan god to strike him dead as he cut down the god’s sacred oak tree (much like the story of Elijah at Mt. Carmel).

- “Can there be a more fitting pursuit in youth or a more valuable possession in old age than a knowledge of the Scriptures? In the midst of storms it will preserve you from the dangers of shipwreck and guide you to the shore of everlasting bliss.” (Letter to Nithard)

Posted by Matthew Burden at 6:50 AM