Heroes of the Faith: Cyril of Alexandria and the Coptic Church 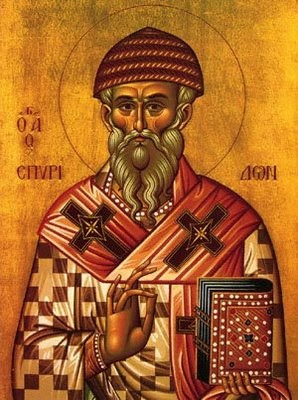 Lecture audio: Cyril of Alexandria and the Coptic Church
(click here to listen or right-click to download)

“I pray also for those who will believe in me…that all of them may be one, Father, just as You are in me and I am in You…I have given them the glory that you gave me, that they may be one as we are one: I in them and You in me. May they be brought to complete unity to let the world know that You sent me and have loved them even as You have loved me.”  – John 17: 20b-23

In that day there will be an altar to the Lord in the heart of Egypt, and a monument to the Lord at its border....So the Lord will make himself known to the Egyptians, and in that day they will acknowledge the Lord.”  - Isaiah 19:19, 21

- The Coptic Church is a family of Christians centered in Egypt, led by the Pope of Alexandria. They trace their roots back to Pentecost, when Jews from Alexandria became Christians; and the church itself was officially founded in AD 41 through the work of the Apostle Mark. Throughout the first few centuries of church history they were the greatest intellectual and theological powerhouse in the Christian world, producing early church fathers like Clement, Origen, and Athanasius; as well as driving the first wave of the great monastic movement that revolutionized Christian piety and practice.

- In the 5th century, Cyril of Alexandria (AD 376-444) became the leader of the church in Egypt. He is one of the most famous early church fathers because of his role in defending the faith against errors concerning the nature of Christ’s incarnation, which culminated in the great Council of Chalcedon in 451.

Timeline of the Chalcedonian Controversy:

428 – Nestorius, a clergyman from the theological school of Antioch, is appointed to be the Patriarch of Constantinople. While there he causes controversy by teaching that Christ had two distinct natures—a full human nature, with a human soul, mind, and will, as well as a full divine nature—held together in one person. This position runs afoul of the theology being taught in Alexandria, which held instead that Christ had one united nature, born from a divine nature and a human nature and producing the unique, fully-human-and-divine nature of the Incarnate Logos. This question, of whether Christ had two distinct natures or one united nature, would set the agenda for the next two great church councils.

431 – The Council of Ephesus – Cyril, the bishop of Alexandria, objects so forcefully to Nestorius’ teachings that eventually the Emperor is compelled to call a church council to settle the matter. Cyril and his friends convene the meeting without waiting for the late-arriving parties from Syria (who favored Nestorius) and Rome (who were neutral), and have Nestorius deposed. Then the Syrian delegation arrives, holds its own meeting, and reverses the decision. Then the Roman delegation arrives, convenes another session, and decides to ratify Cyril’s first meeting. 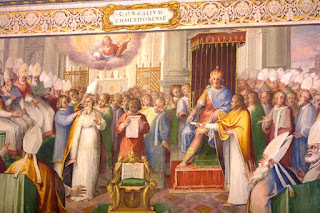 444-449 – Cyril, the champion of Alexandrian theology, dies. But then his theology is take one step further by Eutyches, who claims that the human nature in Christ has been completely subsumed into the divine nature. Another imperial council was convened at Ephesus, and Eutyches was upheld by the emperor’s decision. However, this decision was not consented to by the majority of the churches, and it came to be known as “the Robber Synod.”

451 – The Council of Chalcedon – Two years later, at another council, the decision of the Robber Synod was disallowed, and it was decided that Eutyches had gone too far. A new creed was written which upheld Christ’s two natures, but undivided. This became the standard understanding of the Incarnation for all Eastern Orthodox, Roman Catholics, and Protestants. The two main adversaries in the controversy, however—Nestorius’ allies in Syria and further east, and the Alexandrian followers of Cyril—found the Chalcedonian Creed unacceptable. This led to the first permanent church split in history—the “Church of the East” in Syria and Persia followed Nestorius’ position, and the “Coptic” church in Egypt followed their preferred “one-united-nature” formula, thus breaking communion with the other churches. This rift in the Body of Christ has never been fully healed.

Quotes from Cyril of Alexandria:

“It is held, therefore, that there is in Emmanuel two entities, divinity and humanity. Yet our Lord Jesus Christ is nonetheless one, the one true Son, both God and man; not a defied man on the same footing as those who share the divine nature by grace, but true God who for our sake appeared in human form.”

“Only if it is one and the same Christ who is consubstantial with the Father and with men can he save us, for the meeting ground between God and man is the flesh of Christ.”

An Extract from the Chalcedonian Creed:

“Our Lord Jesus Christ is to us One and the same Son, Perfect in Godhead, Perfect in Manhood; truly God and truly Man…co-essential with the Father according to the Godhead, co-essential with us according to the Manhood; like us in all things, except for sin…acknowledged in Two Natures unconfusedly, unchangeably, indivisibly, inseparably; the difference of the Natures being in no way removed because of the Union, but rather the properties of each Nature being preserved, and concurring into One Person.” 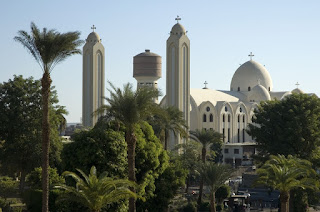 The Coptic Church after Chalcedon

By the 5th century, Christianity was the overwhelmingly dominant religion of Egypt, and it continued to be a major center of monastic spirituality. Christianity would continue to be the majority religion there for another four or five centuries, even after invaders from the new religious empire of Islam took over political control. For much of their history, Coptic Christians enjoyed great tolerance under their Muslim rulers, who persecuted them far less than the Byzantine Christians had after Chalcedon. Nevertheless, Islam was the religion of the ruling elites, and so, generation after generation, more and more of the population became Muslim in order to move up the social ladder and to avoid tax penalties. Now Coptic Christians make up around 10% of the population of Egypt (still more than the churchgoing population of many European countries). 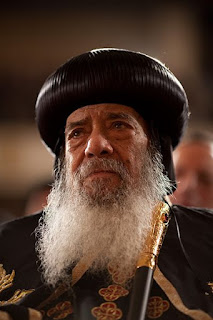 Shenouda III (1923-2012) was the Pope of Alexandria and leader of the world’s Coptic Christians for four decades, from 1971 to 2012. He began his ministry as a monk, and, just like the desert fathers from the 3rd and 4th centuries, he spent six years living as a hermit in a cave, focusing on prayer and contemplation. Later, as a priest, he radically improved the youth outreach programs of the Coptic Church. When he became pope, he quickly became known as a wise and respected leader. Though he spoke out against the rise of fanatical Islamism, he was highly esteemed by the Muslim rulers of Egypt and neighboring countries. He worked tirelessly to protect the Coptic Christian communities from abuses and to deepen their spiritual life. Notably, he became the first head of the Coptic Church since the Council of Chalcedon (a span of more than 1500 years!) to visit the heads of the Eastern Orthodox and Roman Catholic churches, and together they came to a tentative agreement that the millennia-old divisions were more about semantics than substantive theological differences.
Posted by Matthew Burden at 5:00 AM