Heroes of the Faith: Benedict 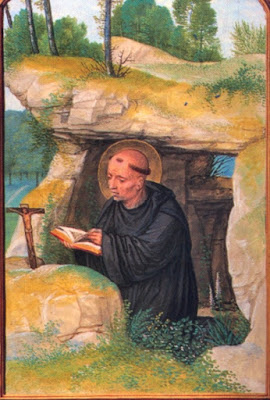 “How good and pleasant it is when brothers live together in unity!”  – Psalm 133:1

“They devoted themselves to the apostles’ teaching and to the fellowship, to the breaking of bread and to prayer. Everyone was filled with awe, and many wonders and miraculous signs were done by the apostles. All the believers were together and had everything in common. Selling their possessions and goods, they gave to anyone as he had need. Every day they continued to meet together in the temple courts. They broke bread in their homes and ate together with glad and sincere hearts, praising God and enjoying the favor of all the people.”  - Acts 2:42-47a

- Benedict of Nursia lived from 480 to 547 AD in Italy, while the western Roman Empire was being taken over by waves of Germanic invaders.

- He left behind a life of wealth and worldly influence when he was a young man, and became a hermit living a life of prayer in a cave in the wilderness.

- Later, he founded a series of small monasteries, including the one where he would spend the rest of his life—Monte Cassino, which is still active as a monastery in Italy today.

- His greatest accomplishment and legacy is the Holy Rule he wrote and implemented—a handbook of rules and practices for monks. This little book shaped the practice of western monasticism, which would become one of the most effective forms of Christian ministry for the next thousand years. 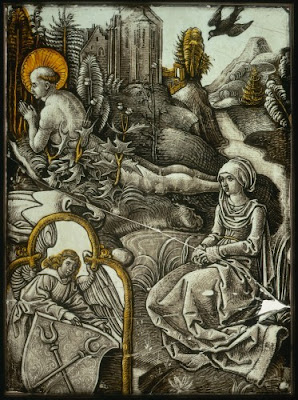 - The way of the Christian involves hard discipline, but it is a way of great joy:

“Even if, in order to correct sins or to preserve love, we are directed to do something which seems a little stringent, we shouldn’t immediately fly away in dismay from the way of salvation, because that way is ‘the narrow road,’ and cannot but be narrow. But as we advance in the Christian life and faith, we shall run the way of God’s commandments with expanded hearts and unspeakable sweetness of love.”

“Having ascended in the degrees of humility, the monk will arrive at that love of God which casts out all fear. Because of this love, all the good works which he formerly did out of fear, and with great toil, he will now begin to keep without any effort, and as it were, naturally by force of habit, no longer from the fear of hell, but from the love of Christ, from the very habit of good and the pleasure of virtue.”

A few selections from Benedict’s list of “The Instruments of Good Works” (73 in all)—
- In the first place, to love the Lord God with the whole heart, soul, and strength
- To honor all people
- To love fasting
- To prefer nothing to the love of Christ
- To refer whatever good one sees in himself, not to himself, but to God
- But if he sees any evil in himself, let him be convinced that it is his own, not God’s, and charge it to himself
- To keep death before one’s eyes daily
- Not to desire to be called holy before one is, but to be holy first, that one may be truly so called
- And never to despair of God’s mercy

“Let the monks, therefore, practice virtuous zeal with most ardent love; namely, that they forerun each other in honoring one another. Let them bear one another’s infirmities, whether of body or mind, with the utmost patience; let them vie with one another in obedience. Let no one follow what he thinks useful to himself alone, but rather to another. Let them practice fraternal charity with a chaste love. Let them fear God and love their Abbot with sincere and humble affection; let them prefer nothing whatever to Christ, and may He lead us all together to life everlasting.”

“Nothing is so contrary to Christians as excess.”

Benedictine spirituality is summed up by the words ‘ora et labora’ (‘prayer and work’): “Idleness is the enemy of the soul; and therefore the brethren ought to be employed in manual labor at certain times; at others, in devout reading and prayer.”

Benedictines hold 8 separate prayer services each day (including one in the middle of the night!), revolving around praying the Psalms.