Heroes of the Faith: John Chrysostom 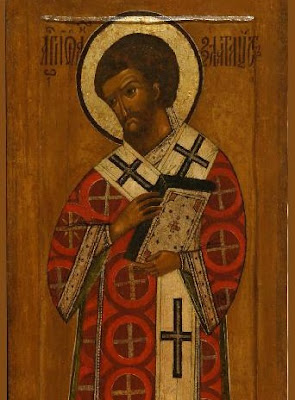 When you are brought before synagogues, rulers, and authorities, do not worry about how you will defend yourselves or what you will say, for the Holy Spirit will teach you at that time what you should say.”  - Luke 12:11-12 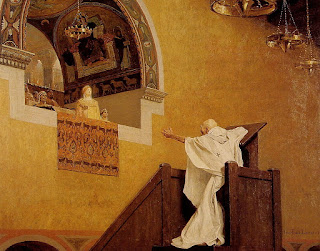 - John Chrysostom (349-407 AD) was one of the leading church fathers in eastern Christianity, as important to the eastern tradition as Augustine was to the west. Eastern Orthodox Christians still recite his version of the liturgy every week. He was widely known as a brilliant Bible-teacher and preacher (his nickname means “golden-mouth”), and more than 600 of his sermons have survived.

- John preached in two of the leading cities of the Eastern Roman Empire: Antioch, where he served for 14 years, after which he was abducted, taken to Constantinople, and forced to become Archbishop.

- John served as the Archbishop of Constantinople at a time when it was a very prestigious and very dangerous position to hold. Because of his forthright manner of speaking and his simple style of living, he quickly made enemies among his fellow priests, other archbishops, the wealthy people of the city, and the Empress herself.

363-367 – A promising young man from a well-connected family, John studies rhetoric and literature under the best classical teacher of his day, Libanius. He decides, however, to pursue a life of ministry rather than law, and is baptized in 368.

372 – John goes to study with Diodore of Tarsus, a scholar who leads the “School of Antioch,” which emphasizes the literal interpretation and practical application of Scripture. After this, John spends a few years fasting and praying, living the life of a hermit.

378-381 – He begins his active ministry, first as a lector, then as a deacon in Antioch. In 381 he finds out that he is about to be seized and thrust into ordination as a priest without his consent. He doesn’t feel ready for this, so he goes into hiding.

385 – He finally submits to being ordained as a priest, and works to heal a rift between rival factions in the church. He now begins his preaching ministry, and immediately wins recognition and fame, especially for his homilies on poverty and on uncompromising faith.

398 – After 14 years of preaching in Antioch, the royal eunuch Eutropius selects him to be the next Archbishop of Constantinople. John is seized, taken secretly from Antioch, and is ordained upon his arrival in the capital city. He accepts these events as the providence of God.

399 – His first years at Constantinople win him immediate fame for his preaching, but also a good deal of enmity from those in power. He speaks plainly about the sins of greed and power-grabbing that he sees around him, and he refuses to play the expected role of Archbishop by hosting lavish parties and living in luxury. Instead, he uses the excess funds to build hospitals.

402-403 – John gives refuge to a group of Egyptian monks who appealed to him for help; in response he is attacked as a heretic by the jealous Archbishop of Alexandria. The Empress Eudoxia seizes her chance and allows John to be convicted and deposed; but this is immediately followed by riots and an earthquake, which convinces her to reverse the decision.

404 – Once again John runs afoul of the Empress by aiming his sermons a little too directly at her; so he is deposed again and exiled to the mountainous wilderness of eastern Turkey. He dies three years later. 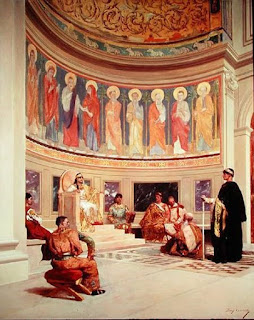 “I know my own soul, how feeble and puny it is: I know the magnitude of this ministry, and the great difficulty of the work; for more stormy billows vex the soul of the priest than the gales which disturb the sea.”

“Riches are not forbidden, but the pride of them is.”

“The rich man is not one who is in possession of much, but one who gives much.”

“It is foolishness and a public madness to fill your closets with clothing and allow men who are created in God’s image and our likeness to stand naked and trembling with the cold.… You are large and fat, you hold drinking parties until late at night, and sleep in a warm, soft bed. And do you not think of how you must give an account of your misuse of the gifts of God?”

“A comprehended god is no god.”

“By the cross we know the gravity of sin and the greatness of God's love toward us.”

“Prayer is an all-efficient panoply, a treasure undiminished, a mine which is never exhausted, a sky unobscured by clouds, a heaven unruffled by the storm. It is the root, the fountain, the mother of a thousand blessings.”
Email ThisBlogThis!Share to TwitterShare to FacebookShare to Pinterest
Labels: Devotional Reflections, History
Newer Post Older Post Home