Heroes of the Faith: Jerome 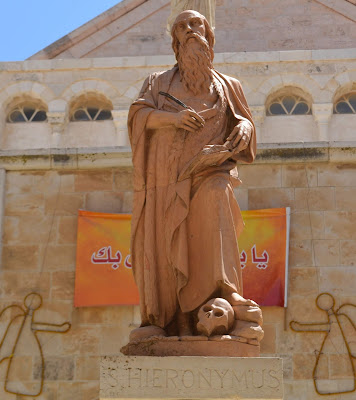 All Scripture is God-breathed and is useful for teaching, rebuking, correcting, and training in righteousness.  - 2 Timothy 3:16

- Jerome (331-420 AD) was one of the leading early church fathers in the late 4th and early 5th centuries (the Golden Age of Patristic Theology). He was acquainted with most of the other prominent church leaders of that day, including Augustine, Ambrose, John Chrysostom, Gregory of Nazianzus, and many more.

- His greatest contribution was his translation of the Bible into Latin (his version is known as the Vulgate). Although other Latin translations were available, his was the first to make careful use of the original Hebrew texts of the Old Testament.

- He was a prominent advocate for living a life of total devotion to God, and helped to popularize the monastic lifestyle in western Europe.

- Despite his prickly personality and his involvement in many controversies, he is remembered as one of the great “Doctors of the Church.” 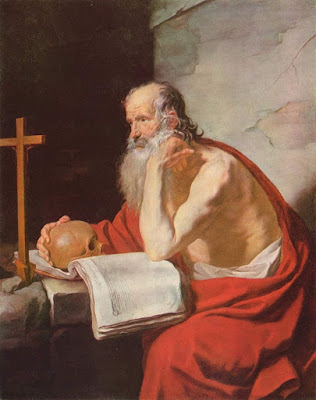 Timeline of Jerome's Life and Ministry:

350s – As a young man, Jerome moves from his hometown (in modern Croatia) to Rome, where he is given a rigorous classical education. He undergoes baptism at Rome, and for the rest of his life he uses the Church of Rome’s doctrinal positions as his theological foundation.

360s-early 370s – Jerome and some of his friends (including a close childhood companion, Rufinus) spend some time in the cities of Trier (northwest Germany) and Aquileia (northeast Italy). At first they appear to be trying to make a living as administrative officials, but little by little they become more and more drawn to a lifestyle of all-out commitment to Christ. They begin to experiment with total renunciation—living in voluntary poverty and devoting all their time to prayer and the study of Scripture.

373-379 – Now in his early 40s and having abandoned the idea of a secular career, Jerome travels east, into the Syrian desert. There he takes up residence with a famous community of hermits in Chalcis and lives the life of a “desert father” for a short time. Difficulties arise with the community, however, and he soon retreats to the home of a patron in Antioch, where he proceeds with his Scriptural and language studies.

379-382 – Jerome goes to Constantinople and studies with another great church father, Gregory of Nazianzus, while trying to advocate for the theological position of the Church of Rome at the great Council of Constantinople in 381, where some final disagreements about the exact doctrine of the Trinity are being worked out.

382-385 – Jerome seizes an opportunity to return to Rome, where he becomes a personal friend of Pope Damasus, for whom he serves as a scribe. While there, he is tasked with beginning to update the old Latin translation of the New Testament (which had not been a particularly good translation); he does so, but draws the ire of traditionalists who liked the old version, imperfect as it was. He also becomes a teacher-in-residence for a group of wealthy Roman women, led by Paula, who want to devote themselves to a life of Christian renunciation. Unfortunately, his passionate advocacy for that kind of lifestyle earns him a great deal of controversy from traditional Romans and other Christians, who feel that he is too extreme and is unfairly denigrating the holiness of Christian marriage.

385-420 – Driven out of Rome by these controversies, he and Paula, along with a few friends, emigrate to the Holy Land. They take up residence in Bethlehem, where they become the leaders of monastic communities near the site of Christ’s birth. There Jerome is free to pursue his life of ascetic Christian practice and scholarly writing. His fame begins to grow as he publishes commentaries on many books of the Bible, and he decides to undertake a vast translation effort, putting the Hebrew Old Testament into Latin for the first time (all previous Latin translations had been based on earlier Greek translations, not on Hebrew). He never ceases to be at the center of controversy, partly for his daring undertakings (such as using the Hebrew texts) and partly for his tendency to argue about theological minutiae (for example, he gets into major battles about the reception and value of the works of Origen, an earlier scholar). He also has an acerbic personality, which grates against almost everybody and often makes him sound petty and cruel in his writings. Nonetheless, he is the greatest stylist of the Latin language that had lived since the classical age, and his translation of the Bible eventually becomes the standard Scripture text for the whole of western Christendom for more than a thousand years.

“When we pray, we speak to God, but when we read, God speaks to us.”

“The Scriptures are shallow enough for a babe to come and drink without fear of drowning and deep enough for theologians to swim in without ever reaching the bottom.”
Email ThisBlogThis!Share to TwitterShare to FacebookShare to Pinterest
Labels: Devotional Reflections, History
Newer Post Older Post Home