Heroes of the Faith: Abba Moses 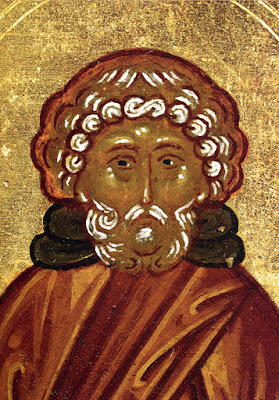 In your anger do not sin: Do not let the sun go down while you are still angry, and do not give the devil a foothold.  - Ephesians 4:26-27

Finally, be strong in the Lord and in his mighty power. Put on the full armor of God, so that you can take your stand against the devil’s schemes. For our struggle is not against flesh and blood, but against the rulers, against the authorities, against the powers of this dark world and against the spiritual forces of evil in the heavenly realms.  - Ephesians 6:10-12

- Abba Moses (330-405 AD, also called "Moses the Black" or "Moses the Strong" or "Moses of Ethiopia") was one of the early Desert Fathers whose total commitment to a lifestyle of prayer became an inspiration to many Christians across the Roman Empire.

- Although he started out as “the Terror of the Nile,” an infamous ringleader of a murderous band of brigands, after his conversion he became known for his spirit of peace, humility, and gentleness. He was often sought out for his discernment and wisdom.

- Today, there is renewed interest in Abba Moses as a symbol of the ancient African roots of Christianity. Of all the major world religions, Christianity has the longest claim to being the religion of Africa, and Moses stands as an inspiration to many African-ancestry Christians as they deal with the continued effects of racism and social violence. Groups like the Orthodox Christian “Brotherhood of St. Moses the Black” are using his story as a powerful tool in the ministry of racial reconciliation here in America.

Anecdotes & Quotes from the Life of Moses: 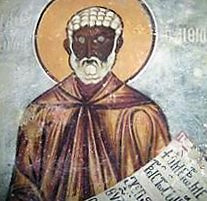 When Moses converted and began to live alone in his cell, his sinful youth haunted him and would not leave him in peace. The devil attacked him with lustful thoughts and sleepless nights. He became so certain that he would never be holy that he almost despaired. So Abba Isidore took him to the roof one morning. Together they watched the first rays of sunlight come over the horizon. Isidore instructed Moses, “Only slowly do the rays of the sun drive away the night and usher in a new day, and thus, only slowly does one learn to live a holy life.”

A brother at Scetis committed a fault. A council was called to which Abba Moses was invited, but he refused to go to it. Then the priest sent someone to say to him, ‘Come, for everyone is waiting for you.’ So he got up and went. He took a basket, filled it with sand and carried it with him. The sand ran through the holes and fell behind him as he walked. The others came out to meet him and said to him, ‘What is this, Father?’ The old man said to them, ‘My sins run out behind me, and I do not see them, and today I am coming to judge the errors of another.’ When they heard that they said no more to the brother but forgave him.

“The monk must die to his neighbor and never judge him at all.” – Abba Moses

It happened that Abba Moses was struggling with the temptation of lust. Unable to stay any longer in the cell, he went and told Abba Isidore. The old man exhorted him to return to his cell. But he refused, saying, ‘Abba, I cannot. I feel that all the armies of hell are arrayed against me.’ Then Abba Isidore took Moses out onto the terrace and said to him, ‘Look towards the west.’ He looked and saw hordes of demons flying about and making a noise before launching an attack. Then Abba Isidore said to him, ‘Look towards the east.’ He turned and saw an innumerable multitude of holy angels shining with glory. Abba Isidore said, ‘See, these are sent by the Lord to the saints to bring them help, while those in the west fight against them. Those who are with us are more in number than they are.’ Then Abba Moses gave thanks to God, plucked up courage and returned to his cell.

Early church historian Sozomen’s assessment of Moses’ life: “So sudden a conversion from vice to virtue was never before witnessed, nor such rapid attainments in monastic life. Hence God rendered him an object of dread to the demons.”

Blessed is he upon whom God shows mercy!
The mercy of God is joy, in both worlds joy!
Moses the Black as a prodigal son
Repented and returned to God,
With much weeping and much fasting.
He was black in his face and shining in his soul.
By many prayers he tamed his passions
And was freed from the Enemy’s sway.
His soul became as a lake atop the mountains
Which gazes into the heavens
And in which heaven mirrors its face.
The lion may change into the lamb,
But such a miracle only Christ performs.
Moses was a lion upon the mountain
And a gentle lamb became.
By his holy example,
May God spur us onto holy deeds as well.
Posted by Matthew Burden at 6:40 AM