Heroes of the Faith: Gregory of Nazianzus 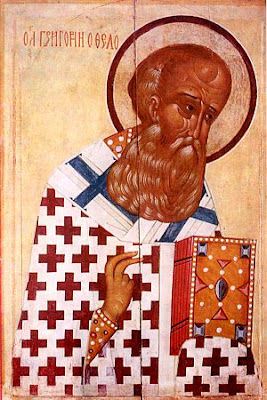 For there are three who bear witness in heaven: the Father, the Word, and the Holy Spirit; and these three are one.  – 1 John 5:7 (NKJV)

- Gregory of Nazianzus (c.329-c.390), also called “Gregory the Theologian,” was one of the three Cappadocian Fathers (along with Basil the Great and Gregory of Nyssa) and is honored as being among the first to explain the definitive doctrine of the Trinity.

- Although he was a classically-trained orator, he would have preferred a life of quiet study to the jobs of church politics and pastoral ministry. However, he obeyed God’s call and served in ministry for much of his life, including a brief stint as the Archbishop of Constantinople and as the president of the Second Ecumenical Council (381).

- His greatest contributions to Christianity have been through his sermons. Oration 2, “In Defense of His Flight to Pontus,” is the foundational patristic treatment of pastoral theology. And his “Five Theological Orations” became the definitive work on how to express what we believe about the Trinity.

Timeline of Gregory's Life and Ministry:

329 – Gregory is born into a Christian home. His father had just become the bishop of Nazianzus.

347 – After studying rhetoric in Caesarea (Cappadocia), Palestine, and Alexandria, he travels to Athens. There he makes a close friendship with Basil, a fellow Cappadocian.

357 – Gregory returns home to Nazianzus. He splits his time between joining his friend Basil in their monastic retreat and caring for his aging parents.

360 – His father stumbles into a bad decision by signing a theologically suspect creed, and the monks in Nazianzus rebel. Gregory returns home to pacify the situation, and earns a reputation as a great peacemaker.

361 – His aging father feels the need for a coadjutor in his duties, so he compels Gregory to become a priest. This was not what Gregory wanted, and he runs away.

362 – After staying with Basil for nearly four months, he returns to Nazianzus and takes up his new position as priest. His second sermon is an apology and defense for his actions, and it immediately becomes a classic—describing in beautiful and powerful terms the high calling of pastoral ministry.

365 – While refusing to take sides in the dispute between Basil and his bishop, Eusebius of Caesarea, Gregory works patiently to bring about a reconciliation between them.

370 – After Basil becomes the new bishop of Caesarea, he strongarms Gregory into taking up a position as bishop of Sasima, a tiny but strategic town. Gregory doesn’t want the post, but he goes there, only to be forced out shortly thereafter. This becomes a sore point between the old friends.

374 – Gregory’s father passes away, and Gregory stays on to help run the church until a new bishop can be found. Meanwhile, his speeches and writings are winning him fame as a great theologian.

379 – The struggling orthodox community in Constantinople calls on Gregory to come and be their pastor and to fight the heretical influences in the capital. He feels compelled to accept.

380 – The new emperor Theodosius, an orthodox Christian, kicks the heretical Arian Christians out of the churches of Constantinople and installs Gregory as archbishop in the great cathedral of Hagia Sophia.

381 – Gregory serves as president of the Second Ecumenical Council, which affirms the creed of Nicea (the orthodox creed). But because of church politics, Gregory is soon forced to resign. He returns home and spends the last few years of his life in seclusion. 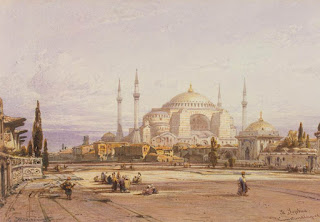 “It is more important to remember God than it is to breathe.”

“God accepts our desires as though they were of great value. He longs ardently for us to desire and love him. He accepts our petitions for benefits as though we were doing him a favor. His joy in giving is greater than ours in receiving. So let us not be apathetic in our asking, nor set too narrow bounds to our requests; nor ask for frivolous things unworthy of God's greatness.”

“The scope of our art is to provide the soul with wings, to rescue it from the world and give it to God, and to watch over that which is in his image: if it abides, to take it by the hand; if it is in danger, to restore it; if ruined, to make Christ to dwell in the heart by the Spirit; and, in short, to deify, and bestow heavenly bliss upon one who belongs to the heavens.”

“Faith, in fact, is what gives fullness to our reasoning.”

“The Son is the concise and simple revelation of the Father’s nature.”

“We have one God because there is a single Godhead. Though there are three objects of belief, they derive from the single whole and have reference to it. They do not have degrees of being God or degrees of priority over against one another…To express it succinctly, the Godhead exists undivided in beings divided. It is as if there were a single intermingling of light, which existed in three mutually connected suns.”