Heroes of the Faith: Ambrose 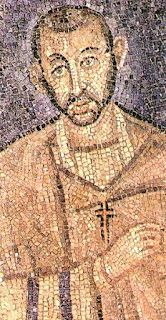 Who may ascend the mountain of the Lord? Who may stand in his holy place? The one who has clean hands and a pure heart, who does not trust in an idol or swear by a false god. They will receive blessing from the Lord and vindication from God their Savior. - Psalm 24:3-5

Therefore put on the full armor of God, so that when the day of evil comes, you may be able to stand your ground, and after you have done everything, to stand. - Ephesians 6:13

- Ambrose of Milan (340-397 AD) was one of the leading pastors in the Christian world during the 4th century AD, the “golden age” of the early church fathers.

- Born into an aristocratic family of Roman nobility, Ambrose was well-educated and trained for a career in politics before being thrust into pastoral ministry. His aristocratic social standing and political skills would serve him well even in ministry, because he became the leading voice of the church in several disputes against encroachments and abuses from the imperial state.

- He was known as one of the most eloquent speakers of his generation, and he used his ability to give influential sermons in defense of the orthodox Christian faith in an age when the Arian heresy was threatening to undermine biblical Christianity.

- Ambrose’s ministry attracted a young “seeker,” Augustine of Hippo, who had tried all the available religions of the ancient world after rejecting his childhood Christian faith. It was Ambrose’s influence that brought Augustine back to the church (his baptism is pictured below), and Augustine went on to become the most influential theologian in the entire history of the western Christian world.

Timeline of Ambrose's Life and Ministry: 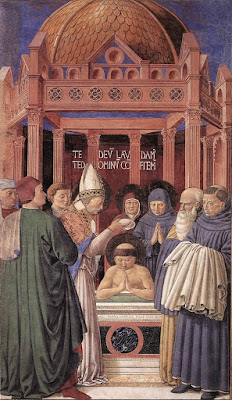 374 AD – Ambrose, 34 years old, the son of a former prefect of France, Spain, and Britain, has recently been appointed as the supreme civic magistrate of the areas around Milan, one of the most important imperial cities. Although raised as a Christian, he has never been baptized. In the year 374, the previous bishop of Milan dies, and the city is torn apart by rival factions (orthodox Christians and Arian Christians) who each want to appoint their own leader as the next bishop. Ambrose, as civic magistrate, goes to the cathedral to oversee the convocation and make sure no riots break out. As he stands up front, eloquently trying to keep the peace, a child’s voice is heard calling out: “Ambrose for bishop!” Immediately the crowd latches onto Ambrose as a “compromise candidate,” never mind the fact that he has never served in the ministry, much less been baptized! Ambrose tries to resist at first, but eventually submits to being baptized, ordained as a priest, and then elevated to being a bishop. His first official act as bishop is to sell almost all of his wealthy family estates and give the money to the poor.

377 AD – Ambrose has become widely regarded as a powerful defender of the orthodox Christian faith, and the eighteen-year-old emperor Gratian asks him to compose a book on the faith so that Gratian will not be swayed by the arguments of the Arians. Ambrose responds with his greatest theological works, the two books of his De Fide.

385-386 AD – Justina, the mother of the new emperor, Valentinian II, begins championing the Arian group in Milan, and is determined to secure one of the two churches in the city for their use. Ambrose resists all of these attempts, often by staging sit-in protests in the church while Justina surrounds the building with soldiers. Ambrose uses these opportunities to preach to the gathered soldiers and to have his congregations sing some of the many hymns he composed (these gatherings helped launch a whole new style of worship music across the western Christian world). Ambrose wins the stand-off after Justina and Valentinian II realize that most of their soldiers are fonder of Ambrose than of them. The imperial leaders then try to force Ambrose into a staged debate against a popular Arian speaker, and when Ambrose refuses, the imperials prepare to evict him from the city. But his congregation saves him by staging their own sit-in protest, surrounding him night and day until the imperials relent.

390 AD – A new imperial ruler has now taken over, the great emperor Theodosius, and Ambrose mentors him in a number of important political decisions. However, a mob riot breaks out in the northern Greek city of Thessalonica, leading to the deaths of the garrison commander and two officers. Emperor Theodosius responds by ordering a massacre of more than 7000 people. Ambrose, on hearing this news, refuses to admit the Emperor to worship in Milan cathedral, and the Emperor, at this rebuke, publicly repents and performs penance in the streets of Milan with groans and tears. 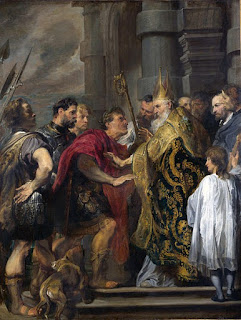 “In Christ we have everything. If you want to heal your wound, he is the doctor. If you are in need of help, he is strength. If you are in dread of death, he is life. If you are fleeing the darkness, he is light. If you are hungry, he is food: O taste and see that the Lord is good!”

“It is not enough just to wish well; we must also do well.”

“I do not fear to die, because we have a good Lord.”
Email ThisBlogThis!Share to TwitterShare to FacebookShare to Pinterest
Labels: Devotional Reflections, History
Newer Post Older Post Home